Complete elimination of HFCs by the year 2050 is estimated to prevent about 0.5 degree celsius rise in global temperatures by the end of this century. 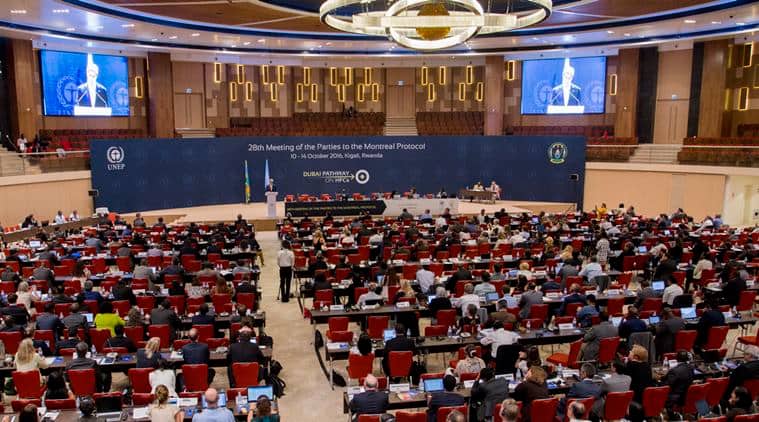 Secretary of State John Kerry, center-left at podium, delivers a speech to the 28th Meeting of the Parties to the Montreal Protocol on Substances that Deplete the Ozone Layer, in Kigali, Rwanda. (Source: AP)

The amendment will allow the use of ozone-saving Montreal Protocol to phase-out HFCs, a set of 19 gases in hydroflurocarbon family that are used extensively in air-conditioning and refrigerant industry. HFCs are not ozone-depleting but are thousands of times more dangerous than carbon dioxide in causing global warming.

The agreement came at 7  am local time after negotiators sat through the night to iron out their differences during which India and the United States fought over a number of provisions. But they had already agreed on the bigger issues on Friday during the two rounds of talks between Environment Minister Anil Madhav Dave and US Secretary of State John Kerry.

The amendment to the legally-binding Montreal Protocol will ensure that the rich and industrialised countries bring down their HFC production and consumption by at least 85 per cent compared to their annual average values in the period 2011-2013. A group of developing countries including China, Brazil and South Africa are mandated to reduce their HFC use by 85 per cent of their average value in 2020-22 by the year 2045. India and some other developing countries — Iran, Iraq, Pakistan, and some oil economies like Saudi Arabia and Kuwait — will cut down their HFCs by 85  per cent of their values in 2024-26 by the year 2047.

Complete elimination of HFCs by the year 2050 is estimated to prevent about 0.5 degree celsius rise in global temperatures by the end of this century. For this reason, the Kigali Amendment, as it is being called, is considered absolutely vital for reaching the Paris Agreement target of keeping global temperature rise to below 2 degree celsius compared to pre-industrial times.

The phase-out scheduled under the amendment is estimated to avert 70 billion tonnes of carbon dioxide equivalent emissions between 2020 and 2050. This is considered equivalent to shutting down more than 750 coal power plants, each of 500 MW capacity, or taking off about 500 million cars off the road from now to 2050.

The Kigali success was being hailed as the consolidation of the efforts that had seen the finalisation of the Paris Agreement in the French capital last year.

“This is a major breakthrough. The world has come together to curb climate-wrecking super-pollutant HFCs . This is the biggest step we can take in the year to after the Paris Agreement against the widening threats from climate change. And bringing HFCs under Montreal Protocol sends a clear signal to the global market place to start replacing these dangerous chemicals with a new generation of climate friendly and energy efficient alternatives,” David Doniger, Climate and Clean Air Program director of Washington-based Natural Resources Defense Council, said in a statement.

Just a few weeks ago, the International Civil Aviation Organisation, a UN body, had reached an agreement on reducing emissions from international aviation. And earlier this month, the Paris Agreement received the minimum required number of ratifications to come into effect from November 4, well before the start of the next round of climate talks in Marrakech three days later.

“What we have achieved in Kigali is the beginning. We can build on this success and further enhance the climate actions by countries in Montreal Protocol and in other climate agreements, especially the Paris Agreement,” Chandra Bhushan, deputy director general of Delhi-based Centre for Science and Environment, said.

Army officer’s remains brought to Kerala from Nagaland, after 24 years