The event has snowballed into a major controversy, with the police slapping charges of sedition against the protesters and the arrest of the JNU students’ union president. 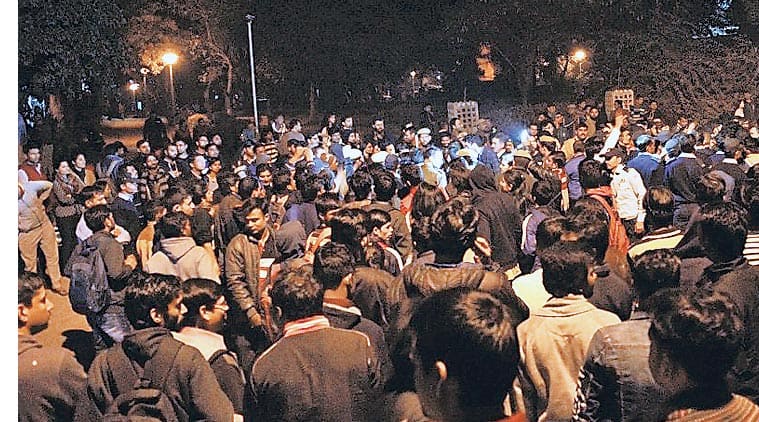 The clash occurred as a cultural evening organised in JNU drew to a close Tuesday. Express photo

On February 9, a group of Jawaharlal Nehru University (JNU) students organised a programme to mark the death anniversary of Parliament attack convict Afzal Guru, who was hanged. At the event, ‘anti-India’ slogans, including those demanding secession of Kashmir, were raised by some of the students. The event has snowballed into a major controversy, with the police slapping charges of sedition against the protesters and the arrest of the JNU students’ union president. This is what some of the student organisations had to say about the event:

Akhil Bharatiya Vidyarthi Parishad: We completely oppose such anti-national activities… All Left parties supported the organisers in one way or the the other. The slogans raised were even more unacceptable… the organisers should be booked and rusticated from the university.

All India Students’ Association: Some slogans raised in the programme were extremely divisive and reactionary and have nothing to do with concerns raised by a large section of civil society on capital punishment. We outrightly condemn such reactionary slogans.

All India Students’ Federation: We strongly condemn the inflammatory slogans that were raised. We do not subscribe to this position. We strongly believe in the Constitution of this country and uphold its ethos. But at the same time we strongly reject capital punishment.

Birsa Phule Ambedkar Students’ Association: We do not subscribe to the view held by the organisers of the event. Being Ambedkarites, we believe in the unity of the country and therefore of Kashmir. The slogans raised were condemnable.

Democratic Students’ Federation: The DSF was not an organiser of the programme. The concerned cultural programme on February 9 was organised by a group of students, with whom DSF has serious political differences in regard to violence and terrorism. We opposed capital punishment as a matter of principle. However, we do not believe in observing the martyrdom of those found guilty of terrorism.

National Students’ Union of India: We were not there that day because we don’t identify with the ultra-Left politics of secession of Kashmir. The slogans raised are highly condemnable. We knew that ABVP would try and deviate the Rohith Vemula issue which they did. But we oppose the way in which all Left and progressive organisations are being branded as anti-national by the ABVP.

Students’ Federation of India: SFI strongly condemns both the sides – on one hand the irresponsible slogans by a section and on the other hand RSS-ABVP’s assault on the freedom of expression. Both such forces are emboldening each other.