Union Home Minister Rajnath Singh appealed to the people of Kashmir to remain calm and maintain peace in the region. We're tracking the developments in Jammu and Kashmir as they happen. 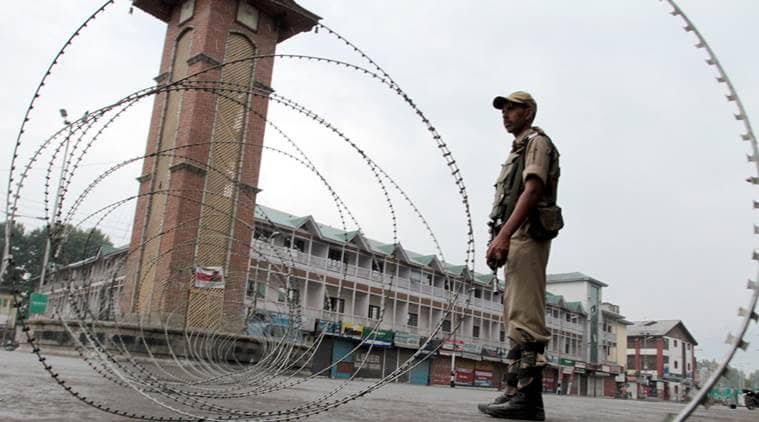 A paramilitary soldier stands guard near a barbed wire barricade during curfew in Srinagar. Express Photo by Shuaib Masoodi

A day after violent protest clashes in Jammu and Kashmir, over the gunning down of Hizbul Mujahideen poster boy Burhan Wani, a youth was killed on Sunday in fresh clashes between locals and security forces in Pulwama district, taking the death toll to 16 in the violence, which also left 200 people injured.

On Sunday afternoon, a policeman was killed after a mob pushed his vehicle into River Jhelum, news agency ANI reported.

Union Home Minister Rajnath Singh appealed to the people of Kashmir to remain calm and maintain peace in the region. “The Centre is working with the state government to bring normalcy in Kashmir Valley,” Singh said, urging residents to refrain from violence.

Also Read | A father had forecast: A militant does not live more than 7 years, Burhan lived 6

The government also said that the Amarnath Yatra, which has been suspended, will resume shorty as and when security agencies believe it is safe.

04. 25 pm: “The cabinet appealed to all political forces who have expressed concern for people’s lives…We appeal to them that if they want peace in the state and steps taken by government for saving lives of people succeed, we need their support also,” Education Minister Naeem Akhtar.

03.50 pm: “The yatra is suspended for the second consecutive day today from Jammu. No fresh batch of pilgrims has been sent from Jammu,” Deputy Commissioner Jammu, Simrandeep Singh, said. He, however, said the yatra from the base camps in Kashmir is on. Mobile and Internet services also remained suspended in Jammu as a precautionary measure.

2.10 pm: Meanwhile, Pakistan has reacted to the developments in Jammu and Kashmir. “‘Extrajudicial killing’ of Kashmiri leader Burhan Wani and scores of other innocent Kashmiris is deplorable and condemnable,” Pak MoFA has said. “Pakistan reiterates that resolution of J&K dispute is only possible by realisation of right to self determination of J&K people.”

1.30 pm: Our aim is not to kill any militant, we want them to surrender or we make an arrest. We appeal public to control the youngsters. We must take J&K towards development. Damal Hanji Pura police Station was looted, some people fired upon us from those weapons. Our personnel got injured. One is still missing: ADG (CID) SM Sahai told ANI this afternoon.

1.17 pm: According to ANI, which has quoted MHA sources, Home Minister Rajnath Singh has asked the Jammu and Kashmir state government to ensure the safety of Kashmiri pandits in the state.

1.13 pm: PTI reports that the Amarnath Yatra has resumed

1.10 pm: “I reassure members of minority Kashmiri Pandit community that they are safe. There was some incident of stone pelting on the first day,” MoS PMO Jitendra Singh said.

12. 55 pm: Home Minister Rajnath Singh speaks to Jammu and Kashmir CM Mehbooba Mufti, assures her of all Central assistance to deal with the situation.

Also Read | The worry: What Burhan Wani’s death could give life to

12.40 pm: “He is a Hizbul Mujahideen commander (Burhan Wani), how can any Indian have sympathy for such people? Centre and state together will tackle situation. The situation (in J&K) will be brought to normalcy at the earliest. Some people who are inspired by some of our neighbour is trying to create such disturbances,” Union Minister Venkaiah Naidu added.

12.35 pm: “Kashmir is an integral part of India, there is no question of any negotiation and discussion on that,” Union Minister Venkaiah Naidu said.

Normal life across the Valley remained paralysed due to a strike called by separatist groups to protest the killings.

Separatist leaders, including Syed Ali Shah Geelani and Mirwaiz Umar Farooq, continue to be under house arrest while Mohammad Yasin Malik is also under preventive detention.

Wani, a Hizbul Mujahideen commander, and two others were killed on Friday when security forces retaliated after being fired upon by the trio from a house in which they were hiding.

Mobile internet services were suspended and a curfew was imposed across the Valley to contain the fallout of Wani’s killing.