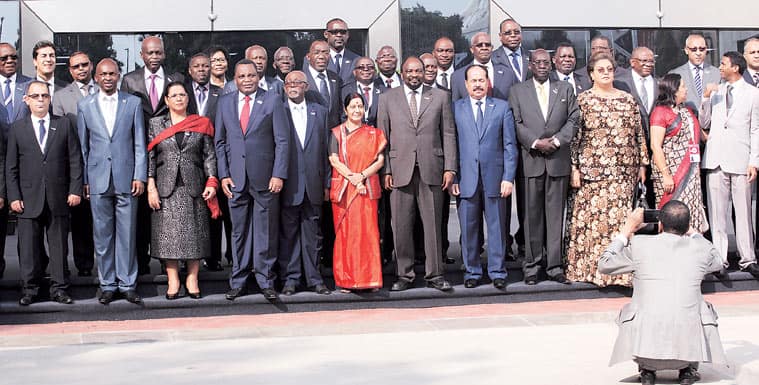 As Prime Minister Narendra Modi is scheduled to hold 20 bilateral meetings on Wednesday with presidents and prime ministers of African countries, an unequivocal support for India’s candidature for a permanent seat at the United Nations Security Council (UNSC) is unlikely to emerge during the third India-Africa summit.

However, sources said there will be a statement — in the political document — in which India and Africa express commitment to multi-lateralism and strengthening of the democratic structure of the United Nations to increase participation of developing counties in the decision-making processes.

According to officials involved in the negotiations, the draft of the political document has a formulation which says “Africa takes note of India’s position and its aspirations to become a permanent member with full rights in an expanded UN Security Council”.

“But, we are working towards improving the language… negotiations are underway,” an official told The Indian Express.

New Delhi is looking at putting a timeline for the UN reforms. Much will depend on Modi’s 20 bilateral meetings with heads of states and governments from Africa Wednesday, a day ahead of the Third India-Africa Forum Summit (IAFS) on Thursday.

On Tuesday, External Affairs Minister Sushma Swaraj held a host of bilateral meetings with her counterparts from Africa where she pitched for permanent seat to India in the UNSC. “Although Indians and Africans comprise nearly 2.5 billion people, our nations continue to be excluded from appropriate representation in the institutions of global governance. India and Africa can no longer be excluded from their rightful place of the permanent membership of the UN Security Council,” she said at the ministerial meeting of the Third India-Africa Summit.

Noting that democratic reforms are essential in global institutions, Swaraj said the 70th session of the UN General Assembly is an opportune moment to achieve concrete results to resolve these issues.

“Unless we put in place more democratic global governance structures, the more equitable and just international security and development frameworks that are essential for collective peace and prosperity of this planet, will continue to elude us. There can no longer be pockets of prosperity in vast areas of underdevelopment and insecurity,” she said.

Hans Raj Bhardwaj : Is there any doubt that politicians want to control judiciary?