Taratombi Devi addressed her letter to the Superintendent of Police, CBI, Imphal Branch in Lamphelpat. 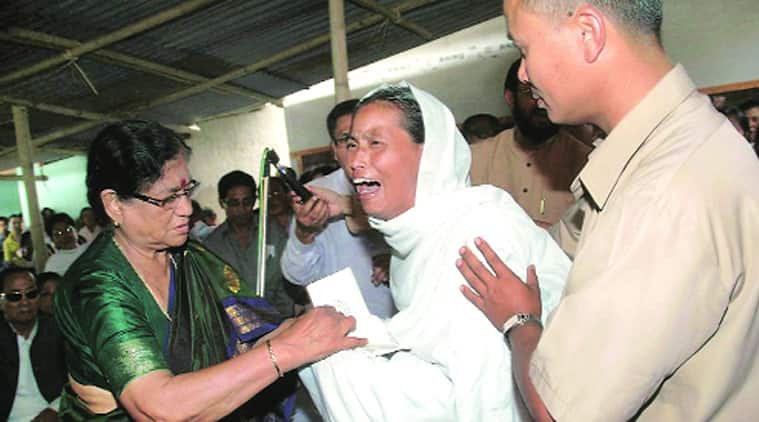 Two days after the Centre sought a report from the Manipur government on a report in The Indian Express in which a Manipur Police head constable, being tried for his role in an alleged fake encounter in Imphal in July 2009, admitted he shot an “unarmed” Chungkham Sanjit Meitei, the 22-year-old’s mother Chungkham Taratombi Devi wrote Friday to the CBI requesting it to reopen the case and investigate the “fresh disclosure’’.

Taratombi Devi addressed her letter to the Superintendent of Police, CBI, Imphal Branch in Lamphelpat.

The CBI submitted its chargesheet in the case in September 2010 and the trial is underway in the court of the special judge, Imphal West. So far, 79 prosecution witnesses have been examined in the case.

Manipur policeman Thounaojam Herojit Singh, a gallantry award recipient, had told The Indian Express he shot the “unarmed” Sanjit Meitei, a suspected member of the underground PLA, on July 23, 2009.

“Yes, I shot him. I shot Sanjit Meitei. No, he was not armed. I felt no remorse, no sympathy after I killed Sanjit. I felt nothing. It was an order and I had to simply carry it out,” he said.

Herojit Singh alleged he was told by then Additional SP, Imphal West, Dr Akoijam Jhalajit Singh — he is now SP of the same district — to “finish him off”.

In a statement Wednesday, Jhalajit Singh denied the allegations levelled against him by Herojit Singh. He said “the case was investigated thoroughly by the premier investigation agency CBI and trial of the case is now going on in the Hon’ble Court of the Sessions Judge, Imphal West”. He said “the matter being sub-judice” he would “not make further statement”.

In her letter to the CBI, Sanjit’s mother Taratombi Devi said: “Thounaojam Herojit Singh, who is listed as accused number 3 in the chargesheet, has made an extra legal confession stating inter alia that he killed Chungkham Sanjit Meitei on 23rd July 2009 as ordered by his superior, Dr Akoijam Jhalajit Singh, the then additional superintendent of police, Imphal. That from the disclosure made by Herojit Singh, it transpires that he killed my son Sanjit Meitei as ordered to do so.”

“Under the circumstances, a fresh investigation into the new disclosure is highly required in order to put an end to the impunity enjoyed by superior officers and politicians who give illegal orders for murder. Individual criminal responsibility should be assigned to not only the hand that pulled the trigger but also to those who gave the order for the killing,’’ she stated in her letter.

Once Upon a Time in Mumbai