On Tuesday, the DHS also questioned the state-appointed officer from Thane who was part of the local authorisation committee that approved all kidney transplants at the hospital. 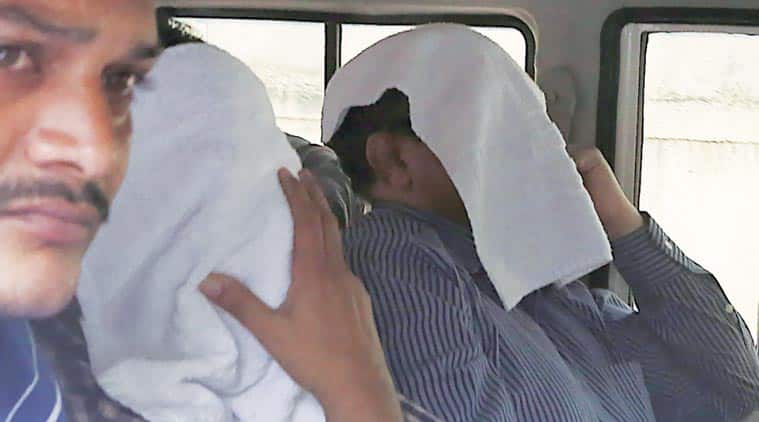 The kidney racket accused being taken to Andheri court on Wednesday. (Express Photo by Amit Chakravarty)

A three-member committee of the Directorate of Health Services (DHS) found the L H Hiranandani Hospital’s local authorisation committee for live organ transplantation unable to explain why they conducted a poor-quality video interview of the donor, recipient and witness in the illegal kidney donation case at the hospital last month.

In the video lasting less than 15 minutes, recipient Brijkishore Jaiswal was asked his address. He replied, “Malabar Hills, Napean Sea Road.” When donor Shobha Thakur, who is accused of posing as Jaiswal’s wife, was separately asked the same question, she replied, “Malhar Hills”. Committee members then asked her to answer properly and she replied that she belongs to a village.

According to the report, nephrologist Shete was directly involved in the racket and both urologists — Shah and Shetty —were part of it or at least supported the illegal transplants. It says the hospital CEO and the medical director were negligent in not curbing the illegal activity.

The report points to carelessness while viewing identification documents submitted by donor and recipient. Of the usually 16 documents involved, there were only 11 identification documents submitted, all of which were forged. The address of Shobha Thakur was shown as Dharavi before marriage, which changed to Malabar Hills after marriage. The inspecting committee found this suspicious too.

The report submitted by the DHS committee, central to the arrests of five doctors from the suburban hospital, has blamed the hospital’s head as well as other doctors for negligence. In its probe, for which more than 15 hospital staffers were questioned, the DHS team found the hospital was not aware of all the rules under Transplantation of Human Organs Act, 1994. “The video interview to confirm donor-recipient relationship was not conducted properly. Such interviews should be longer, at least of half an hour,” said a senior DHS official.

The hospital ranks second in the number of transplants in the state after Hinduja Hospital.

According to the DHS report, negligence was also noted on the part of Dr Mukesh Shah and Dr Prakash Shetty, and Dr Mukesh Shete who were heading the transplant surgery for Jaiswal and Thakur.

It has also blamed transplant coordinator Nilesh Kamble for preparing documents and approving them even though his role only involved coordination between patients and doctors. “As per the Act, the coordinator is not supposed to clear documents. It is the doctors’ responsibility,” said a committee member.

“It is the hospital’s fault if they are not scrutinising the documents. The hospital CEO must ensure forged documents are not approved,” said Dr Mohan Jadhav, state director of health services.

On Tuesday, the DHS also questioned the state-appointed officer from Thane who was part of the local authorisation committee that approved all kidney transplants at the hospital.

The doctor has, however, not been charged for negligence as opposed to the five other members representing the hospital’s local authorisation committee.

Shetty is a urologist with 18 years of experience. He has been attached with Hiranandani hospital since 2006 as a consultant urologist. While his specialisation is prostrate trans-urethral prostrate and laser prostrate surgery, Shetty also conducts kidney transplants and uro-oncology at the hospital. He completed his MBBS from Mangalore University and later pursued a post-graduate specialisation in urology from PD Hinduja Hospital. In the case of Brijkishore Jaiswal, he was part of the team that was to conduct the transplant.

Shah is a urologist practising for 24 years and is a member of the Mumbai Urology Society. At Hiranandani, he is a transplant consultant. He is also attached with 11 other hospitals. His specialisation is in minimal invasive surgeries and he has conducted over 2,000 kidney transplants. Shah also owns Pooja Nursing Home in Jogeshwari. On Wednesday, three patients remained admitted at his 15-bedded hospital. Shah was known to accompany Dr Mukesh Shete in several of his kidney transplants.

Shete has an experience of 15 years in nephrology. He is also a transplant physician with Apex Kidney Care center in Mulund. He also conducts dialysis and treats patients of hypertension. Shete who declared Brijkishore Jaiswal’s as a chronic kidney failure case and recommended a kidney transplant. He, however, has told The Indian Express, “The patient came to me with his wife for treatment. We first put him on dialysis and then scheduled the transplant. I do not know they had produced forged documents.”