Hindu Sena chief Vishnu Gupta was arrested on Friday by Delhi Police in connection with the vandalism of Pakistan International Airlines office here by the members of the outfit. 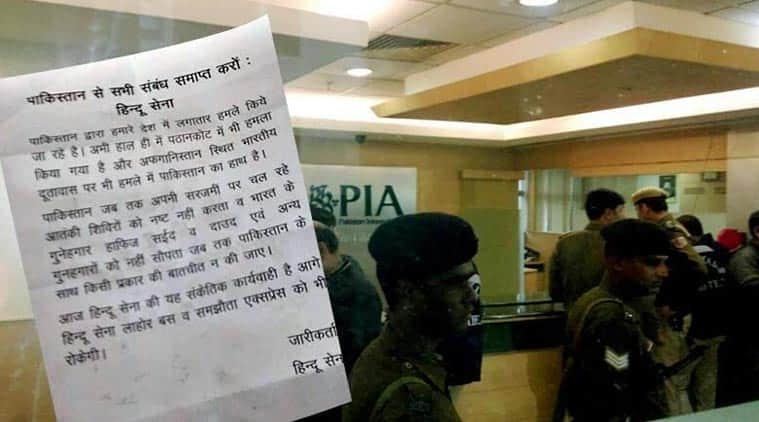 “The police are still looking for the other Hindu Sena members who were involved in the vandalism,” DCP (New Delhi) Jatin Narwal said.

A day after Hindu Sena members vandalised the office of the Pakistan International Airlines (PIA), the Delhi Police arrested the outfit’s chief Vishnu Gupta for allegedly planning the attack.

“Gupta was arrested Friday afternoon after he was questioned at the Barakhamba police station. He has been booked under charges of criminal conspiracy,” said Deputy Commissioner of Police (New Delhi) Jatin Narwal.

On Thursday, five members of the Hindu Sena had ransacked the PIA office in Barakhamba Road at 3.15 pm. They had damaged computers and furniture.

A case under sections 120B (being party to a criminal conspiracy), 147 (rioting), 149 (being the member of unlawful assembly, guilty of offence committed in prosecution of common object), 427 (mischief causing damage to property) and 452 (house-trespass after preparation for hurt, assault or wrongful restraint) of the IPC has been registered.

Gupta had been arrested last October as well, after his complaint about beef being served at the Kerala House canteen was found to be false.

Police had arrested one member of the group, identified as Lalit Singh Thursday while four others managed to escape.

The Ministry of External Affairs has asked police to strengthen security around the PIA office.