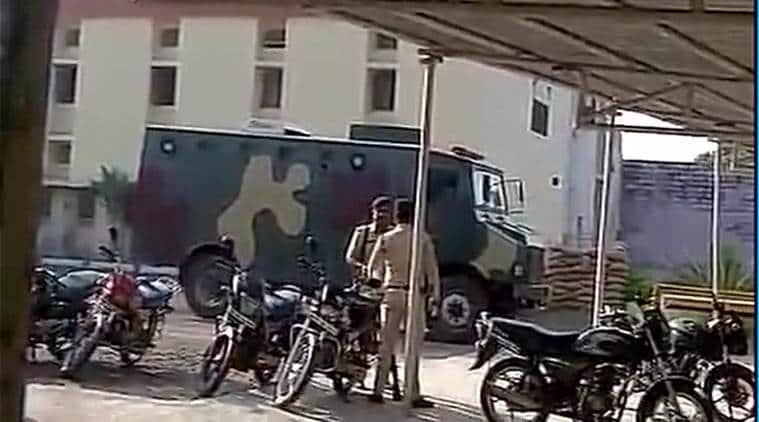 A high alert has been sounded today following a jail break by eight SIMI activists in Bhopal, even as the Union Home Ministry sought a report from the Madhya Pradesh government. This was the second major jail break by operatives of banned SIMI in three years after the sensational escape by seven members of the group from a jail in Khandwa in Madhya Pradesh in 2013. Concerned over the last night’s incident, a nationwide alert has been sounded for the hunt of the eight SIMI men, who escaped from Bhopal jail after killing a jail security guard, official sources said.

All states neighbouring Madhya Pradesh have been specifically told to remain alert and keep special vigil along their borders with Madhya Pradesh, sources said. Central security officials were in regular touch with the state police officials and providing inputs to help nab the escapes. The Home Ministry also asked the Madhya Pradesh government to send a detailed report about the jail break, whether there was any lapse on the part of the jail administration and the steps taken to check such incidents.

The central security agencies were particularly anxious as four of the seven SIMI activities, who escaped from a jail in Khandwa October 1, 2013, could be arrested only after three years and during the period of their hiding, the militants were involved in multiple incidents of terror and a bank robbery.

The seven SIMI men had made an audacious escape from the district jail in Khandwa in Madhya Pradesh after scaling a 14-foot wall. While one prisoner surrendered the next day and another was caught in December 2013 from Barwani in Madhya Pradesh. A third was killed in an encounter with Telangana Police on April 5, 2015 but the four continued to evade police for three years till their arrest in February 2016 in Rourkela in Odisha.

While in hiding, the SIMI men were allegedly involved in terror activities in several states including Madhya Pradesh, Andhra Pradesh, Telangana, Karnataka, Tamil Nadu, Maharashtra, Uttarakhand and Uttar Pradesh. The group is suspected to be involved in a bank robbery in Karimnagar (Telangana) on February 1, 2014, blast in a Bangalore-Guwahati train at the Chennai Central station that killed a young software engineer, on May 1, 2014 and the July 10, 2014 explosion near Faraskhana and Vishrambag police stations in Pune. They were also allegedly involved in explosions in Roorkee in Uttarakhand and in Bijnor in Uttar Pradesh.

Samsung Gear Fit 2 review: For those who like to mix up their fitness routines