In the video, three persons are seen thrashing the youth — identified as Waseem, 20, a resident of Pachgaon in Mewat district of Haryana — near what appears to be a highway. 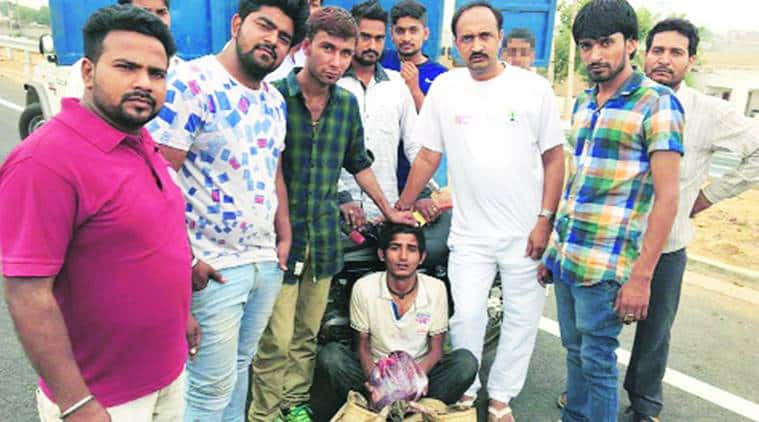 The attackers and some others clicked photos with Waseem

IN ANOTHER attack by gau rakshaks, a Muslim youth was beaten up by three persons in Sohna, Haryana, for allegedly trying to smuggle beef in Mewat. While the incident occurred on May 6, a purported video of the attack started doing the rounds Friday. In the video, three persons are seen thrashing the youth — identified as Waseem, 20, a resident of Pachgaon in Mewat district of Haryana — near what appears to be a highway. A fourth person, videographing the incident, can be heard telling them not to hit the youth on the face.

“Will you kill my mother (cow)?” asks one of the attackers, as he kicks the victim. As the youth pleads for mercy, another attacker points a gun at him. The camera then pans to a motorcycle nearby, which has bags of red meat. The attackers tell the youth to confess that he is carrying beef. The men, along with some other activists, also clicked photographs with Waseem, which some of them uploaded on their Facebook pages the same day.

“This is the third success for Gau Raksha Dal,” posted Monu, 24, one of the four attackers and a Bajrang Dal coordinator from Manesar, on his Facebook page. He uploaded photographs of the “cow meat” that was seized, the “stolen” motorcycle, and the group of gau rakshaks surrounding Waseem. He claimed the Sohna police and Gau Raksha Dal had cornered the “cow meat smuggler”, but Waseem had shot in their direction and escaped. “Subsequently, the Gau Raksha Dal nabbed him… We recovered 33 kg of meat from him,” he claimed on Facebook.

“We are Hindus and the cow is our mother. If the world says we are goons, let it be. We just want to protect our mother,” Monu told The Sunday Express. The person who shot the video has been identified as Raju Singh, a resident of Buhana in Jhunjhunu. According to his Facebook page, he is a member of the Bharatiya Janata Yuva Morcha, Baba Umand Singh Gau Raksha Dal and Akhil Bhartiya Hindu Kranti Dal among others.

Click here to watch the video: The video contains scenes of violence and use of abusive language, viewers discretion is advised

The other two attackers are yet to be identified. The Sohna police station confirmed that an FIR was lodged against Waseem on May 6. He was charged under Haryana Gauvansh Sanrakshan, Gau Samvardhan Act, 2015. When contacted, SHO Kuldeep Singh said he had joined after May 6 and was not aware about the incident.

Both Raju and Monu have posted photos with BJP MP Anurag Thakur on their Facebook pages. Monu also has photographs with BJP chief Amit Shah, Union Minister Prakash Javadekar and Haryana Minister Ram Bilas Sharma. Both also have photographs with Haryana IPS officer Bharti Arora. When contacted, Arora said, “No gau rakshak should take law into their hands… They may have the right intentions, but they get overexcited.” Rajasthan Minister Rajendra Rathore also said “vigilantes should not take law into their hands.”