As the security forces closed in, the Hizbul Mujahideen militants opened fire and in the ensuing gunbattle, two militants were gunned down. 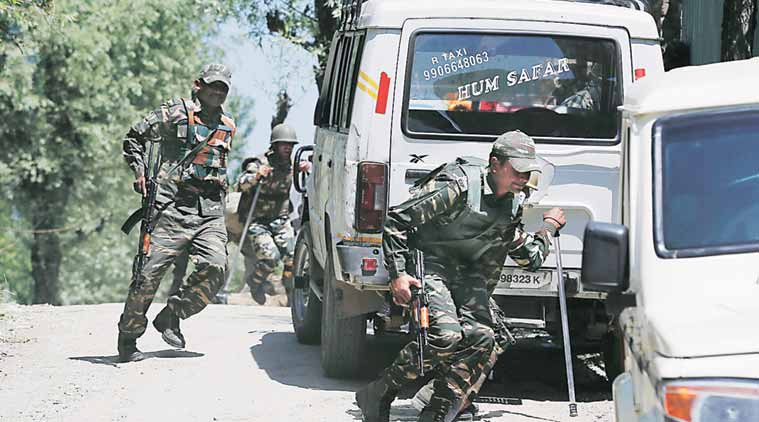 Three militants and an Army officer were killed in encounters at separate locations in North Kashmir Friday, the Army said.

Defence spokesperson Lt Col N N Joshi said that based on information about the presence of militants in Kunchpura village near Tangmarg, the Army and the Special Operation Group of state police launched a joint operation on Friday morning.

As the security forces closed in, the Hizbul Mujahideen militants opened fire and in the ensuing gunbattle, two militants were gunned down, he said.

Joshi said the militants, who were allegedly involved in many acts of militancy, had refused to surrender despite several appeals.

“An AK-47 rifle and a pistol with ammunition was recovered from the encounter site.”

The slain militants have been identified as Mehrajudin Bhat of Pattan, who was active in the Kunzar area of Baramulla. Bhat, who held BSc and BEd degrees, had joined Hizbul Mujahideen two years ago.

The other slain militant has been identified as Adil Ahmad Mir of Barat Sopore.

Another militant was gunned down near the LoC in Nowgam sector, where three militants were killed Thursday, said the Army.

“Troops deployed in the forward area of Nowgam sector observed the movement of a group of militants on the early morning of May 26,”said the Army spokesperson.

“The counter infiltration grid was reinforced while the militants were kept under constant surveillance till they could be effectively engaged,” he added.

“A Non-Commissioned Officer of Rashtriya Rifles, Hangpan Dada, who led his team and brought effective fire on the militants got profusely injured… After ensuring elimination of three militants, while being evacuated to base hospital, he succumbed to his injuries,” he said.

The militants’ identity was yet to be ascertained, he added.

Monaco has Formula 1 dancing in the streets