In the compound of a bungalow opposite the one that belonged to Ahsan Jafri, the ex-Congress MP who was among the 69 killed in 2002, is an open sump with clear water and an empty plastic paint can on the side. Zakia Jafri, whose husband Ahsan Jafri was among those killed, watches the verdict at her home in Surat. (Express Photo: Hanif Malek)

“NO outsider is allowed inside the society compound or allowed to encroach on its premises. Don’t litter here. Whoever commits such offence will face action — By Order,” states a “public warning” in black ink on the outer wall near the entry gate to Gulberg Society.

But inside, the story of the arson and murder of 14 years ago is evident in the homes with walls blackened by soot and littered with plastic bottles, rags, human waste, damaged compact discs, remains of a SIM card, utensils, books, a rundown handcart, dried leaves and broken soft toys.

In the compound of a bungalow opposite the one that belonged to Ahsan Jafri, the ex-Congress MP who was among the 69 killed in 2002, is an open sump with clear water and an empty plastic paint can on the side. Bundles of fresh sugarcane inside a room of another bungalow are the only other signs of life in the ruins of Gulberg Society, which does not even have a signboard anymore.

On the white lime plastered under a stairway is an artwork by a child in charcoal, of a peacock sketch, followed by “Ya Allah” written in Arabic and some faded words scribbled in Gujarati, of which only “Kasim” is legible.

Venture into one of the abandoned homes and you hear the growl of a stray dog resting on what was once a kitchen table. A white A4 sheet pasted outside the rusted iron gate states: “Gulberg Society Bungalow no 15”.

Jafri’s two-storeyed home, which was bungalow No 19, is covered with dense vegetation, the dried bougainvillea clinging to the grill on the first floor.

“This was my house, bungalow number 18, right beside Jafri’s house. I am coming here after a year. The last time I visited was on February 28, 2015, when families came together to light candles and pray for the lost souls. In a joint family of 22 members, I lost ten,” said Feroz Khan Pathan, one of the victims who has settled in the Vejalpur area near Juhapura. 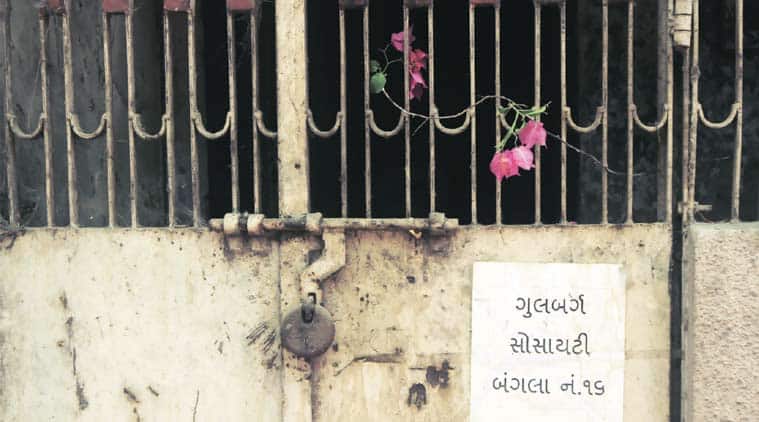 Under the burning sun outside, policemen are positioned with water cans in the house at the entrance overlooking the main road outside the boundary wall, which is intact. The only structure with a fresh coat of white paint, is a mosque opposite, where Muslim businessmen in the neighbourhood still pray.

“He was a gentleman,” said Bhavalal Jain, a money-lender who runs a mobile store outside the society, when asked about Jafri.

Doing business here for 30 years, he recalls how as chairman of the society, Jafri had facilitated the construction of a dozen shops outside the residential area. “We pay Rs 100 per month as rent, and Jafri had paid a deposit for the building of the shop,” said Jain.

“I am running this shop for last 30 years though it is still on rent,” said Gopalbhai Brahmanya, who runs Krishna Electronics. He said on the day of the massacre he had “closed his shop and gone home”, so he knew nothing.

Santoshbhai, a cobbler on the opposite side, said, “I am running this shop for last 17-18 years. Except one man, I haven’t seen anybody visiting this place.”

Prakashbhai Patni, who owns New Payal electronics, said, “We do not know when we will see people visiting this place next.”

Said one of the policemen standing guard at the society gate since 8 am Thursday: “We do not know till when we will be deployed here. It depends upon the orders.”