The car, registered in Diu and Daman, is owned by one Nrupal Patel, who is now settled in London. 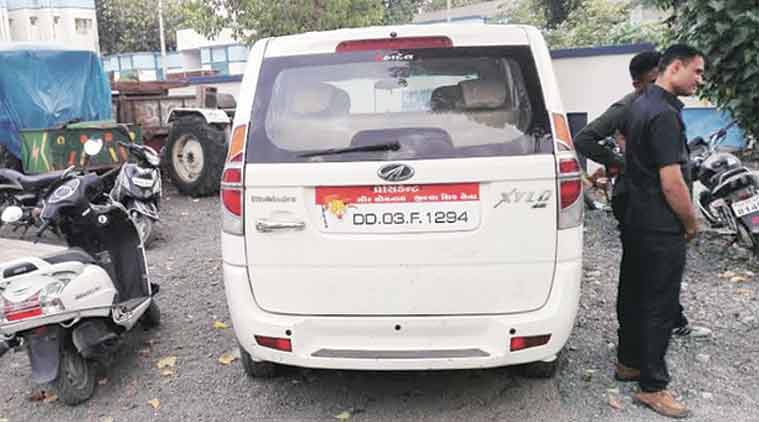 The car used to bring the four Dalits to Una town. (File)

A senior CID official leading the investigation into the Una flogging incident Sunday said that Pramodgiri Goswami, who claims to be Shiv Sena’s district unit chief, was the key conspirator behind the attack on seven Dalits by “gau rakshaks” for allegedly killing a cow.

“Evidence gathered, so far, suggested that Promodgiri was key conspirator of the attack. He was leading the mob that assaulted the Dalits at Mota Samadhiyala village (in Una taluka of Gir Somnath district),” said DSP Keshavji Saradava.

Pramodgiri (26) was arrested a day after the assault on the seven Dalits on July 11. Police had also seized a Xylo car, which was allegedly used for abducting four of the victims from Mota Samadhiyala and to bring them to Una, around 30 km away. The four were tied to the same SUV, and flogged publicly in Una.

The car, registered in Diu and Daman, is owned by one Nrupal Patel, who is now settled in London. “Pramodgiri has purchased this car from Patel. But it has not been transferred in his name as the owner was yet to clear dues of his car loan,” said Saradava.

After attacking the Dalits, Pramodgiri had claimed responsibility of the attack in front of the media. “We had got a tip-off that four to five persons were slaughtering a cow at Mota Samadhiyala village and transporting beef,” he had told media.

However, who informed Pramodgiri and his group about the alleged cow slaughter remains a matter of investigation. Investigations by The Indian Express have revealed that Una police had received an input from state police control room about beef being allegedly transported to Una.

Police, so far, have made 26 arrests. At present, Pramodgiri is in judicial custody.