As Patidars clash with police — arrests, curfew, curbs on Internet

Police claimed they resorted to lathicharge only after some persons started throwing stones at the police vehicles, Lalji Patel alleged that Patel agitators were targeted without any provocation. Police crack down on protesters in Mehsana on Sunday. (PTI Photo)

Curfew was imposed in Mehsana town of Gujarat and mobile Internet services suspended in Ahmedabad, Mehsana, Surat and Rajkot, after a call to court arrest given by Patidar leaders turned violent.

The Jail Bharo Andolan call was given by the Sardar Patel Group (SPG) led by Lalji Patel, seeking reservation for the community and immediate release of their jailed leaders, including Hardik Patel. Another prominent group fighting for reservations for Patidars, the Patidar Anamat Andolan Samiti (PAAS), had supported it.

Union Home Minister Rajnath Singh called up Chief Minister Anandiben Patel to take stock of the situation. Sources said she told him about the steps being taken by the government to maintain peace.

The state government has decided to deploy four companies of the Rapid Action Force across the affected cities, and request the Centre for 10 companies of CRPF to deal with any untoward situation.

The Mehsana district authorities had refused permission for the SPG protest. However, the SPG defied the order and gathered for a massive rally, where Lalji Patel addressed them. While they were moving across town to court arrest, the SPG supporters and police clashed with each other.

Mehsana Collector Lochan Sehra said, “These people did not have mandatory permission, still they did a ‘sabha’. Then they moved towards Modhera Chowkdi and started pelting stones at police without any provocation and attacked government vehicles. An executive magistrate sustained a fracture on one of his arms in the violence. After this, the mob started attacking government buildings. So police had to resort to lathicharge and tear gas shells.”

Five policemen and two officials sustained injuries in the incidents, police said, while the agitators claimed 25 of their supporters were injured in police action. Laji Patel was among those assaulted, receiving head injuries. Sehra claimed he was hit in the stone-pelting. 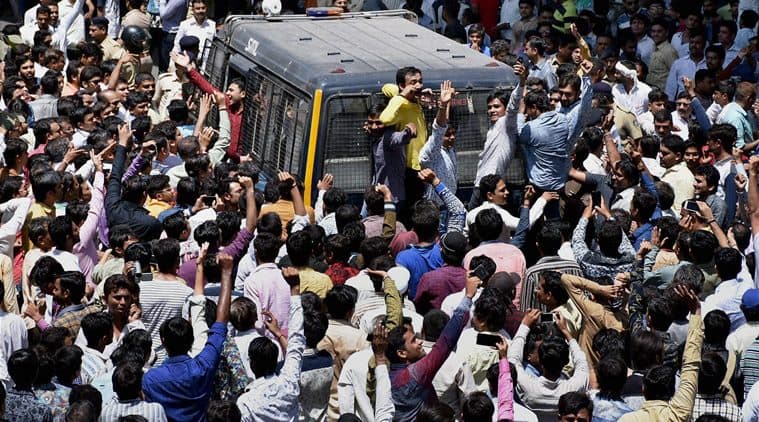 Several people were arrested in connection with the attacks on government property.

Lalji Patel claimed the SPG men were targeted without any provocation. Talking to PTI, he said, “Our protest was peaceful, as announced earlier. However, police suddenly hit me and some of our members when we were walking ahead of our procession. I was hit on the head.”

The collector said mobile Internet had been banned and curfew imposed for the next 24 hours to control the situation.

Soon after news of Mehsana violence spread, at Surat, a Patidar mob clashed with police in the Varachha area. Police used lathicharge and tear gas to control the mob, before detaining more than 400 protesters.

Later, mobile Internet was banned for 24 hours in the city.

Ahmedabad Collector Rajkumar Beniwal and Rajkot authorities decided to extend the ban to the two cities due to “tension prevailing in the state”. “The mobile Internet ban will start from Sunday evening at 6 and continue till 11 am on Monday. Depending upon the situation, the order will be reviewed,” Beniwal said.

Landline broadband Internet services will not be affected by the ban.

The Patidar groups, including SPG and PAAS, have given a call for Gujarat bandh on Monday.

The clashes happened just a day before a high-level committee of seven state ministers was to meet the Patidar leaders mediating peace talks between the agitating community and the state government.

Asked about the agitation, the Chief Minister was brief and dismissive. “Which agitation? Such agitations keep going on. Our job is only to serve,” she told reporters in Valsad.