The websites that received advertisements — worth amounts ranging from Rs 10,000 to Rs 21.7 lakh — have been identified in a list prepared by the government for 2012-15 in response to a question in the state Assembly by Congress MLA Bala Bachchan. 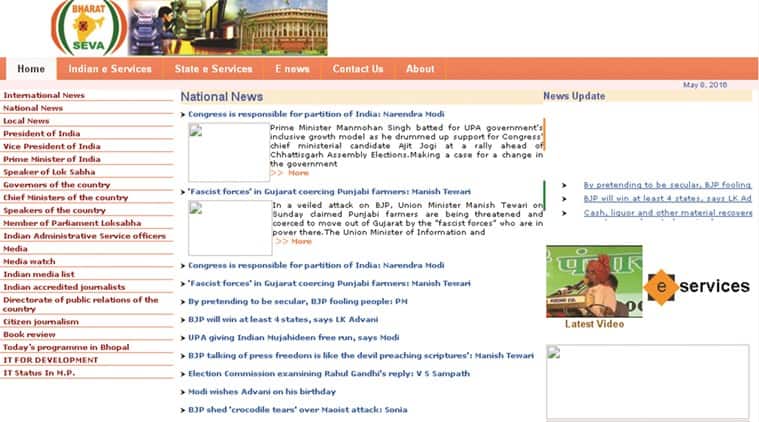 The home page of http://www.bharateseva.com, a recipient of MP government advertising, was referring to “Prime Minister Manmohan Singh” on Sunday evening, even though the date on the page said “May 8, 2016”

THE MADHYA Pradesh government handed out at least Rs 14 crore in the form of advertisements over four years to 234 websites, many of them run by relatives of journalists based in the state, an investigation by The Indian Express has found.

The websites that received advertisements — worth amounts ranging from Rs 10,000 to Rs 21.7 lakh — have been identified in a list prepared by the government for 2012-15 in response to a question in the state Assembly by Congress MLA Bala Bachchan.

Apart from links to journalists working for various publications, this is what The Indian Express has found:

# At least 26 websites got advertisements worth Rs 10 lakh or more, of which at least 18 are run by journalists or relatives of journalists.

# At least 81 websites, many of them run by relatives of journalists, got advertisements worth Rs 5-10 lakh.

# At least 33 of these websites are being run from government-allotted accommodation in Bhopal.

Rakesh Agnihotri, a journalist working with the local news channel Swaraj Express, confirmed that “Prakhar and Rajesh are related to me”.

# A majority of the web sites have not provided basic contact details under the heads ‘About Us’ or ‘Contact Us’.

When contacted, Anupam Rajan, commissioner for public relations, Madhya Pradesh, said, “Web sites are the new news media. Money was given to popularise this new medium, no matter who runs those sites. We have now revised the policy of giving advertisements to web sites. Before giving any money, we check whether they are actually working or not. Besides, we give advertisements now only after getting reports of the number of hits on the site. We cannot do anything if any of these web sites shut down after getting advertisements.” Said MLA Bala Bachchan, “Advertisements should go to actual news portals run by genuine journalists. Why are advertisements being given to web sites of people associated with the BJP and some journalists? In such a situation, mediapersons cannot do their work independently.”

One website — http://www.mpnewsonline.com — is run by a school teacher Mini Sharma, who is the wife of Gireesh Sharma, resident editor in Bhopal of The Pioneer. The web site, which contains no contact details, got Rs 17 lakh from the government in the form of advertisements from 2012 to 2015. Defending his wife’s association with the web site, Sharma said, “It may be unethical but there is nothing illegal in it.”

However, the web site that got the maximum of Rs 21.70 lakh in advertisements from the state is listed under the name of Ashwini Rai, who said he works with the BJP. “I am not associated with the web site. I work for the BJP. Somebody else runs the web site,” Rai said.

When contacted by The Indian Express, this is what some of the journalists linked to these web sites had to say:

#  “My wife has every right to run a web site. This is not such a big issue,” said Nitendra Sharma, editor of the English daily Free Press, whose wife Suman Sharma runs http://www.burningnews.org, which got advertisements worth Rs 20.70 lakh.

#  “My wife is dedicated to this web site,” said Anurag Upadhyay, a former journalist with India TV, whose wife Shruti Anurag Upadhyay runs http://www.dakhal.net, which got Rs 19.7 lakh in this period. Posts on the site have no dateline.

# “My web site is not getting advertisements now,” said Rajesh Pandeya, who works for Hindi daily Dainik Bhaskar and runs http://www.khabarmail.com (Rs 8.5 lakh).

#  “Sarita runs the web site. We are not getting money from the government now,” said Ravindra Kailasia, a journalist with Hindi daily Nav Dunia, whose wife Sarita runs http://www.khabarsabki.com (Rs 8.5 lakh).

# “I did not ask the government for any money but accepted whatever they gave. We did nothing wrong,” said Raghvendra Singh, who works for Hindi daily Naya India, and whose wife Sadhna Singh runs http://www.bawandar.com (Rs 8.25 lakh). The web site is not accessible.

# “It doesn’t matter where I work. See the web site, it is good,” said Atmaram Sharma, an employee of Madhyam, a state government organisation, and whose wife Sushma Sharma runs http://www.garbhanal.com (Rs 7.20 lakh), an e-magazine of a publication of the same name.