Invitations have gone out to families of more than two lakh girls for events in schools in their respective villages. They are in the name of the girl child. 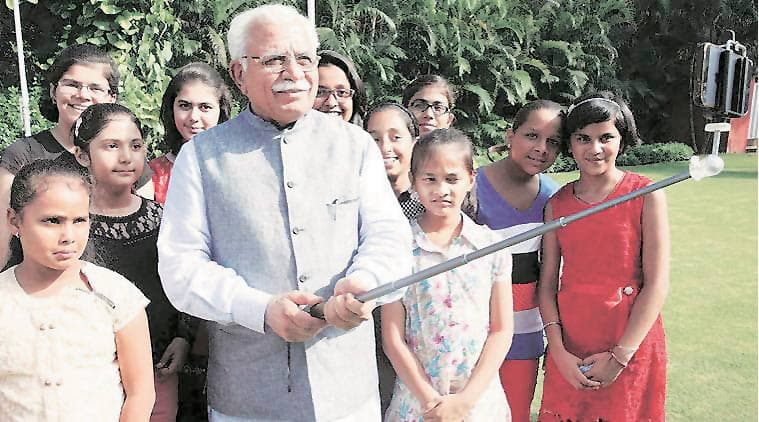 Haryana CM M L Khattar taking a selfie with girls, in a file photo. The R-day move is part of several initiatives taken in the state with the country’s worst sex ratio. File photo

Republic Day celebrations this year will be different for families with infant girls across Haryana. As part of initiatives to encourage the girl child in a state with the lowest sex ratio in the country, the Haryana Education Department has sent invitations to such families for Republic Day events in their localities, where they will be seated in front rows.

Invitations have gone out to families of more than two lakh girls for events in schools in their respective villages. They are in the name of the girl child.

The flag-hoisting at the Republic Day events would also be done by a village’s most educated girl. The girl would then remain a member of the school management committee for one year.

The local schools helped identify the families with the infant girls, looking at children born between January and December last year, and sent out the invitations.

An official of the Education Department said the aim was to give the girls a place of pride in the family. “We wanted to make the parents feel that it was because of their daughters that they were receiving respect. We want the perception about the girl child to change.”
Sex ratio at birth in the state in 2015 was 876. A total of Haryana’s 12 districts are among the 100 worst selected under the Beti Bachao Beti Padhao programme.

The Haryana government has over the past few months increased enforcement of the Pre-Conception and Pre-Natal Diagnostics Technique (Prohibition of Sex Selection) Act. A total of 58 FIRs have been registered under the PC&PNDT Act and 72 FIRs under the Medical Termination of Pregnancy Act.