Mumbai, Bengaluru and Delhi-National Capital Region continue to attract the highest investments in India and account for about 75% of these. For the calendar 2015, the fund-raising stood at $61 billion in the first six months which accounted for more than half of what was raised in the previous year.

Even as traditional sources of funding for the real estate sector have declined on account of weakening balance sheets of real estate companies across the country, the private equity investments have witnessed a jump. 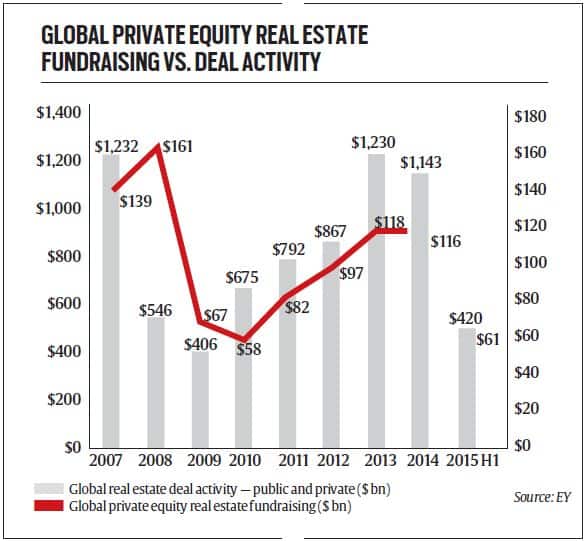 This seems to be in line with the global trend. According to data from EY, global private equity real estate fund-raising rose from $97 billion in 2012 to $116 billion in 2014. For the calendar 2015, the fund-raising stood at $61 billion in the first six months which accounted for more than half of what was raised in the previous year.

The structured debt deals, i.e. investments that are primarily debt transactions organised in a manner that offers assured returns to the investor, accounted for almost half (49 per cent in value terms) of the total PE investments in 2015.

These structured debt deals are an attractive investment option for investors as its fully secured and guarantees returns on pre-decided terms. The structured deals strategy, though moderated due to increased competition, offers returns in the range of 15 per cent–17 per cent to its investors. 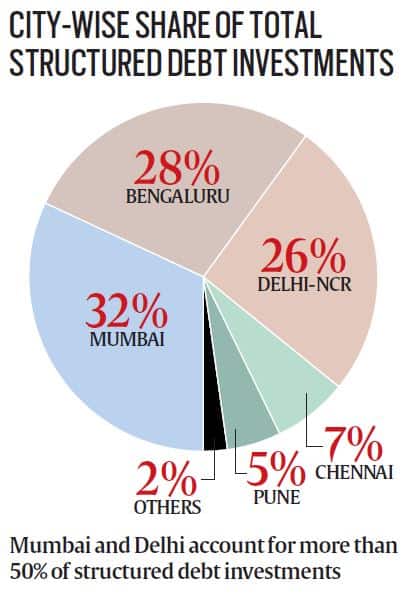 Mumbai, Bengaluru and Delhi-NCR continue to attract the highest investments in India and account for about 75 per cent of these investments.

However, the Cushman & Wakefield report claimed that with government initiatives to de-stress these cities, relaxed FDI norms and focus to improve infrastructure across the country, other cities in India are likely to witness rise in PE investments going forward. The foreign direct investment policy enforced conditions with regards to project status, project size, lock-in periods, etc. due to which the eligible stock of real estate projects for foreign investors was limited predominantly to large projects with development size of over 0.54 million sq. ft.

Owing to relaxation in FDI norms in 2014 and 2015 the entire real estate stock is now accessible to foreign investors.

At the end of 2015, the Indian real estate market is estimated to have investment potential of $54 billion to $67 billion in completed grade A office stock that can generate $5.4 billion of rental income.

On the residential side, the market potential includes over 9,00,000 units that are scheduled for completion in the coming four years.