Flood fury: Why Brahmaputra’s trail of destruction has become annual ritual in Assam

The Brahmaputra, one of the mightiest rivers in the world, runs through Assam like a throbbing vein, sustaining lives and livelihood along its banks. Only the Amazon carries more water than the Brahmaputra, one of the largest rivers in the world with an annual flow of about 573 billion cubic metres at Jogighopa, close to the Indo-Bangladesh border. (Source: Express photo by Dasarath Deka)

The villagers had been talking all morning. There was some water seeping through the embankment along the Brahmaputra, they said, so Ruparam Das, 52, a fisherman in Kaivartagaon, a village in the river island of Majuli, decided to check out for himself. Around 3 pm on July 26, as he stood in front of the river, a few metres downstream from his house, he heard a loud bang. The river had broken through the embankment, but not where he stood. Instead, the river had torn through the wall right in front of his house. His house, as well as those of his neighbours, Bitul Das and Babul Das, had vanished. In their place flowed the Brahmaputra, an angry and swirling river of mud.

“I have nothing left, no house, no belongings. Luckily, my wife and four children rushed out a few seconds before this happened,” says Das, who is now among the 200 villagers at the Bongaon Primary School that has been converted into a relief camp.

The waters have since receded, but not before leaving behind a thick sheet of silt and sand, 10 to 12 feet thick, over hundreds of acres of what used to be fields of paddy and sugarcane. People in relief camps such as the one in the Bongaon school have since left and started repairing their homes. But Ruparam and 10 of his neighbours have nowhere to go. 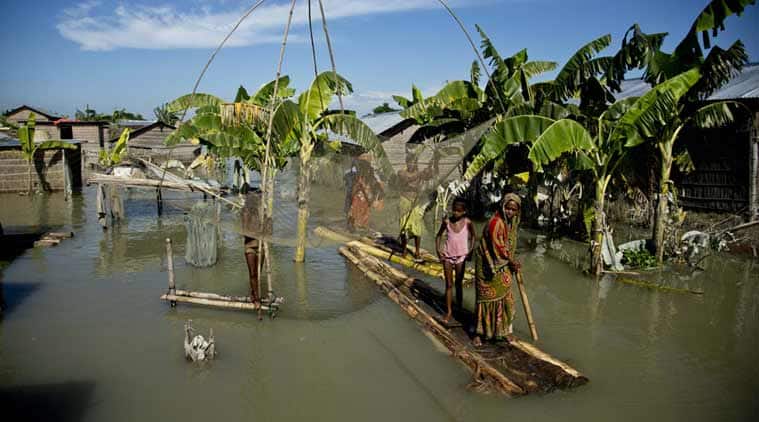 The Brahmaputra Valley is said to be one of the most hazard-prone regions of the country — according to the National Flood Commission of India (Rashtriya Barh Ayog) (Source: AP)

The Brahmaputra, one of the mightiest rivers in the world, runs through Assam like a throbbing vein, sustaining lives and livelihood along its banks. But every monsoon, the lifeline snaps, breaks all boundaries and causes widespread misery to about 20 of the state’s 32 districts.

The Brahmaputra Valley is said to be one of the most hazard-prone regions of the country — according to the National Flood Commission of India (Rashtriya Barh Ayog), about 32 lakh hectares or over 40 per cent of the state’s land is flood-prone.

So far, 35 people have lost their lives to the floods and about 12 lakh people have been temporarily displaced. According to the Assam State Disaster Management Authority, over 40,000 houses have borne the brunt of the floods, while the damage to infrastructure — embankments, dykes, roads, bridges, schools, anganwadi centres — runs into several hundred crores of rupees. 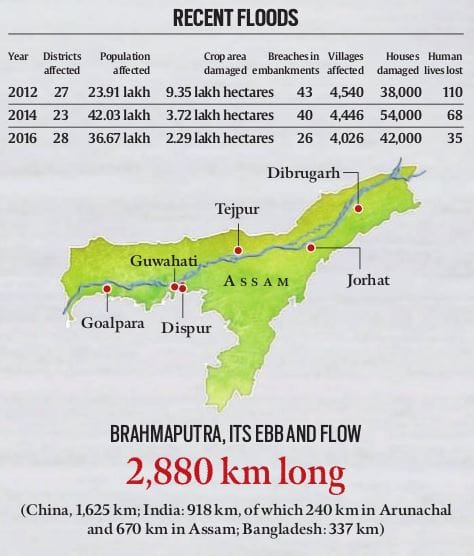 “Three successive waves of floods that began in May have caused huge losses to the state. While a final assessment of the damage is still being worked out, the Brahmaputra and the Barak (the second biggest river in the state), together with their numerous tributaries, have caused 26 breaches in embankments,” says state Water Resource Minister Keshab Mahanta.

As another flood ravages Assam, displacing hundreds of people and damaging property worth crores, the question is, why does the the Brahmaputra spill over with such alarming frequency?

Experts say the problem begins with the embankments, the very structures that are meant to keep the flood waters away.

The embankments constructed along the banks of the Brahmaputra, its 103 tributaries, many of which come down from Bhutan and Tibet, and the Barak run into over 4,475 km. Many of these structures, constructed over a period of 25 to 30 years based on the 1954 recommendations of the Rashtriya Barh Ayog, show visible signs of ageing. “Though embankments don’t have specific life-spans, the ones in Assam are designed on the basis of flood data of 15 to 20 years and are supposed to remain fit for 25 to 30 years,” says a senior officer in the state water resource department.

While natural wear and tear — surface run-off due to rain and rats digging burrows through the earthen structure — is one reason, most embankments across the state are also used as roads by villagers who ply motorbikes, bullock-carts, tractors, cars and trucks on them. Hundreds of families in Majuli and other flood-hit areas have made these embankments their homes by building bamboo houses on them.

The gaping hole in the embankment wall at Dergaon, an Assembly segment in Golaghat district of the state, tells this story of how the embankment lost the battle to the river.

Sitting at his home in Amguri, a village of Mising tribals in Dergaon that’s right behind the embankment, Bhishma Kaman, 65, says, “The water-level kept rising since June 25 and we were worried. The embankment, which was built some 40 years ago, had shown signs of seepage at three or four spots just in front of our village. We called up the flood control office and informed them. But even before the officials could arrive, on July 27, the river brought down the embankment.” Villagers repairing the embankment of a river voluntarily to protect their villages from flood water at Narayanguri near Manas National Park in Baksa district of Assam on Thursday. (Source: PTI)

While it has been raining in different parts of the state since the first week of July, experts say the above normal rainfall in upper Assam and Arunachal Pradesh is not the only reason for the floods; environmental degradation in neighbouring hill states is part of the problem.

Only the Amazon carries more water than the Brahmaputra, one of the largest rivers in the world with an annual flow of about 573 billion cubic metres at Jogighopa, close to the Indo-Bangladesh border. But its waters carry a great deal of sediments, raising the river by about three metres in places and thus reducing its water-carrying capacity. Landslides and increasing topsoil erosion in the river’s catchment areas, particularly in Arunachal Pradesh from where come down most of the Brahmaputra’s major tributaries, have added to the river’s sediments.

As the river rages on, it eats into the soft alluvial soil of the state, eroding land along the banks. A recent study sponsored by the National Disaster Management Authority (NDMA) said the Brahmaputra had eroded 388 sq km of land in the state between 1997 and 2008. According to the state government, Assam has lost more than 4.27 lakh hectares — 7.4 per cent of its area — to erosion by the Brahmaputra and its tributaries since 1950. That has made the Brahmaputra among the widest rivers in the world, more than 15 km in places.

Since July 24, the Aie, a tributary of the Brahmaputra that comes down from Bhutan and flows through Chirang and Bongaigaon districts, has eroded more than 2 sq km of land in Chota-Nilibari and Dababeel villages. “The river simply swallowed our land. It was so swift that only a few families could remove the tin sheets, wooden doors and timber posts of their houses, apart from a few household items. What could we have done? You cannot remove the walls and the floor,” says Swapan Basumatary, 32, a marginal farmer who lost three bighas in Chota-Nilibari and whose family is now lodged at a relief camp in Subaijhar, Chirang district, with 46 other families.

According to the Brahmaputra Board, deforestation in Assam and its neighbouring states have accelerated the process of land erosion. According to the Forest Survey of India Report 2015, Arunachal Pradesh’s forest cover has reduced by 162 sq km between 2011 and 2015, Assam has lost 48 sq km of forest cover in the same period, Meghalaya 71 sq km, and Nagaland 78 sq km.

“Managing the Brahmaputra is a big challenge. For instance, while the Mississippi’s catchment is four times the Brahmaputra, at 700 million tonnes per annum, Brahmaputra’s sediment load is four times the Mississippi’s,” says Anju Gaur, a water specialist with the World Bank. Gaur, who was in Guwahati last week to attend a two-day workshop organised by the state Department of Water Resource on floods and erosion, suggested a few best practices deployed in others countries to control the damage caused due to river floods.

“Constructing reservoirs to hold the water during the monsoons is one way of reducing floods. Besides, countries such as The Netherlands have adopted practices such as ‘room for the river’, a concept of rejuvenating wetlands that will then work as a flood cushion,” she says.

Chandan Mahanta of IIT Guwahati agrees that rejuvenating the state’s 3,500 wetlands is a “brilliant” concept. “We have numerous wetlands which can take off a major portion of the Brahmaputra’s energy during high floods,” says Mahanta.

The Brahmaputra Board, in its studies and master-plans, had suggested, in the early ’80s, the construction of storage dams upstream of the major tributaries, which would also help generate power. But while strong opposition by various groups has stalled one such project, the 2,000-MW Lower Subansiri project, most other projects are yet to take off. The Assam government, meanwhile, has asked experts to study if the main channel of the Brahmaputra can be dredged. One such attempt made in the late 1970s remained a non-starter though two dredgers were brought in from abroad.

The floods have dealt the new BJP-led government of Sarbananda Sonowal its first big challenge. Last week, the state government got experts from various agencies, including the World Bank, ADB, Brahmaputra Board, and IIT Guwahati, to take part in the two-day brainstorming exercise.

“While many states in the country have been crying for water, Assam has been suffering from lack of expertise to control this huge resource,” said Chief Minister Sarbananda Sonowal, during the workshop.

The government has carried out routine relief in the form of distribution of supplies and providing healthcare to those in camps. Families of the 35 people who died in the floods have been given Rs 4 lakh each.

But unlike his predecessor, Sonowal has refrained from asking the Centre for financial aid, something for which he has drawn a lot of flak. “What is the use asking for funds and packages in the middle of the floods? We are making a thorough assessment as the floods recede. The Centre is sending an inter-ministerial team. These reports, along with the recommendations of the experts, will help us in finding a permanent solution to the floods,” says Sonowal.

Immediately after the floods of 2014, which affected over 42 lakh people and left 68 people dead, the Tarun Gogoi-led state government had asked for Rs 5,700 crore from the Centre — Rs 3,500 crore to strengthen embankments, Rs 2,000 crore for anti-erosion measures and rehabilitation of affected people, and Rs 200 crore for construction of 5,000 raised platforms and relief centres.

While successive governments have failed to come up with a solution to the state’s recurring floods, Pratima Boro believes she has found a way out. “We will have to simply learn to live with it,” says the 67-year-old, sitting outside a shed along the Guwahati-Morigaon state highway that has been her home for over 10 days. Pratima is glad her two daughters are married into families who live in the Kharghuli hills in Guwahati and not in villages such as theirs. “The floods come and go every year and some government officials come, take down our details and go back. We get a few kilogrammes of rice, some dal, mustard oil and salt for a few days. By the time we repair our houses on our own, the monsoon is back and, with it, the floods,” she says.

Brahmaputra, its ebb and flow

Hockey grapples with Olympics ‘wake up call’ in Rio