Kher said a “perception” was being created about India being intolerant. 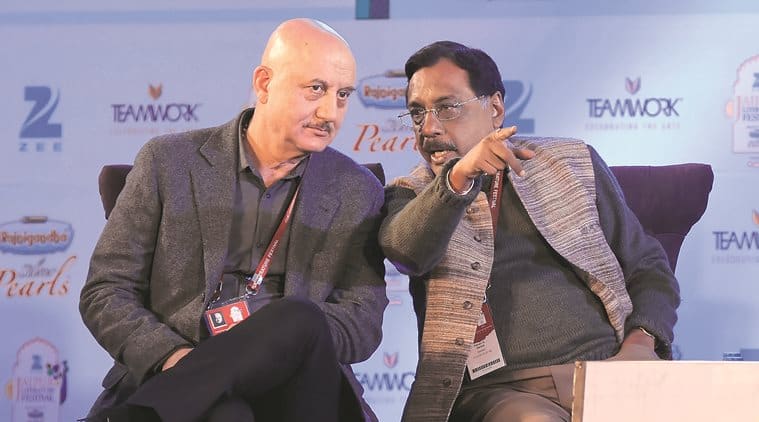 Sparks flew during the closing session on the last day of Jaipur Literature Festival as panelists, which included actor Anupam Kher, AAP MLA Kapil Mishra, commentator Suhel Seth and journalists Madhu Trehan and Salil Tripathi, debated the limits on freedom of speech. The session — ‘Is Freedom of Speech Absolute and Unconditional’ — turned into a political slugfest.

Kher said a “perception” was being created about India being intolerant. “With freedom of speech comes a sense of responsibility. That’s very important…Can you tell your father at home that you’ll slap him? But here you can say that the PM is a coward and a psychopath,” he said, hinting at Delhi CM Arvind Kejriwal’s tweet against PM Narendra Modi. “There is no nation in the world where you have so much freedom of speech that you have here,” said Kher.

Responding to Kher, Mishra said: “I haven’t elected my father.”

Alluding to statements by BJP leaders against Pakistan during the 2014 Lok Sabha polls, he added: “My father didn’t say that if our neighbour slaps you, I’ll slap him ten times, but is now savouring chashni (sugar syrup) with the neighbour. If my father did go and have cake with the neighbour, I’d call my father a coward too. If he said I’ll pay your school fee, but later said ‘let’s click a selfie first’, I’d tell him he’s a psychopath…You throw ink on my leader, abuse him, throw a stone, nobody goes to throw stones on your home.”Mishra, however, was cut short by chants of “Modi, Modi” from the crowd.

While journalist Salil Tripathi said “burning a book is a prelude to burning the people”, Madhu Trehan attacked the idea of censorship saying that it indicated that you are “coming from a superior place; that we the censors, the politicians, are superior because we know what is good for you. But you are not responsible enough”. Former diplomat Pavan K Varma added: “Reasonable restrictions are those which a sane society learns to accept for itself.”

As festival producer Sanjoy Roy, who was moderating the debate, called for closing comments, Kher asked people to be ‘doers’ and not ‘criticisers’. Tripathi, however, reminded him that saying that India had more freedom was not enough. “Please go to Dharwad (Karnataka) and tell that to Dr Kalburgi’s family. These are the people who live in India, but their freedoms have been restricted by different governments, by different mobs; they are the ones setting the rules,” he said.

At the end of the debate, a majority in the audience raised the hands to indicate they were “against the motion” that was debated by the panelists.