Dalits thrashing, suicide attempts, arson: What has happened so far in Una

The opposition attacked the BJP government for failing to maintain social harmony in Gujarat. 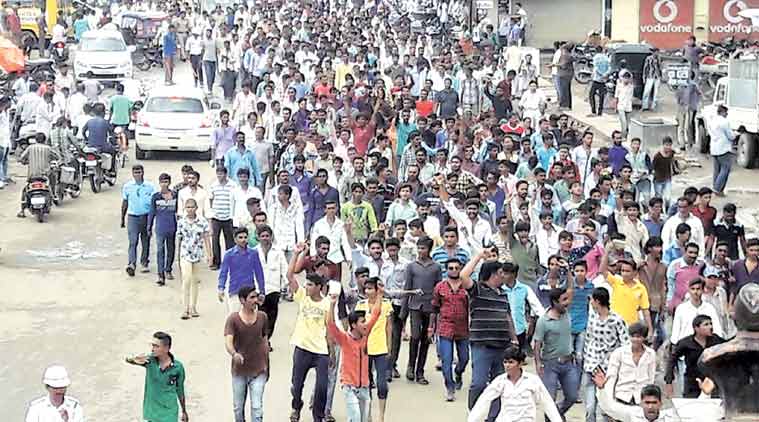 On July 11, a shocking video of seven Dalit men being brutally beaten up by a group of gau rakshaks for allegedly skinning a dead cow in Gujarat’s Una district surfaced. In the video, some of the victims were seen tied to a car, while the accused were beating them up. It was later reported that the victims were also paraded and flogged publicly all the way to the police station. The incident sparked protest and police arrested two accused the next day.

However, Dalits took out a rally and blocked traffic in the main square of Una town of the district. After the police intervened and tried to persuade them, the protesters dispersed and allowed vehicular movement. Later, a delegation of the community went to the office of Una mamlatdar and submitted a memorandum demanding public thrashing of gau rakshaks who attacked and insulted their community members.

A week later, a Congress councillor and four other Dalits attempted suicide in front of police station in Gondal by allegedly consuming phenyl alleging inaction by the authorities in the case. Policemen who had been deployed in anticipation of the act, snatched away bottles from the five and a team of paramedics, which had been stationed there, started treating them on the spot. “They were carrying separate bottles of phenyl. But our team stationed on the spot prevented them from drinking it. However, as a precautionary measure, doctors are performing stomach-wash. The five are normal and can be discharged from hospital any moment,” Gondal city police inspector Vijay Chaudhary had told The Indian Express.

Also a group of Dalits camped outside the office of district collector in Surendrangar with animal carcasses loaded in five vehicles. They also demanded strict action against those who tortured the Dalits and threatened that they will stop disposing animal carcasses if attacks continued on their community members.

With growing anger in the Dalit community, the superintendent of police suspended Una police inspector and an assistant sub-inspector (ASI) in charge of the area where the alleged incident had taken place. The suspensions came on the day a member of the National Commission for Scheduled Castes (NCSC) met the victim family.

Facing flak for the incident, Gujarat Chief Minister Anandiben Patel ordered a CID inquiry in the matter. She also announced that a designated court will be set in consultation with the High Court for speedy trial in the matter. She asked for a Special Public Prosecutor to take up the case, adding that the investigating officer has to submit the charge sheet to the court in 60 days. The Chief Minister said that the state government would bear all the medical expenses of the victims.

However, a policeman was killed in mob violence and a Dalit committed suicide as protests against the incident snowballed across Saurashtra region. Over a dozen people, including seven policemen, were injured in incidents of stone-throwing in Amreli. This was followed by five more cases of attempted suicide by Dalits. The total number of attempted suicide cases later went up to 12. Resorting to stone-throwing and sit-in, the protesters blocked traffic on the main highway to Rajkot and Jamnagar.

The state transport authority cancelled buses on several routes in Rajkot, Porbandar and Junagadh districts. There was also an attack two state buses in Amreli by a mob of 2000 men. Nearly 90 per cent of bus trips scheduled in Jamnagar, Rajkot, Junagadh and Amreli divisions were cancelled, affecting the movement of three lakh passenger that forced the chief minister to appeal for peace. In all, 500 protesters were arrested from different parts of Saurashtra for indulging in violence, arson, stone-pelting and vandalising public transport buses.

The issue also rocked the Parliament when the monsoon session begun. The opposition attacked the BJP government for failing to maintain social harmony in Gujarat. While JD(U) leader Sharad Yadav sought a ban on ‘Gau Rakshaks’, CPM general secretary Sitaram Yechury said the rising crime against dalit is a cause of worry. BSP supremo Mayawati too condemned the thrashing of Dalits in Una and said its unfortunate that Dalits remained marginalised despite despite BJP, Congress long tenure after independence. “Even after the constitution was laid down by Baba Ambedkar, Dalits still have not received their full rights,” said Mayawati.