Three of the 19 arrested are juveniles. 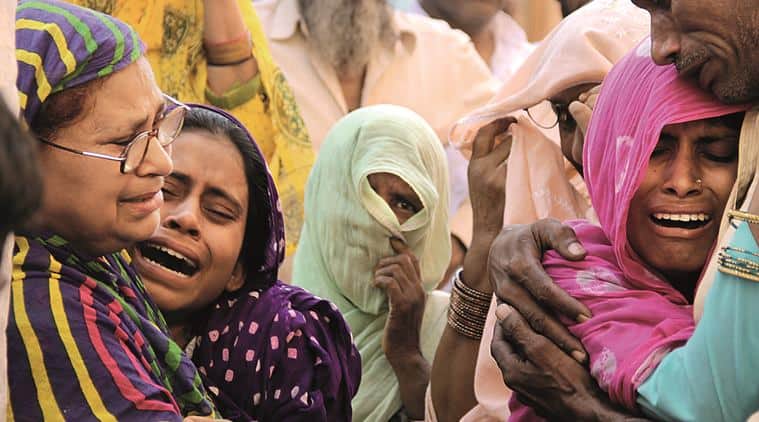 A YEAR after the lynching of Mohd Akhlaq in Dadri’s Bisara village on September 28 last year, women relatives of the 19 accused have threatened suicide unless they are released and Akhlaq’s brother Jaan Mohd is arrested for allegedly killing a calf.

Three of the 19 arrested are juveniles. “If our children are not granted bail soon, all of us will commit suicide – either sit on an indefinite hunger strike or set ourselves on fire,” said mother of Rupendra, one of the arrested. “Our sons are innocent. We believed these charges will be proved false but the court has just been giving one date after another for hearing.”

Krishan Sisodia, whose son Puneet was arresred, said they would ensure the Samajwadi Party would not win any seat in the region. “The police picked up any young man they could catch hold of,” she said. “Their fault was that they were living under a government which does not care about the sentiments of our community. All our children are young men, studying. A year has gone by and there is no hearing. Where do we go for justice?”

The demand for Jaan Mohd’s arrested came after a police complaint and plea in court by Bisara resident Surajpal, who alleged a stray calf had been slaughtered by Akhlaq, Jaan Mohd and other members of the family on Eid ul-Azha last year. Following an order by a local court, an FIR against Akhlaq and six others of the family had been lodged under sections of the cow slaughter and animal cruelty acts. Another court order stayed the arrests of all members except Jaan Mohd. Police say investigations are on.