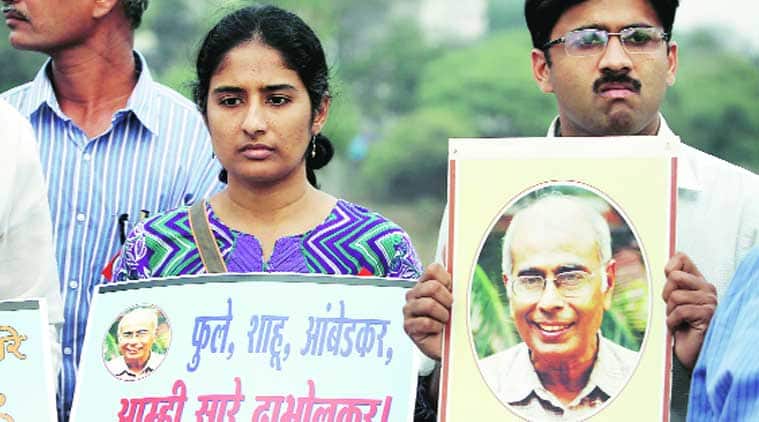 Dabholkar was shot dead by two unidentified persons on the Omkareshwar bridge near Balgandharva auditorium in Pune while he was on a morning walk around 7.15 am on August 20, 2013. The assailants fled on a two-wheeler..

The Central Bureau of Investigation (CBI) on Wednesday informed the Bombay High Court that it had identified two suspects in the killing of rationalist Narendra Dabholkar. However, the agency still faced flak from the court for the “lackluster approach of its officers” in carrying out the investigations.

The high court demanded to know the action taken by the CBI, considering the murder took place two years ago. The agency’s advocate Rebecca Gonsalves submitted the names of suspects to the division bench of Justice Ranjit More and Justice Rajesh Ketkar. “They are all members of the same organisation,” she said.

The HC was hearing petitions by the kin of rationalists Narendra Dabholkar and Govind Pansare seeking a court-monitored probe, while expressing unhappiness with the investigation being done by the CBI in Dabholkar’s case, and an SIT of the Maharashtra Police in Pansare’s case.

“The SIT is active, but CBI seems to be lagging behind. While CBI has better access to technology, they don’t have the manpower,” said the court.

Both the CBI and the SIT have now been asked to submit a detailed report on the investigations carried out by them in the next four weeks. The matter will now be heard on November 30.

On October 7, the HC had asked the CBI and the SIT to inform the court about steps taken to nab 2009 Goa blast accused Rudra Patil, who is also a suspect in Pansare’s murder.

“There is no progress at all. No efforts have been made to nab Rudra Patil. Prima facie there is a nexus in all these cases,” said the court on Wednesday.

Gonsalves, however, argued their investigation had not revealed Patil’s involvement. The judges questioned the agency’s conclusion with Nevagi pointing out that Sarang Akolkar, who is also wanted in the Goa blast case, was a suspect in the Dabholkar case.

“Is this not sufficient? How can you say he has no connection?” asked Justice More, questioning if their conclusion about Patil not being involved was based on some evidence. Gonsalves said that the two eyewitnesses had refused to identify Akolkar after seeing his picture. She insisted that the CBI had made some progress and identified two mobile numbers of persons who were present at the scene of the crime. Nevagi, however, asked why the phone numbers had not been used to reach the persons.

“The officer heading the investigations, who is of the rank of deputy superintendent of police, is coordinating from New Mumbai. Six officers, who have been deputed by Maharashtra government, are sitting in Pune,” added Nevagi.

When the court questioned why the officer was not in Pune, and whether the team comprised of any officers from Pune, Gonsalves said there were none. “They are, however, devoting sufficient time,” she said.

The HC asked if there was proper coordination between the CBI and the SIT.

In Pansare’s case, Nevagi said he feared that accused Sameer Gaikwad, who belongs to the Sanatan Sanstha, would get bail if the chargesheet was not filed in 90 days. The prosecutor appearing for the government informed that the SIT planned to file the chargesheet withing that period.