Connoisseur & Smuggler:The 84-year-old art dealer and his collection of ‘stolen’ idols in Chennai

R Nagaswamy, former director of Tamil Nadu Archaeology Department who accompanied the raid team, estimates that many idols were centuries old and estimated their value at several million rupees. 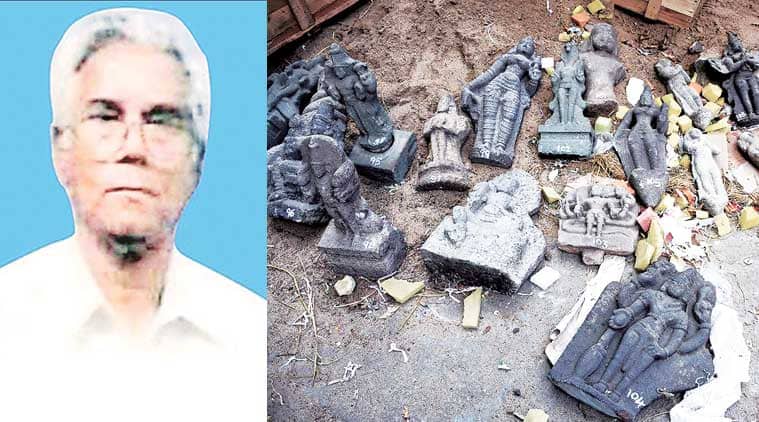 Investigators now say Deendayal used to ship such items to the US and European countries.

Known as an art dealer, connoisseur and even an inspiration to contemporary artists, he was at the same time suspected to be an international smuggler but never caught for decades. By the time the net finally closed around him, M Deendayal was 84.

This was after the unearthing of a massive cache of ancient idols from his premises in Chennai. Searches by the Tamil Nadu CID’s idol wing in two godowns, a gallery and the residence of Deendayal have so far led to the recovery of over 254 ancient stone idols, 151 antique artworks on canvas and Tanjore paintings, 28 antique wooden artefacts, 54 metal idols including three huge ones and a small ivory statue. And the searches are still continuing, A G Pon Manichakvel, inspector general of police.

Investigators now say Deendayal used to ship such items to the US and European countries. He apparently packed them into containers and labelled those “Handicrafts”.

The racket is being seen as one of the biggest since the arrest in 2011 of Subhash Kapoor, a Manhattan art dealer now lodged at Chennai’s Puzhal Prison and facing trial.

Deendayal, who was absconding after the initial raids on his premises, surrendered on June 10 after the government impounded his passport. Officers said he hasn’t been registered as arrested as he is cooperating with the investigation.

The CID (idol wing) says it had no credible evidence against Deendayal earlier. The racket was busted on May 31 following the arrest of three persons from his premises, allegedly agents who sold stolen items in the Mumbai market. “Earlier tip-offs against Deendayal had all turned out to be false. But after the arrest of the three people, we deployed teams and started searches from June 1 with court warrants in his godowns and residence on Murray’s Gate Road,” said an officer.

“Deendayal has clients in Europe and many dealers in America,” the officer said. He added Deendayal was also selling idols to buyers in India, including a main dealer in Mumbai. “He sold a painting at Rs 1 crore to a Mumbai dealer. That, and another case registered against him in 2005, are being probed.”

S Vijaya Kumar, a Singapore-based private investigator said his team had been tracking Deendayal since 2004 as he was prime accused in an idol smuggling case and jumped bail, escaping to Bangkok before he resumed his business in Chennai again. Vijaya Kumar is a co-founder of India Pride Project, a group of NRIs that uses public and official networks to look for stolen Indian idols in various international museums.

As an art expert, Deendayal is also said to have inspired some of the finest. The late M Reddeppa Naidu, one South India’s leading painters, had said in interviews to The Indian Express in 1985 and to The Independent in 1990 that it was Deendayal who inspired his Mahabharata project, a series of paintings in 18 large canvases, one for each parva, and done between 1972 and 1974.

“Around June 1972, Deendayal read me a poem from the stree parva – Samsara Grahanam, which had been translated into Telugu from Sanskrit in the 3rd century AD by Nanayyabhatt. He requested me to do a painting based on it. I did one, which both he and his wife liked very much. Deendayal then suggested that I might like to do one for each parva,” recalled the painter, a national award winner and a student of veteran artist K C S Panicker.

It was Deendayal who first exhibited Naidu’s work at Ashoka Hotel in Delhi in 1974 and then at his Aparna Art Gallery, followed by a retrospective of his works in Madras.

One of his customers from the 1990s said Aparna Art Gallery, founded in 1983, was one of the top five sellers of Tanjore paintings in Madras during that period. “He used to sell more than 15 Tanjore paintings a month, and had an active clientele in Mumbai and Delhi too,” she said.

Besides Aparna Art Gallery in Chennai and two godowns on the street where he lived, two more galleries in Chennai and one in a Bangalore hotel, too, have now been sealed, police said.

“Deendayal is quite a big fish and possibly linked to Kapoor,” said a police officer. “We are probing his role in the smuggling of a stone idol of Ardhanarishwarar from Virudhagereeswarar temple in Virudhachalam (which was later sold for $3 million to an art gallery in New South Wales in 2004 by Kapoor, and later returned to India),” said an officer.

Vijaya Kumar of India Pride Project is widely credited with having played a key role in tracking Kapoor along with US and Indian agencies before his arrest from Frankfurt airport in 2011. Kumar said India is losing 10,000 major artefacts every decade and this doesn’t include smaller paintings, terracotta, coins, wooden temple cart parts, pillars and jewellery.

When Kapoor was finally caught in 2011 following a five-year-long operation by FBI and Indian agencies, what had been recovered from his godowns in Manhattan were some 2,600 items worth $100 million. In comparison, the raids in Chennai have unearthed some 500 items including stone, metal idols and antique paintings in the last two weeks.

On Friday, dozens of temple trustees and managers from south India flocked to Deendayal’s house to try and identify idols and paintings stolen from their premises. These included isols of Shiva in the form of Tripurantaka Murthy, Nardhana Ganapathi Devi, Sivagami Amman and Natarajar Asthiravedar.

R Nagaswamy, former director of Tamil Nadu Archaeology Department who accompanied the raid team, estimates that many idols were centuries old and estimated their value at several million rupees. Some items in black stone were over 900 years old.

A senior officer said Archaeological Survey of India experts have confirmed that many idols were more than 10 centuries old and had been stolen from temples in Kumbakonam, Myladuthurai, Tiruvarur and Tanjore districts of Tamil Nadu besides temples in Karnataka and Andhra Pradesh in the last few years.

Euro 2016: Kevin de Bruyne had now fears of being dropped by Belgium