Claiming there’s an ‘ambience’ for it, Nitish govt bans liquor in Bihar

Bihar on Tuesday would become the fourth state in India to impose a total prohibition of alcohol. 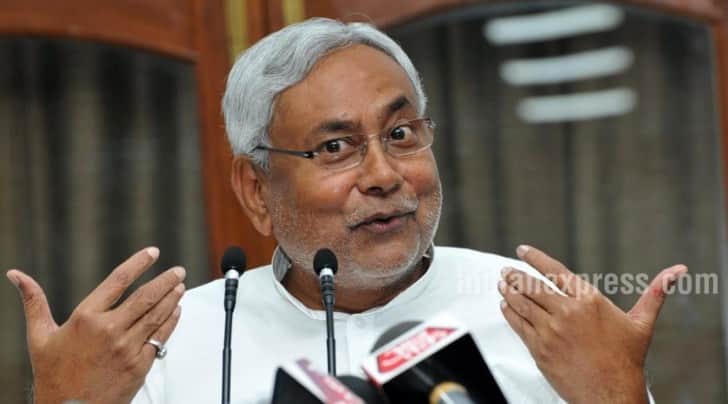 Citing the “overwhelming response” to the ban on country liquor, which was enforced in Bihar from April 1, Chief Minister Nitish Kumar’s cabinet Tuesday extended the ban to Indian Made Foreign Liquor (IMFL), making Bihar a dry state with immediate effect.

The state government had earlier planned to roll out the liquor ban in a phased manner. After the ban on country liquor, the state government said it would continue selling IMFL at 655 liquor shops in towns and cities. But Nitish, who had assured he would ban liquor in the state while campaigning for the 2015 assembly polls, has been under opposition pressure to deliver on that promise.

“We were overwhelmed by people’s response to the ban on country liquor. We had been getting numerous calls from women groups and other sections of people about unauthorised liquor stocks. Our total ban is prompted by the people’s response. We were able to create an ambience that supported complete ban on any kind of liquor,” Nitish said, adding that all IMFL stock will be destroyed. Asked about individual liquor stock, he said, “That also has to be destroyed. After all, liquor is not an antique to be stored and preserved.”

Asked if toddy is covered under the ban, he said, “There has been a ban on toddy sale in the state since 1991. Toddy is nothing but alcohol, and it is banned. But fresh palm and plum extracts, including its juice which is extracted in the morning and is known as neera, would be bottled and sold. Fresh palm juice is like a health drink; there is an Indian Council of Agricultural Research (ICAR) study to support this.” But he added that once neera is exposed to sun, it gets fermented and becomes alcohol.

Liquor would not be served in hotels and restaurants either, Nitish said. Only addicts can procure liquor, that too after getting a prescription from a doctor. Army cantonment areas can continue to sell alcohol.

Sources said Nitish decided to enforce the complete ban as there were apprehensions that the Bihar Excise (Amendment) Act, 2016 could be misused by the police, the district collector or the excise department, and that IMFL could illegally reach villages, where it is banned.

Now, the only places that need to be monitored are areas bordering Jharkhand, West Bengal, Uttar Pradesh and Nepal. “Liquor shops in neighbouring states must not be under the impression that their sales would shoot up. We have put in place a system of digital locks for liquor containers travelling through Bihar. Such locks can be opened only after vehicles carrying liquor or spirit cross Bihar. We have already spoken to neighbouring states’ police chiefs. Ultimately, these states will also have to follow Bihar’s prohibition example,” Nitish said.

“But, the tremendous response of people particularly women and children against liquor in Patna and other towns in a short period of four days only convinced us that a conducive environment against alcohol has been created in the state and that’s why we decided to go for total ban on liquor after four days only,” he said.

On ‘toddy’ which has created controversy in recent days following intervention of RJD President Lalu Prasad against its stoppage in view of interest of people associated with the trade, Kumar said the state cabinet decided to strictly impose the 1991 guidelines which allows consumption of “Neera” (drink from palm trees before sunrise) but disallows consumption of ‘toddy’ (after sunrise when the palm tree liquid gets fermented and gains alcoholic properties).

The 1991 guidelines prohibits sale and consumption of ‘Neera’ within 50 metre of places like hospital, education institutions, religious places among others in towns and 100 metres radius in rural areas, he added.

The chief minister said “Neera” would be allowed, while ‘toddy’ drink would be barred.