Prime Minister Modi said Aadhar cards had helped weed out 5 crore fake gas connections and now subsidy was being given only for 13 crore units. 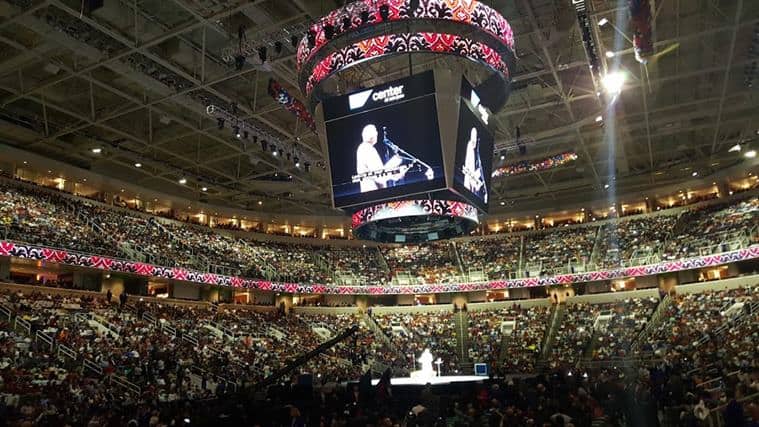 Prime Minister Narendra Modi on Sunday addressed a large gathering of Indian Americans in Silicon Valley, in the presence of several Congressmen, saying the magic in the fingers of Indians here was responsible for changing the world’s perception of the country.  Using the analogy of cricket broadcasts, he said Indians in the US had a better view of what was happening in India than those who lived there.

“You are making the world change from here. Those who resist change will become irrelevant in the 21st century,” he said to a near-packed arena in San Jose.

Standing on a podium that turned slowly so that he could address everyone present, he said the brain drain that we discussed for many years has now actually become brain gain. “I look at it differently. This is actually a brain deposit that is waiting for an opportunity to be of use to the motherland,” he said, adding that the time has come.

Highlighting how he had opened a new silent front against corruption,  he said Aadhar cards had helped weed out 5 crore fake gas connections and now subsidy was being given only for 13 crore units. This he said was a saving of at least Rs 19,000 crore. He added that 30 lakh people had given up their gas subsidy under the Give It Up campaign.

The PM remembered the Gaddar movement in the US by Sikh migrants in the early 20th century. “If those who came to work on the farms then wanted to do something for the independence movement,  the youth of today want to work for alleviating poverty back home,” he said. The speech also touched upon the first Indians who made a mark in the West Coast, among them Jai Prakash Narayan who studied in California.

“The world now accepts that this century will be India’s. And this has happened not because of me but the 1.25 billion Indians,” he said adding that India has now moved from the fringes to become the focal point.

Often having to pause for the cheering crowds to settle down, he said his confidence in the country stemmed from the fact that India was young. “A country with 800 million youth and 1.6 billion young arms cannot be held back.”