At gaushala meet, why ministers were a bit cowed down

Discussions soon got overshadowed by sloganeering against cow slaughter and chants of ‘Bharat Mata ki Jai’ and ‘Gaumata ki Jai’. 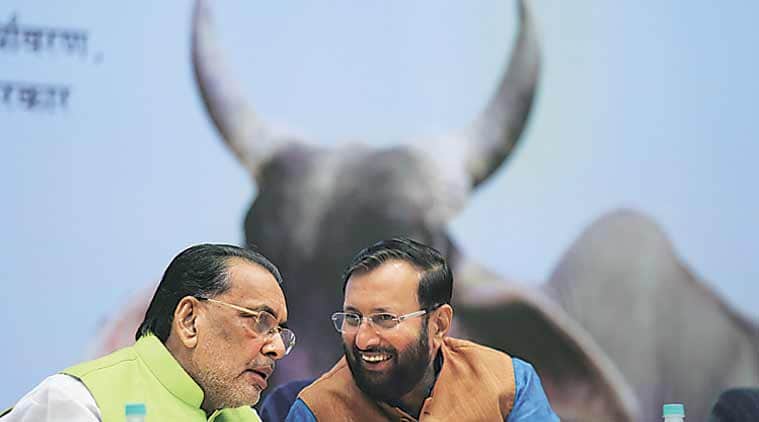 Not on Monday though, when the convention centre hosted the first-of-its-kind day-long national conference on ‘gaushalas’ (cowsheds), organised jointly by the Agriculture and Environment ministries.

Speakers, including two Union ministers, were repeatedly shouted down by the audience, their claims were challenged, and on a couple of occasions at least, arguments among the audience nearly erupted into fights. Some were simply angry that a booklet distributed at the venue had the picture of a foreign cross-bred cow on its cover.

The conference was meant to discuss ways to strengthen the cow economy, increase milk yields and promote indigenous varieties of cattle. And the audience consisted mainly of farmers, cow-owners and those associated with gaushalas.

But the discussions soon got overshadowed by sloganeering against cow slaughter and chants of ‘Bharat Mata ki Jai’ and ‘Gaumata ki Jai’.

Agriculture Minister Radha Mohan Singh and Environment Minister Prakash Javadekar were both at the receiving end.

The Agriculture Minister was speaking about government initiatives when participants rose to say that they were not getting the benefits of any of those schemes. As Singh tried to reason with them, arguing that he had visited villages where the schemes were in operation, more stood up and joined the chorus.

Singh completed his speech quickly and left to attend a meeting at the Prime Minister’s Office on the drought situation. But similar scenes were witnessed when Javadekar rose to speak and mentioned government efforts to curb cattle-smuggling at the borders.

Home Minister Rajnath Singh was supposed to be the chief guest, but he skipped the event because he was required to be somewhere else.

A few presentations were made, and it did not help matters that the slides were in English. And the protests ensured that the presenters at least spoke in Hindi. Finally, a tea break was announced to bring the inaugural ceremony to an end.

No political statements were made during the conference, but it was clear that there was a group sympathetic to the government and another angry with it.

“Why are people clapping at what the government is saying? Has the government put an end to cow slaughter? Till that happens, everything that this government says is meaningless. This government is not serious on cows,” said Jitendra Malik, Sonepat head of Goshala Sangh of Haryana. Malik was one of the first and frequent disrupters of speeches.

A few people tried to persuade him to speak only when the discussions were opened up for participants. “I will speak whenever I feel like,” he retorted.

Another participant, who identified himself as Mahendra from Mathura, suggested that some people had come to this conference only to disrupt the proceedings. “They will shout and hijack, and nothing will happen,” he said.

Some claimed that cow urine and cow dung could cure all kinds of diseases, others demanded that the two be recognised by the AYUSH department as products with medicinal properties, and another wanted organic fertilisers from cow waste to be subsidised.

There was even a suggestion that the government should buy cow-dung at Rs 4-5 per kg.