How to use Rajnath Singh’s name to showcase Tarun Gogoi

The two awards were given by separate Delhi-based publications. It is on that count that the BJP qualifies the presence of its ministers in the hoardings. 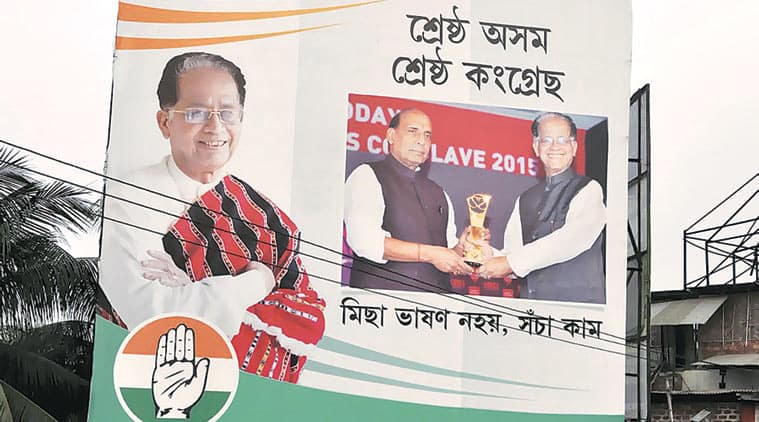 Gogoi with Rajnath on display in Guwahati. Dasarath Deka

The Congress in poll-bound Assam has put up a number of hoardings apparently aimed at embarrassing the BJP.

“The BJP has been saying our government has done nothing in 15 years. With that hoarding we are only telling the people that it is the BJP’s home minister who has handed the Best Infrastructure Development award to our chief minister,” said APCC spokesman and former industry and power minister Pradyut Bordoloi. “We also have a hoarding in which Union Power Minister Piyush Goyal is giving an award to Gogoi for best state in power sector development.”

The two awards were given by separate Delhi-based publications. It is on that count that the BJP qualifies the presence of its ministers in the hoardings.

“Yes, it is true that the award was handed over to Tarun Gogoi by the Union home minister. But, first, it is not a Government of India award. And, second, unlike the Congress, we in the BJP have no problem appreciating what is good. In this case, the home minister definitely appreciated Tarun Gogoi. That shows the magnanimity of the BJP, in sharp contrast to the Congress that is only making false allegations against the BJP government at the Centre,” said former BJP state president Siddhartha Bhattacharyya, who is now the Northeast spokesman of the party.

Two months ago, the BJP had been upset with Congress hoardings showing Prime Minister Narendra Modi in a suit, with the text referring to it as worth Rs 15 lakh. “While he failed to keep his promise of bringing back black money from abroad and depositing Rs 15 lakh in each citizen’s bank account, he certainly wore a suit worth Rs 15 lakh!” it said.

The BJP too has targeted Gogoi: one hoarding shows a cartoon of Gogoi and a student studying under a candle, with the caption reading “No power, no electric wire and pole”. Gogoi is shown as showing “baad diya-hey” — or “forget it”— an expression he often uses to dismiss the BJP.