As US pushes defence intelligence sharing pact, India says ‘not ready yet’

Two senior American officials from the US Defence Intelligence Agency are scheduled to visit Delhi next month to deliberate over the agreement. 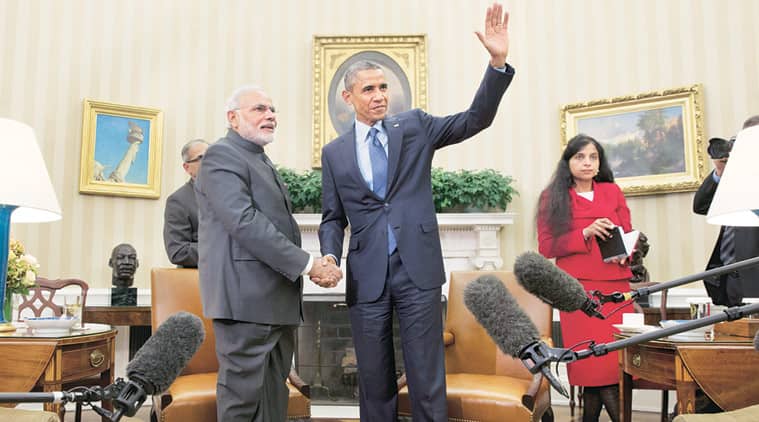 With Modi as PM, the Obama administration was hopeful of India signing the agreement.

Amidst talks over Prime Minister Narendra Modi’s forthcoming visit to the United States in June, American officials are grappling with Indian government’s reluctance to sign the Defence Intelligence Sharing agreement between the two countries.

Indian officials confirmed that US Defence Secretary Ash Carter had raised this issue in delegation-level talks with Defence Minister Manohar Parrikar at Delhi earlier this month. Senior government officials, however, said that while the US had been insistent on it — and has raised it at political, bureaucratic, and military levels — they have told the US that “we are not ready for it yet”.

Two senior American officials from the US Defence Intelligence Agency are scheduled to visit Delhi next month to deliberate over the agreement. However, sources said, their meetings with senior Indian officials were yet to be confirmed.

“Defence intelligence cooperation is mentioned in the Defence Framework Agreement signed between the two countries in 2015. Enhanced exchange of military intelligence has also featured in all the discussions between PM Modi and President Obama but we have seen no progress in operationalising it,” a US official told The Indian Express.

India and the US had signed a defence intelligence sharing agreement in 2003, which focused on exchange of intelligence pertaining to terrorism and countries supporting terrorism. No countries were mentioned by name, although even at the last moment, US officials had wanted the draft to be amended to include ‘rogue states’ like Iran, Libya and North Korea, which India flatly refused to do.

“What was signed in 2003 in Washington DC was after consultations and acceptance of all the other ministries here, and it took care of India’s strategic interests without compromising our autonomy or interests in any way,” said Lt General (retd) Kamal Davar, who was the founder chief of the Defence Intelligence Agency and signed the 2003 agreement.

When that agreement expired in 2008, the UPA government, with AK Antony as defence minister, did not extend the agreement. Following the return of BJP government in 2014, and discussions between Prime Minister Modi and President Obama, US officials were hopeful of India signing another agreement similar to the 2003 one.