He spends his entire day guarding the 207-ft-tall flag in the heart of Delhi. Does that make him a patriot? Ram Avatar thinks he qualifies. 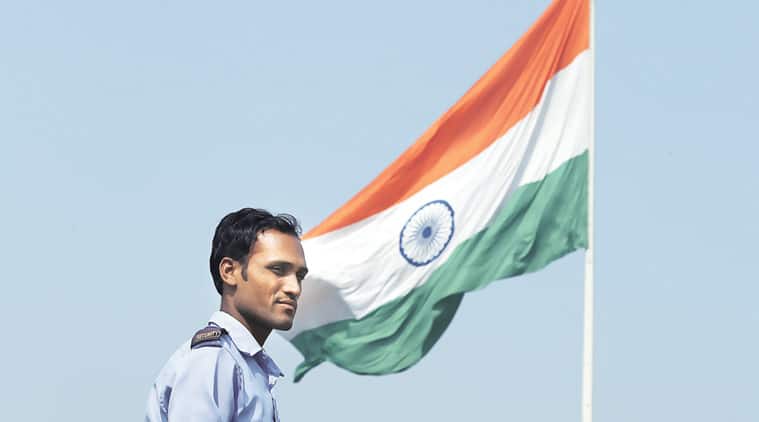 Bringing the flag down in case of any damage, or hoisting it, both are elaborate affairs given the size.(Express Photo by Praveen Khanna)

Who is a patriot, who isn’t. As the nation demands an answer, Ram Avatar, 25, attempts one of his own: “Bahut aise log yahan mil jaayenge jo sirf jhande ke saath apna tasveer khinchwaane aatey hai… Mujhe pata nahin ki wo kitna asli deshbhkath hai… (A lot of people come to take their photographs with the flag. I don’t know how patriotic they are).”

As someone whose job it is to guard the 207-foot-tall ‘monumental flag’ at Central Park in Delhi’s Connaught Place, he takes his job — and the symbolism attached to the flag — very seriously. Which is why he is worried about the approaching summer. “There are hot and gusty winds in Delhi during the summer months. Heavy winds tear the flag. If a torn flag flies in the sky, it is an insult to our nation. We don’t let that happen. So the moment we notice any damage, we immediately replace the flag,” he says, wiping the dust off one of the several plaques around the flag, that flutters above the crowd of weekday shoppers in the heart of Lutyens Delhi.

Last June, the flag was replaced 11 times within a span of 30 days. It has only been 48 hours since the flag was last replaced. At any given time, the Flag Foundation of India, former Congress MP and industrialist Naveen Jindal’s organisation which installed the flag at Connaught Place, keeps three flags on standby.

“Replacing the flag is not easy at all. It’s huge. This 60 x 90 ft flag turns into a parachute when we try to lower it down,” says Ram Avatar, talking about the only time there is a burst of activity in his otherwise mundane job schedule.

And it all begins with spotting. So as young men loiter around Central Park, Ram Avatar looks up, keeping an eye on the flag. The moment he spots a damage in the flag, he immediately dials his boss, the owner of the firm that has been hired for the security of the flag. Soon, a maintenance team is alerted and a van carrying half a dozen people arrives with a new flag. Next, the lock at the bottom of the flag mast is opened. Levers are unwound. Metallic chords are moved up and down. And the flag is lowered.

“We have to be extremely careful while lowering the flag. Not a single inch of the tricolour should touch the ground. We spread a huge tarpaulin sheet on the ground so that even if a torn piece of the tricolour falls off, it must land on the tarpaulin, not on the ground,” says Ram Avatar with a hint of pride. He then proceeds to talk about the “karn (hypotenuse)” and angles at which the flag will land on the tarpaulin. “I did science up to Class XII and then my graduation in history,” he explains.

As the damaged flag goes directly into a plastic drum, which is always placed near the mast, a new flag is slowly raised. The whole process lasts about an hour and a half. The damaged flag is then sent to a local repair workshop.

“We have to be careful while hoisting the flag too. It’s so huge that it gets easily entangled in the branches of nearby trees,” Ram Avatar says.

Commander K V Singh, CEO, Flag Foundation Of India, says each polyester silk flag costs Rs 65,000 and the average monthly maintenance cost for the Central Park flag is around Rs 1 lakh. “Installing a 207-foot-high flag mast costs Rs 45 lakh, but the one at Connaught Place costs us around Rs 1.5 crore.”

The Foundation has installed 64 ‘monumental flags’ so far — 30 of 207-foot-tall and 34 100-ft ones — across the country with the help of state governments and institutions.

“We have installed a flag in the Himalayas, at Tawang in Arunachal Pradesh, at an altitude of 14,200 ft above sea level. But it’s not about how tall they are. What matters most is whether they are well maintained. Many people have installed tall flags, but they are finding it very difficult to maintain,” says Singh.

That’s where Ram Avatar comes in. Sitting under the shade of a pump house in a corner of the park, he eats his lunch — five chappatis and a morsel of aloo-gobi sabzi wrapped in aluminium foil.

He says it was two years ago that he came to Delhi from Damoh in Madhya Pradesh. He worked as a security guard till he landed this job a few months after the flag came up on March 7, 2014.

The eldest of four siblings, he started doing odd jobs soon after completing his Class XII, because his father, a daily wage worker, was finding it difficult to support the family. But he managed to complete his graduation in between jobs. Two years ago, he shifted to Delhi with his parents and three siblings — two sisters and a brother — in search of a better life. They now stay in a colony in Anand Vihar, East Delhi.

“I applied for many government jobs and appeared in several competitive exams, but never got a job. Today, when I hear about the Vyapam scam in Madhya Pradesh, I console myself thinking that maybe I did qualify, but…,” he says.
He spends 12 hours in the park — from 8 am to 8 pm. A day off would mean a deduction of Rs 300 from his monthly salary.

“I’m still applying for government jobs. There are opportunities here (Delhi). But that’s only if I get lucky,” he says. Just then, a group of youngsters catches his attention. He leaves his food and walks up to the flag post. After a while, Ram Avatar returns and the young men move away from the flag.

“They were asking me why the flag is not fluttering. I told them that it’s because there is no wind at the moment. They advised me to install a fan on the top of the flag pole so that the flag can keep flying,” he says with a chuckle.

“I have been guarding the flag for almost a year, but I have never had to take anyone to the police post outside the park. Earlier, there was no railing around the flag and love-struck couples would scribble their hearts on the pole. Now a railing has been installed so that people don’t get too close to the pole and deface it,” he says.

As dusk falls and the eight 1,000-watt bulbs switch on to light up the flag, there is a sudden rush of visitors into the park. Young and old, Indians and foreign tourists, all throng the park, the flashes from their phones lighting up the space.

As the crowd swells, Ram Avatar is on his toes. “This place is sensitive. You have a Metro station underneath you, a sprawling market around. Besides, this park is always brimming with people. So, one has to be extra careful here,” he says.

Around 7 pm, as entry to the park is shut, it’s time for Ram Avatar to call it a day. His night-shift colleague will arrive anytime now and he will head home, where food, books and TV is waiting for him.

“There is a lot of talk about nationalism nowadays on TV. I don’t know much about what happened in JNU. Only that some students shouted anti-national slogans,” he says. “You know, I see a lot of people here. If spending time with a flag makes you a patriot, I will be the biggest of them since I spend the entire day under the shadow of the tricolour,” he says as he hurriedly crosses the street to board the Metro to Anand Vihar.

Making a difference: This adventure club gets its kick out of rescuing people