Weather forecast Today Highlights: A low pressure area along with active monsoon is going to occur in parts of India such as Northeast, east central and peninsular regions. Southwest monsoon has advanced over these regions. 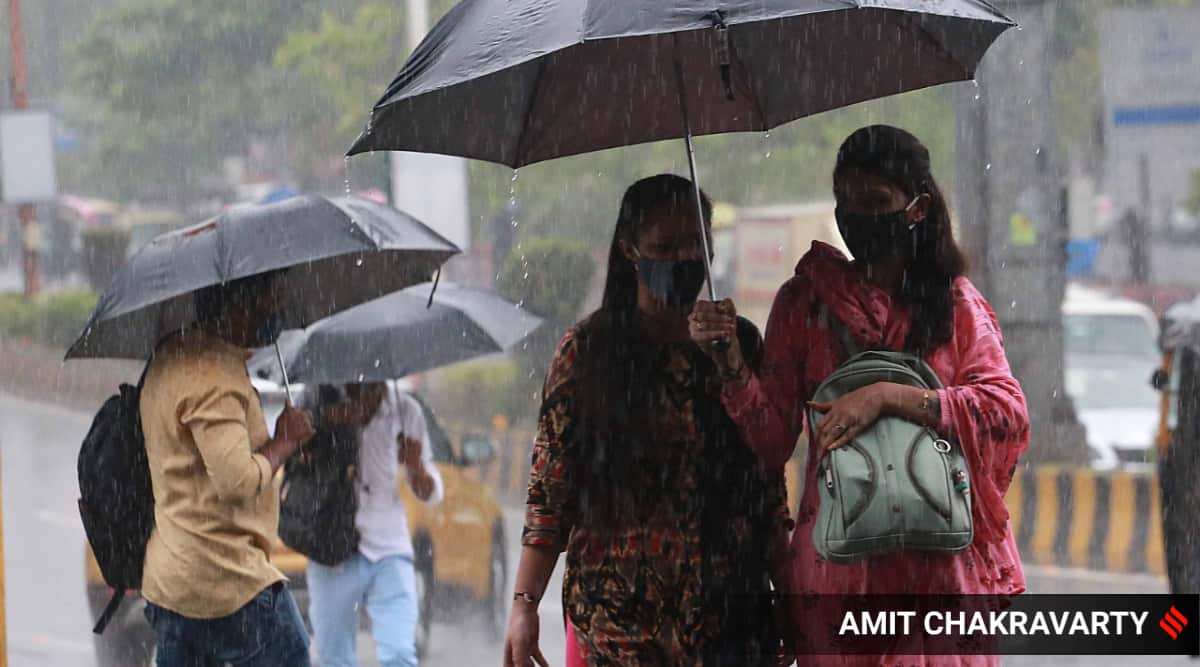 Five districts recorded large excess rainfall, with Jalna and Parbhani districts of Marathwada are among the wettest in the state, with over 60 per cent above normal rainfall this June (Representational Image)

Weather forecast Today Live Highlights: Nineteenth session of the South Asian Climate Outlook Forum (SASCOF-19) conducted online had predicted normal to above normal rainfall in South Asia. Heavy rainfaill has been predicted over the northwest and region along the foothills of Himalaya.

Southwest monsoon is expected to intensify in north India. IMD along with ICMR is trying to reduce the transmission of malaria in Odisha. Odisha, in 2020, witnessed 1,81,831 cases and 63 deaths.

Light shower is expected in national capital, as southwest monsoon is going to intensify in Delhi in few hours. The expected date for monsoon in Delhi in June 27.

IMD had shared a low-pressure area and cyclonic circulation over northwest Bay of Bengal, an east-west trough running from south Punjab to the centre of the low-pressure area over northwest Bay of Bengal, strong south-westerly winds along the west coast, and an off-shore trough near the west coast signify that monsoon will arrive Delhi a few weeks early.

North Goa and old Goa experienced heavy rainfall on Monday. IMD says it will rain more than 204.4 mm on June 15, as rain-bearing clouds are approaching the state from Arabian Sea.

The monsoon in west has shifted to south Konkan region. IMD notified that the red alert for Mumbai, Palghar and Thane, turned green, as the rainfall reduced.

In Odisha, Puri received 52.8 mm rainfall, Cuttack district 44.2 mm till 8.30 am on Monday and Bhubaneswar recorded 11.4 mm rain. The Met centre has forecast light to moderate rain in Odisha.

Monsoon has covered entire Odisha, West Bengal, Jharkhand, Bihar, Jammu and Kashmir, Ladakh, Gilgit-Baltistan and Muzaffarabad and some parts of Haryana, Chandigarh and northern Punjab. Follow this space for the latest weather updates.

The maximum temperature is expected to hover around 36 degrees Celsius.

The MeT office said the relative humidity recorded in the city at 8.30 am was 65 percent.

"Westerlies winds have slowed down the progress of the monsoon in northwest India. It is not likely to hit Delhi in the next two days," an India Meteorological Department (IMD) official had said on Monday.

It was earlier predicted that the monsoon may reach Delhi by June 15, 12 days early. (PTI)

Coastal and interiors of south Karnataka have been put on red alert according to the India Meteorological Department (IMD) after these areas experienced widespread rainfall due to active monsoon.

IMD Bengaluru Centre Head CS Patil said low pressure had developed over Jharkhand and its neighbourhoods, while a trough ran from East Central Arabian Sea to south Konkan. There was another low-pressure zone near the Karnataka coast. Due to its influence, heavy rainfall has been predicted in coastal areas.

Bengaluru city is expected to experience light to moderate rainfall for the next two days.

Heavy rain lashed most parts of Goa on Monday with Old Goa and the northernmost taluka of Pernem receiving very heavy rain throughout the day.

According to the India Meteorological Department’s (IMD) Meteorological Centre at Goa, there was a warning of likely extremely heavy rainfall – more than 204.4 mm in 24 hours – on Tuesday as well. The IMD has also predicted heavy rainfall in the state until Friday in both North and South Goa.

Parts of Panaji saw traffic diversions and water-logging Monday. The cumulative rainfall received until 8:30 pm was 113.5 mm in Old Goa, 98 mm in Panaji and 97 mm in Pernem. According to the IMD’s forecast on Monday evening, rain would very likely be accompanied by a wind of 30-40 kmph and intense short spells are very likely.  Read More

More rainfall and thunderstorms are expected from the early morning hours of June 15 to 16, with light to moderate rainfall (1-5 cm) at most places and heavy to very heavy rainfall (7-12 cm) at isolated places likely during this period, states IMD Chandigarh.

Light to moderate rain (1-3 cm) at many places with isolated heavy rain (6-7 cm) likely to continue over Punjab, Haryana including Chandigarh during the next 48 hours. Isolated thunderstorms with lightning and gusty winds (30-50 kmph) also likely during this period. (ANI)

Car swallowed up by sinkhole in Mumbai

As heavy rainfall continues in Mumbai, a video of a parked car suddenly being swallowed up by a sinkhole has taken social media by storm. The incident took place in the parking lot of a residential complex in Mumbai’s Ghatkopar area, the ANI reported.

In the video going viral, a black car was seen sinking into the ground rapidly and then quickly disappearing into a pool of muddy waters. Even as the car, which appeared to be a hatchback, was swallowed up, two other vehicles parked near it were not affected. Read full report

Rain lashes several parts of Kochi. India Meteorological Department has predicted 'generally cloudy sky with a few spells of rain or thundershowers' for the next four days in the city.

India Meteorological Department has predicted 'generally cloudy sky with a few spells of rain or thundershowers' for the next four days in the city. pic.twitter.com/Bymt4x7sRx

No space for hate crime… if it is there, it has to be rooted out: SC
Adani-Hindenburg fallout: What you need to know today
Over 37, 000 victims of chit fund scams get Rs 30 crore back in Chhattisgarh
With eviction drive, BJP has turned Jammu and Kashmir into Afghanistan, s...
LCA Navy makes maiden landing on indigenous aircraft carrier INS Vikrant
More from India >>
Conditions favourable for monsoon to advance into Delhi, Punjab and other states in next 48 hours: IMD

Conditions are favourable for further advancement of southwest monsoon into most parts Madhya Pradesh, remaining parts of east Uttar Pradesh, Delhi and some more parts of west Uttar Pradesh, Haryana, and Punjab during next 48 hours, states IMD.

♦ Conditions are favorable for further advance of southwest monsoon into most parts Madhya Pradesh; remaining parts of east Uttar Pradesh; Delhi; some more parts of west Uttar Pradesh, Haryana, and Punjab during next 48 hours.@rajeevan61 @moesgoi pic.twitter.com/TlZSwYwKAU

IMD update on progress of monsoon

Waterlogging reported from several areas of Prayagraj following rainfall. IMD has forecast “generally cloudy sky with one or two spells of rain or thundershowers” for next four days in the city. (ANI)

IMD has forecasted 'generally cloudy sky with one or two spells of rain or thundershowers' for next four days in the city. pic.twitter.com/ValvITZALh

Monsoon covers nearly 80% of country’s area, expected to arrive in Delhi in 2-3 days

Continuing its rapid progress since its onset on June 3, the southwest monsoon on Sunday has now covered nearly 80 per cent of the geographical area of the country within 10 days.

The India Meteorological Department (IMD) on Sunday afternoon said that the monsoon has reached the doorstep of Delhi, where it is most likely to arrive during the next two to three days. The normal dates for the onset of monsoon over Chandigarh and Delhi are June 26 and June 27 respectively.

By Sunday, the monsoon has covered the entire Odisha, West Bengal, Jharkhand, Bihar, Jammu and Kashmir, Ladakh, Gilgit-Baltistan and Muzaffarabad and some parts of Haryana, Chandigarh and northern Punjab, covering nearly 80 per cent of the country’s geographical area. Read full report

Mercury may dip as light showers expected in Delhi on Sunday

With monsoon expected to arrive around June 15 in the city, the IMD expects cloudy skies and light showers till Thursday.

Mercury is expected to dip further due to the rain. On Monday, the maximum is likely to be 34 degrees Celsius, which will further go down to 33 degrees on Tuesday and Wednesday. Read More

Rains lashed several parts of Punjab and Haryana on Sunday morning, and more showers are expected in the region over the next two days, the meteorological department said here.

It said downpour was recorded at several places in the twin states between 5.30 pm on Saturday and 8.30 am on Sunday.

The Union Territory of Chandigarh, which is the common capital of Punjab and Haryana, received 20.6 mm rainfall, while its adjoining areas, including Mohali and Panchkula, also received showers, the weather office said.

According to the weather office forecast, light to moderate rain and thundershowers are likely in many parts of Haryana and Punjab on June 14 and 15. (PTI)

Moderate rainfall in Haryana, in next few hours

Rain brings respite to people from heat in Jammu

A spell of early morning rain on Sunday provided relief to the people from scorching heat in Jammu, where the minimum temperature plummeted five notches below the season’s average to settle at 20.6 degrees Celsius.

The rains started in the city around 1.50 am and continued for six hours, bringing much needed change in the weather conditions. (PTI)

Overcast conditions are likely to prevail over Pune from the afternoon of Sunday, the India Meteorological Department (IMD) has said.

According to India Meteorological Department Konkan and Goa can expect higher intensity rainfall on June 13 and June 14.

Some other states with the same forecast are Odisha, Chhattisgarh, West Bengal & Sikkim, Jharkhand, Madhya Pradesh, Vidharbha and Telangana.

Isolated heavy falls are predicted over Bihar, Uttar Pradesh and Uttarakhand, as per IMD. Heavy rainfall will also to take place in northwest India excluding Rajasthan on June 13.

Heavy rains lashed Mumbai and its suburbs on Wednesday, leading to traffic snarls and severe waterlogging that left roads, subways, suburban rail tracks and entire neighbourhoods inundated. The southwest monsoon arrived in the city with a bang, while the MeT department issued an alert for more downpour. The southwest monsoon has arrived two days ahead of its normal date.

Meanwhile, a red alert was sounded in the Raigad district of Maharashtra, where extremely heavy showers are likely to continue till Friday. Since there is a risk of landslides due to heavy rains, 1,139 people from 20 villages have been shifted to safer places, PTI reported.

In view of the IMD's warning about heavy to extremely heavy rainfall in the Konkan region of Maharashtra between June 11 and 15, the state government on Wednesday requested the National Disaster Response Force (NDRF) to send 12 teams to five coastal districts. The State Disaster Management Authority of the state government requested the Commandant of the NDRF to depute the teams in Thane, Raigad, Palghar, Ratnagiri and Sindhudurg districts by June 10 afternoon.

The India Meteorogical Department issued a red alert for Mumbai, Thane, Palghar, and Raigad, which signifies a possibility of 'Very heavy to extremely heavy rain at isolated places'.

With the Brihanmumbai Municipal Corporation (BMC) once again caught on the wrong foot, despite several assurances, officials decided to shut the key Andheri subway, which was among the first to get inundated, for four months across the entire season.