An Air India flight carrying Indians from UAE landed at Chennai International Airport in the early hours of Saturday. Earlier, air India Express flight IX 474, carrying 182 passengers, including 25 children and five infants, from Bahrain landed at Cochin International Airport on Friday, the second day of the Vande Bharat evacuation mission. This is the fourth rescue flight that has landed in India today. Earlier in the day, Air India flight AI 381 carrying 234 passengers landed in New Delhi from Singapore just before noon, an AI 1242 flight from Dhaka in Bangladesh touched down in Srinagar at 2 pm, and the third flight from Riyadh landed in Kerala’s Kozhikode at around 8.10 pm.

Nearly 700 Indian nationals stranded in the Maldives on Thursday set sail on INS Jalashwa as part of the Operation Samudra Setu of the Indian Navy to rescue citizens amid the coronavirus pandemic. 19 pregnant women and 14 children are among the passengers on the ship.

India’s repatriation exercise began on Thursday, with two flights landing in Kerala. An Air India flight from Abu Dhabi landed at Cochin International Airport at around 10 pm, half an hour before another landed at Kozhikode airport from Dubai. Together, there they brought home over 400 passengers.

Through the Vande Bharat Mission, India will send 64 flights and three Navy ships to repatriate Indians stranded abroad due to the coronavirus pandemic. Nearly 15,000 Indians are expected to return home over the next week.

Indians from UAE land in Chennai

A flight from United Arab Emirates' Dubai, with around 180 Indian nationals including three children, arrived at Chennai International Airport today. All passengers were being screened and tested. They would be placed under quarantine.

Tamil Nadu: A special flight from United Arab Emirates (UAE)'s Dubai, with around 182 Indian nationals - including 3 children, arrived at Chennai International Airport tonight.
All passengers are being screened & tested. They'll be placed under quarantine, as per the guidelines. pic.twitter.com/igd3O3lsln

Air India Express IX 540 left Dubai for Chennai with 177 passengers on board while previous flight IX 612 left with 179 passengers to Chennai.

Air India Express IX 540 left Dubai for Chennai with 177 passengers on board while previous flight IX 612 left with 179 passengers to Chennai. Wish them happy journey.Thanks Dubai for all the support. #VandeBharatMission @MEAIndia @IndembAbuDhabi @airindiain @DrSJaishankar pic.twitter.com/IoiBtICtnX 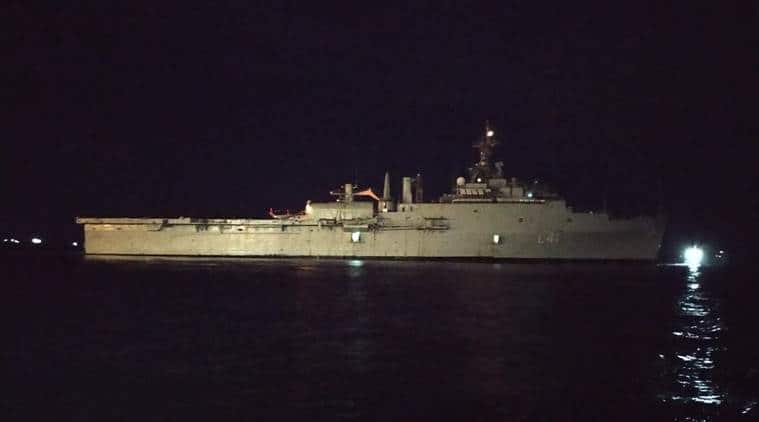 The Air India flight from Riyadh to Karipur airport in Kerala's Kozhikode district had onboard 153 passengers, including 84 pregnant women and 22 children. According to a PTI report, 10 passengers are from neighbouring states Karnataka and Tamil Nadu, and took the flight to return to India.Kerala is expecting another flight from Bahrain at 11.30 pm, which will land at Kochi airport.

We're also tracking the latest news on the coronavirus outbreak in this live blog. For all news and updates on the situation in India, don't forget to click the link. India has reported 56,342 cases of coronavirus, including 37,916 active cases, 1,886 deaths and 16,539 persons who have recovered. Sheoran, 31, successfully steered the Air India Express (AIE) flight from Abu Dhabi to Kochi, the first of many repatriation flights India is undertaking to bring home its stranded nationals as part of the Vande Bharat mission. Vishnu Varma speaks to him to find out more about his experience. 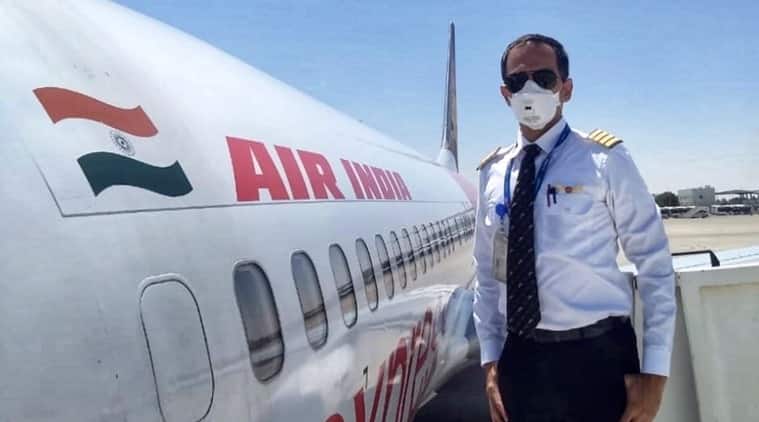 An Air India flight from Riyadh, Saudi Arabia has landed at the Kozhikode airport with 152 passengers on board. They will undergo medical screening, and will be quarantined at a government centre. This is the third flight to land in India today as part of the government's Vande Bharat mission.

Phase 2 of Vande Bharat mission could see flights to Russia, Germany and Thailand

According to a PTI report, the Vande Bharat mission will expand to more countries after May 15. These countries could include Kazakhstan, Uzbekistan, Russia, Germany, Spain and Thailand, government sources told the agency. In the second phase, Indian nationals stranded in Asian and European countries could be brought back.

In a press release, IndiGo said it has operated two special flights to help Kenyan citizens reach Mumbai to board a flight to Nairobi. One flight operated on the Delhi-Ahmedabad-Mumbai route, and the other Chennai-Bangalore-Hyderabad-Mumbai. At least 197 stranded Kenyan citizens were helped in the process. The charter was initiated by the Kenya Embassy.

“We are pleased to contribute in the evacuation efforts for Kenyan nationals from across the country to Mumbai, from where they were flown to Nairobi by Kenyan Airways. The Charter was initiated in coordination with the Kenyan consulate and the Indian government, to help the citizens reach the Mumbai airport from various cities including Delhi, Ahmedabad, Chennai, Bengaluru and Hyderabad," Ronojoy Dutta, Chief Executive Officer, IndiGo said.

The Health Ministry has issued additional guidelines for facility quarantine / isolation of returnees from abroad, their contacts, and isolation of suspects or confirmed cases in private facilities like hotels, service apartments, lodges etc.

Check in completed, 177 passengers to fly to Kochi from Bahrain

Check in completed at Baharain airport.177 passengers with 5 infants will to fly to Kochi by Air India Express flight IX 474

Two flights from Dubai will land in Chennai today

Passengers have started arriving for third and fourth repatriation flights from Dubai to Chennai leaving today evening as part of the government's evacuation exercise.

The third repatriation flight bringing Indians stranded in Bahrain will leave from the Manama International airport to reach Kochi today.

Few hours away from reaching back home, passengers of the first #AirIndia flight from Bahrain to Kochi under #VandeBharatMission at Bahrain International Airport. @IndianDiplomacy @MEAIndia @PMOIndia @MoHFW_INDIA @airindiain pic.twitter.com/Zizr4gsEeT

An Inter-ministerial coordination committee has been formed for implementing SOP for evacuation of stranded people to and from India during the lockdown, the Ministry of Home Affairs said Friday.

Officials check the temperature of Indian nationals at the Riyadh airport. Around 150 passengers, several of whom lost their jobs, are on the Air India flight that will land in Kerala.

Indian nationals board INS Jalashwa in Male, Maldives as part of Operation Samudra Setu. The ship will sail to Kochi in Kerala with at least 732 Indians, including 19 pregnant women and 14 children. The government will for the first time charge Indian nationals who are being evacuated by Indian Navy ships. Earlier evacuation operations by the Navy were not charged to the passengers.

Watch | Indian nationals board INS Jalashwa in Male, Maldives as part of Operation Samudra Setu. The ship will sail to Kochi in Kerala

The repatriation flight to Manama in Bahrain took off from Thiruvananthapuram at 1 pm. The IX-474 flight will land in Kochi at 11.30 pm.

Indians in Riyadh, Saudi Arabia in queue to board Air India flight A flight is scheduled to land in Kozhikode in Kerala at 8.30 pm. Here are some pictures and videos of passengers getting ready to board the flight at Riyadh in Saudi Arabia. Around 150 passengers will be brought back, most of whom are workers who have lost their jobs due to the pandemic and pregnant women. (Photo source: Indian Embassy, Riyadh)

Meanwhile, pregnant women, the elderly, children below 10 and the indisposed have been allowed to travel to their homes, where they will have to stay under strict home quarantine. There were around 60 pregnant women in the first two flights.

Airport authorities said baggage will be handed over to passengers only after strict disinfection procedures – a spray of sodium hypochlorite, followed by exposure to ultraviolet rays by passing the luggage through two tunnels. The ultraviolet disinfection system, developed by DRDO, was recently installed at Kochi airport.

Earlier in the day, state Health Minister K K Shailaja said there are only 25 active coronavirus cases in the state, with three people from Kannur and two from Kasaragod districts being declared free of the virus.

According to the Health Department, the number of hotspots have come down from a high of 100-odd two weeks ago to 33. On Thursday alone, 56 local bodies were dropped from the list of hotspots.

Meanwhile, a day after the Indian government’s announcement to repatriate Indians stranded in 12 countries, the website of the Ministry of Civil Aviation (MOCA) crashed on Wednesday afternoon.

“The MOCA website is down due to unprecedented traffic. Team NIC (National Informatics Centre) is working on it. Details regarding evacuation flights will be put up on the Air India website soon. Kindly check there directly. Our apologies for the inconvenience caused,” the ministry said on Twitter at 12.22 PM on Wednesday.

Over 4,000 stranded foreigners were helped through the ‘Stranded in India’ portal launched by the Ministry of Tourism a few days after the lockdown was announced in March, a senior official told The Indian Express.

However, sources said, there are many others who are still stranded in various parts of the country. According to the Ministry of Tourism, “Around a thousand international visitors are confined to their hotel rooms since they could not afford the rescue flights, which were quite expensive.”