Akbaruddin drew Muhammad-Bande's attention to the long-pending global convention on international terrorism and called for action in the UN body to adopt it, emphasising that terrorism is “antithetical” to everything that the UN stands for. 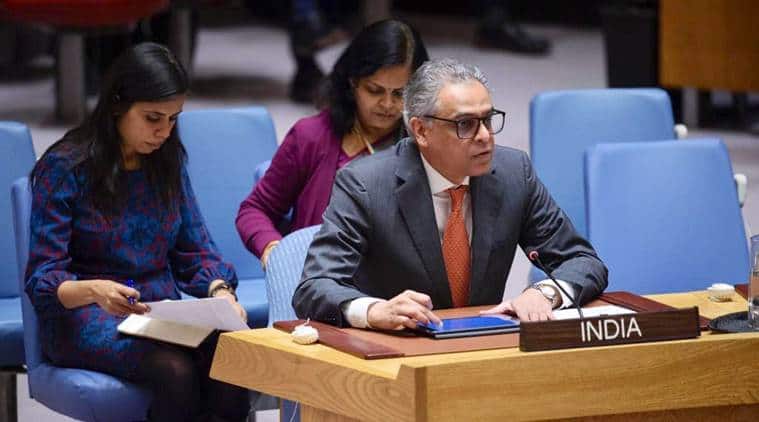 During the interactive dialogue, Akbaruddin highlighted that in his vision statement, Muhammad-Bande spoke about the issue of terrorism. (Twitter/@AkbaruddinIndia)

India has expressed support to Nigeria’s Ambassador to the UN Tijjani Muhammad-Bande as the next president of the General Assembly and called him to make the body more “action-oriented” to deal with the global scourge of terrorism.

The current President of the General Assembly Maria Fernanda Espinosa presided Monday over an informal interactive dialogue with Muhammad-Bande, nominated by Nigeria, where the Member States got an opportunity to discuss his vision statement and question him on his priorities and plans if elected as President of the 74th session of the 193-member General Assembly.

The dialogue aims to contribute to the transparency and inclusivity of the selection process. India expressed support for the Nigerian Ambassador, describing him a “great friend” and a “well-known son of Africa”, with Permanent Representative to the UN Ambassador Syed Akbaruddin tweeting that India is looking forward to Muhammad-Bande’s election by acclamation on June 4. “India joins in support of this effort,” he said.

During the interactive dialogue, Akbaruddin highlighted that in his vision statement, Muhammad-Bande spoke about the issue of terrorism.

Akbaruddin drew Muhammad-Bande’s attention to the long-pending global convention on international terrorism and called for action in the UN body to adopt it, emphasising that terrorism is “antithetical” to everything that the UN stands for.

“Terrorism is antithetical to everything that we here at the UN stand for. It is antithetical to peace and security, to development and to human rights. Yet all of us seem contented only to condemn terrorism and not do anything more,” Akbaruddin said, underlining the need for the General Assembly to be more “action-oriented rather than talk-oriented.”

The Indian Ambassador asked his Nigerian counterpart what plans he has to make the General Assembly more “action-oriented” to deal with the global scourge of terrorism.

“I’d like to draw his attention to the Comprehensive Convention on International Terrorism (CCIT). This is being lying with the General Assembly for years, in fact for decades. Would we see any initiative by him on this important issue,” Akbaruddin said.

India proposed a draft document on the Comprehensive Convention on International Terrorism (CCIT) at the UN in 1986 but it has not been implemented as there is no unanimity on the definition of terrorism among the member states.

The Nigerian diplomat replied that “there is nothing as urgent as dealing with terrorism because what it has done, like my friend Syed stated, it goes completely contrary, counter to all that this organization stands for.”  He stressed the necessity for the international community to really work as one, not only as UN but as Member States to see “why we have to really continue to collaborate very deeply with others in dealing with this matter.”

Muhammad-Bande said the UN has many mechanisms and has created a whole office – the United Nations Office of Counter-Terrorism – to focus efforts on countering terrorism. He added that sometimes nations are not able to find “means of communicating” on the issue because often the traditions of different countries stand in the way “in a matter that is so urgent and everyday affects countries regardless of region, size or economic circumstance.”

He stressed that the office of the PGA will support the Secretary-General by getting Heads of State and Government to really appreciate deeper the need and importance of sharing information and the issue of efforts to deal with education relating to countering extremism.

With little headway in any action to adopt the CCIT, India is reviving discussion on the Convention at the world organisation amidst increasing terror attacks on places of worship across the globe. Earlier this month, India had given a clarion call at the UN for strengthening efforts to adopt the long-pending global convention on international terrorism.

India’s call to adopt the CCIT came just a day after it won a massive victory in the fight against terrorism with the designation of Jaish-e-Mohammad chief Masood Azhar as a global terrorist under the 1267 Al Qaeda Sanctions Committee of the UN Security Council. The blacklisting of the JeM chief came 10 years after India first moved a proposal in the UN body to sanction him.

Speaking at a solemn commemorative event for victims of the Easter Sunday attacks in Sri Lanka, Akbaruddin had said that as a tribute to the victims in Sri Lanka, “we can all try and strengthen efforts to achieve that objective of a putting in place a global legal framework to counter a global scourge.”