India ‘dismayed’ as Maldives extends state of emergency by 30 days

The ministry of external affairs said the manner in which the extension was approved by the Majlis — Maldivian Parliament — is a “matter of concern”. 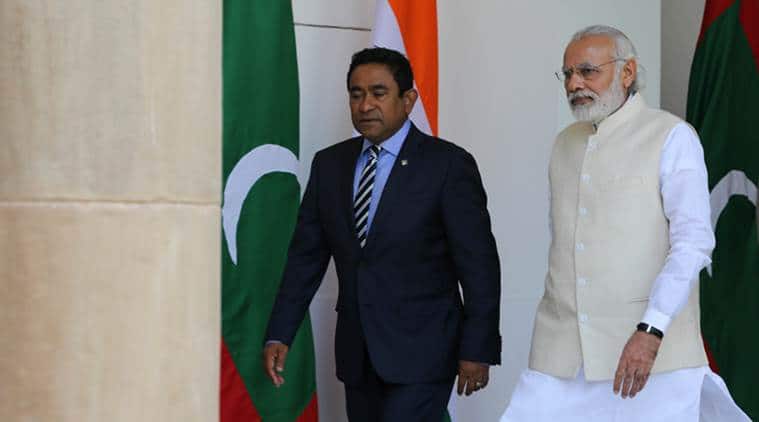 Hours after Mishra met Sareer, the ministry of external affairs in New Delhi said the manner in which the extension was approved by the Majlis — Maldivian Parliament — is a “matter of concern”. This was their second such meeting since the island nation imposed emergency on February 5.

On their February 16 meeting, when Mishra had asked Sareer about his government’s intention of ending the emergency, Sareer assured that the Yameen government’s “intention” has been to end the emergency at the earliest.

However, on February 20, they extended the state of emergency.

What has disappointed New Delhi is that India had urged the Yameen government on February 20 — hours before the Majlis approved the extension — not extend the emergency so that the country could “quickly returns” to the path of democracy.

“The consequent delay in the resumption of the political process and the continuing suspension of the functioning of democratic institutions, including the judiciary is likely to further delay restoration of normalcy in Maldives,” it said. “It is important to ensure that all democratic institutions are allowed to function in a fair and transparent manner in accordance with the Constitution,” the statement said.

In a bid to assuage the concerns of the international community, Male reiterated “unwavering” commitment to ensure the safety and security of foreign nationals residing in the country, as well as those visiting the Maldives on vacation.

Meanwhile, the Maldives Opposition said Yameen had failed to gain the constitutionally-mandated quorum in parliament to vote on the state of emergency decree, declaring its extension “illegal”.

The Maldives government, however, said there quest for extension was based on the advise of the National Security Council and the decision by the Parliament to extend the State of Emergency was warranted due to the threats posed to national security.