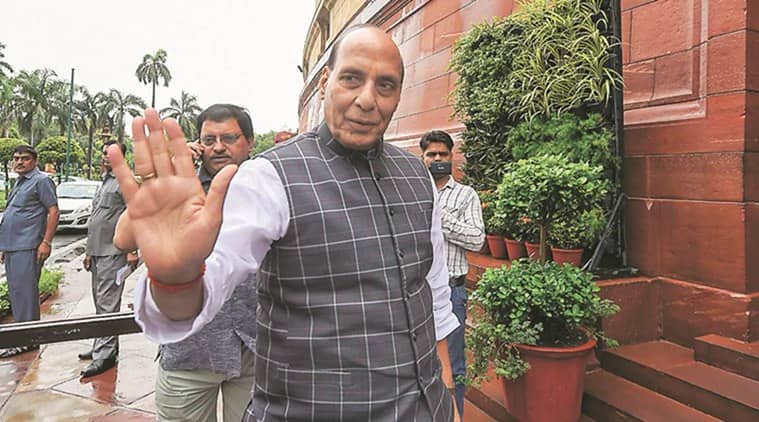 Rajnath Singh was informed that the “preparedness of all forces is already high”. (File Photo)

Following the violent border face-off with China on June 15 that left 20 Indian soldiers dead, Defence Minister Rajnath Singh told the military top brass during a review meeting Sunday that the government has given the forces freedom to “give a befitting reply” if there is further escalation from the other side, sources said.

The meeting, they said, also discussed the existing protocol around the use of firearms and ways to respond in changed situations. “India does not want escalation, but if there is any action from China, the forces have been given the freedom to give a befitting reply,” sources said about the discussions.

This was the key takeaway from the meeting between Singh and Chief of Defence Staff General Bipin Rawat, Army Chief General M M Naravane, Navy Chief Admiral Karambir Singh and Chief of Air Force Air Chief Marshal R K S Bhadauria to discuss the situation in eastern Ladakh and along the entire 3,488-km boundary with China.

Sources said the top brass were told that the government has faith in their competence to handle any situation, and that military commanders on the ground “are the best judge of the situation”.

While Singh was informed that the “preparedness of all forces is already high”, sources said the government conveyed that the infrastructure build-up in eastern Ladakh, which China has reportedly objected to, will continue. The forces have also been asked to “be vigilant” on land, at sea and in air.

The meeting came a day before the Defence Minister leaves for Russia to attend the 75th Victory Day Parade in Moscow.

On June 19, Singh had reiterated Prime Minister Narendra Modi’s line at the all-party meet on the border situation that “the forces have been given complete freedom to take necessary action”.

On Saturday, a statement issued by the Prime Minister’s Office had said that the all-party meet was “informed that this time, Chinese forces have come in much larger strength to the LAC and that the Indian response is commensurate”.

Mirroring the build-up by China, India too has moved forward troops and augmented its military strength along the boundary with China in all sectors.

Following the face-off, Singh has been conducting regular briefings with the military leadership. During one meeting on June 17, he had asked the forces to be alert and “prepare for any situation all along the border with China, not restricted to just Ladakh”.

Returning to the city