When contacted by The Indian Express, DGCA chief Arun Kumar confirmed receiving a letter from the Afghanistan government, and said the Ministry of Civil Aviation will take a call on the matter as it was a policy issue. 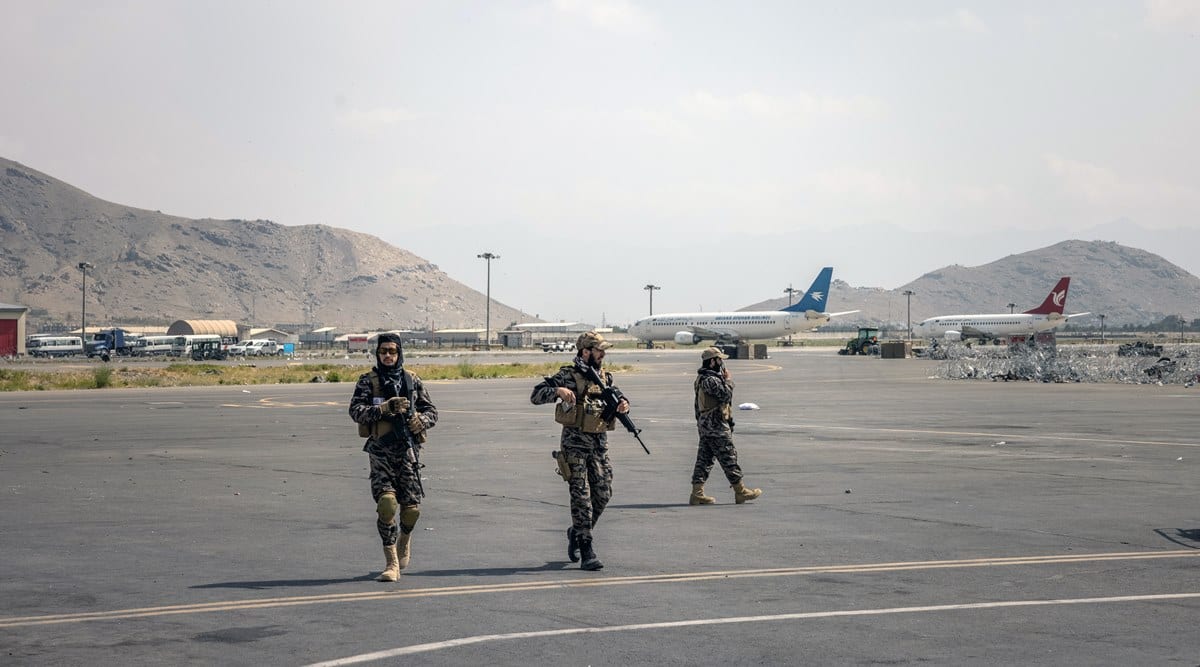 Members of the Taliban at the Kabul airport on August 31, 2021. (The New York Times: Jim Huylebroek)

The Afghanistan Civil Aviation Authority under the new Taliban regime has written to India’s Directorate General of Civil Aviation (DGCA) seeking resumption of flights operated by its airlines Kam Air and Ariana Afghan Airline to and from Delhi. When contacted by The Indian Express, DGCA chief Arun Kumar confirmed receiving the letter, and said the Ministry of Civil Aviation will take a call on the matter as this was a policy issue.

The Afghanistan airspace was declared ‘uncontrolled’ and was effectively closed for civilian flights on August 16 following the Taliban takeover of Kabul. Since then, the Taliban government, with the help of Qatar, has managed to resume several airports in the country, including at Kabul.

Ariana Afghan Airline has already been operating domestic flights, and the first international commercial flight post the takeover was operated between Islamabad and Kabul on September 13 by Pakistan International Airlines. Currently, regular international flights out of Kabul are being operated to Pakistan and Iran.

In the letter dated September 7 addressed to Kumar, Afghanistan’s Acting Minister for Civil Aviation and Transport Alhaj Hamidullah Akhundzada wrote: “The intention of this letter is to keep the smooth passenger movement between two countries based on the signed MoU and our national carriers (Ariana Afghan Airline and Kam Air) aimed to commence their scheduled flights. Therefore, Afghanistan Civil Aviation Authority requests you to facilitate their commercial flights.”

India yet to recognise Taliban govt

THE India-Afghanistan air transport mainly saw medical tourists, students and traders as passengers, and spices and dry fruits as cargo. A potential resumption of flights depends on India officially recognising the Taliban administration as the government of Afghanistan.

“The Civil Aviation of Islamic Emirate of Afghanistan avails its highest assurance,” he added. “As you are well informed that recently the Kabul Airport was damaged and dysfunctional by American troops before their withdrawal. By technical assistance of our Qatar Brother, the Airport became operational once again and a NOTAM in this regard issued on September 6,” Akhundzada wrote in the letter to DGCA.

Taliban soldiers stand in front of a sign at the international airport in Kabul, Afghanistan, September 9, 2021. (West Asia News Agency via Reuters)

Following the withdrawal of US troops, Kabul airport was at the centre of evacuation operations conducted by various countries, including India.

Prior to the Taliban takeover, India’s national carrier Air India and low-cost airline SpiceJet operated flights between Delhi and Kabul. While Air India operated its last scheduled flight to Kabul on August 15, SpiceJet had suspended its flights last year during the Covid-19 pandemic. These flights mainly flew medical tourists, students and traders as passengers, while carrying spices and dry fruits as cargo.