Former Reserve Bank of India (RBI) governor C Rangarajan observed that achieving the $5-trillion economy by 2025 is "simply out of question". Prime Minister Narendra Modi’s vision of making India a $5 trillion economy and a global economic powerhouse by 2024-25 was given a reality check by former Reserve Bank of India (RBI) governor C Rangarajan, who observed that achieving the target within the set deadline is “simply out of question”.

So what is the meaning of $5-trillion economy?

It basically means the size of an economy as measured by the annual gross domestic product or GDP. The GDP of an economy is the total monetary value of all goods and services produced in an economy within a year. At present, India is the sixth-largest economy in the world with $2.7 trillion economy. This, however, does not necessarily imply that Indians are the sixth-richest people on the planet. The GDP is the first and most rudimentary way to keep score among economies. If one wants to better understand the wellbeing of the people in an economy, one should look at GDP per capita. In other words, GDP divided by the total population. This gives a better sense of how an average resident of an economy might be fairing. 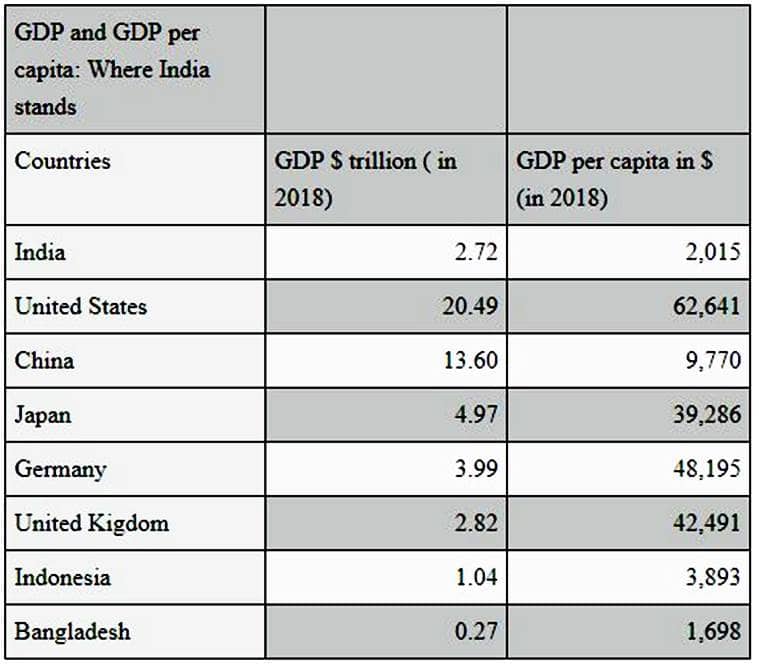 How is Modi govt planning to achieve $5-trillion economy?

While delivering a lecture on ‘Indian Economy: Challenges and Prospects’ at Columbia University’s School of International and Public Affairs in October, Finance Minister Nirmala Sitharaman had stated the making India a $5 trillion economy by 2024-25 is “challenging” but “realisable”. She also pointed out that more reforms are on the anvil before the end of the fiscal year.

She emphasised that the fixed investment rate needs to increase from 29 per cent to 36 per cent in the course of the next five years, with some depreciation of the rupee.

In a bid to give a fillip to the economy, which has hit over six-year low of 5 per cent, Sitharaman announced a slew of measures in three dosages which include a special window for real estate, export incentives, bank consolidation and sops for micro, small and medium enterprises (MSMEs) and the automobile sector.

What are Ex-RBI Governor observations on $5-trillion economy goal?

Claiming that India will need another 22 years of sustained growth to become a “developed country,” former Reserve Bank of India (RBI) governor C Rangarajan said on Thursday that at the current growth rate, India becoming a USD 5 trillion economy by 2025 is “simply out of question.”

“People are talking about USD 5 trillion economy. Today India’s economy is about USD 2.7 trillion and we are talking about doubling this. The required rate of growth of the economy to achieve the level of USD 5 trillion by 2025 is in excess of 9 percent per annum. Reaching USD 5 trillion by 2025 is simply out of question. You have lost two years. This year it is going to be six percent growth and next year also it will be probably about seven percent. Thereafter the economy may pick up,” said Rangarajan while delivering the 7th Yasaswy Memorial Lecture organised by IBS-ICFAI Business School on the topic, “The Current Economic Situation.”

“The interesting thing is, even if you reach USD 5 trillion, the per capita income in India will grow from the current level of USD 1800 to USD 3600. Even then, India will be called low-middle income country,” said the economist who was awarded the Padma Vibhushan in the year 2002.

Former prime minister Manmohan Singh had said that there was no hope of Modi government’s promise of $5-trillion economy becoming a reality if growth kept going down the way it has for the last five quarters. “The country today is in the midst of a dangerously protracted slowdown. And this is something which is not the statement being made only by the Congress party people but everywhere whether you talk to people in the industry, journalists — the common theme is that the economy is going from bad to worse,” Singh had said.

“The dangerous thing about the present situation is that the government is complacent enough to not realise that we are in the midst of a protracted economic slowdown,” the noted economist had stated. He said the size of the economy was USD 2.7 trillion in the current financial year and to reach USD 5 trillion economy by 2024, the country needs a growth rate of 12 per cent by the nominal terms and 9 per cent in real terms.

“If the economy is going the way it has been going down quarter after quarter, then there is no hope that the prime minister”s promise of a USD 5 trillion economy becoming reality,” Singh said.

Want to perfect your boxing moves? Farhan Akhtar shows us how