India Independence Day 2019 PM Modi Speech Highlights: In his first Independence Day address in NDA’s second term, Prime Minister Narendra Modi touched upon the achievements of his newly formed government in less than 10 weeks of coming to power — abrogation of Article 370, Article 35A, the passing of triple talaq Bill among others. He also said the decision to repeal Article 370 was a step towards fulfilling Sardar Vallabhbhai Patel’s dream

“We neither nurse problems nor keep them pending. What could not happen in 70 years happened in less than 70 days. The development of Jammu and Kashmir now depends on us. The spirit of ‘One nation, one Constitution’ is now a reality. Discussions should now be held on one nation one election.” He also slammed the Opposition for politicising the scrapping of special status to Jammu and Kashmir. “Politics comes and goes but steps in the interest of the nation are paramount. If Article 370 was so important and life-changing, why was it not made permanent.”

PM Modi also announced the launch of Jal Jeevan Mission to bring piped water to households and resolved to spend more than Rs 3.5 lakh crore in coming years. He also asked citizens to join the Jal Ministry in water conservation. In his speech, he also remembered the lives lost in the massive floods across multiple parts of India. He also paid homage to the sacrifices made by the freedom fighters in the struggle for independence.

Dressed in a white kurta-pyjama and a colourful turban, PM Modi was received by Defence Minister Rajnath Singh at Red Fort. He then inspected Guard of Honour and unfurled tricolour. Before coming to Red Fort, he paid homage to Mahatma Gandhi at Rajghat. A ceremonial parade was conducted on Thursday at the Naval Base here on the occasion of the nation's 73rd Independence Day. Vice Admiral A K Chawla, Flag Officer Commanding-in-Chief, Southern Naval Command, reviewed the parade, comprising 16 platoons including four armed platoons of 24 personnel each. He also laid a wreath in memory of the martyrs who had laid down their lives in the defence of the nation, at the SNC War Memorial, prior to the parade. (PTI)

Through his first Independence Day speech of his second term, Prime Minister Narendra Modi sought to frame his next five years as a journey to fulfil the aspirations of the people after having attended to their essential needs during the previous five years. Read more

Prime Minister Narendra Modi on Thursday gave a clarion call to farmers to gradually reduce use of chemical fertilisers and eventually stop their usage to protect soil health.

"Have we ever thought about the health of the mother earth? The way we are using chemical fertilisers and pesticides, we are destroying the earth," he said adding that no body has right to damage soil health. "I have a request for our farming community...We are going to celebrate 75 years of our Independence. Gandhi has shown us the path. Can we reduce the use of chemical fertilisers by 10 to 25 per cent in our farm lands," the prime minister said adding that a campaign should eventually start to stop their use completely.

Congress president Sonia Gandhi unfurled the national tricolour at the party headquarters here on the 73rd Independence Day on Thursday.

A group of children present on the occasion greeted Sonia Gandhi and Manmohan Singh who presented them sweets.

Sonia Gandhi hoists the tricolour at party office in Delhi 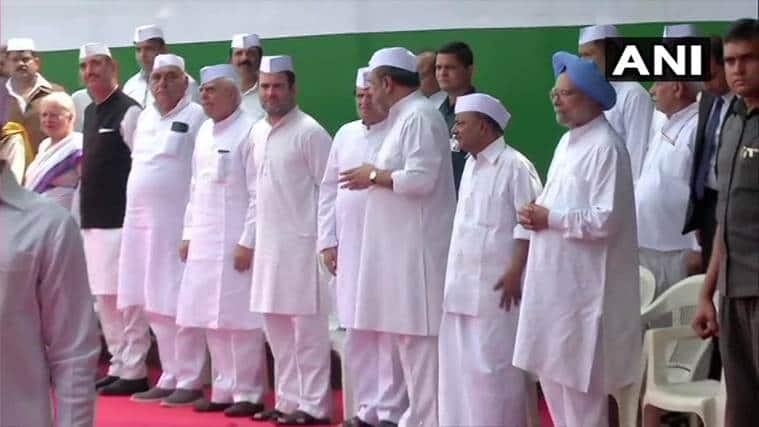 J&K Governor Satya Pal Malik, after hoisting the Tricolour, said, "The changes that the Central Government has brought are not only historic but also open a new door for the development of the people of Jammu-Kashmir, & Ladakh."

J&K Governor Satya Pal Malik hoisted the national tricolour at the Sher-e-Kashmir stadium here in the first Independence Day celebration in Jammu and Kashmir after the abrogation of its special status. After unfurling the flag, Malik inspected the parade of para-military forces and Jammu and Kashmir Police. Restrictions were put in place here in the wake of the abrogation of the special status under Article 370 of the Constitution. 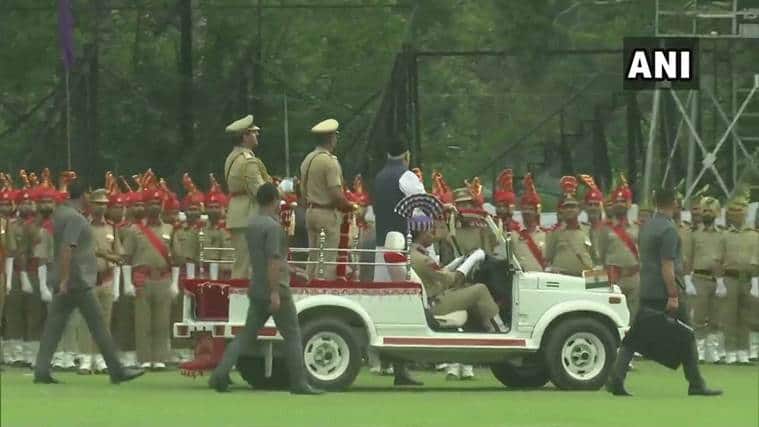 Prime Minister Narendra Modi on Thursday underlined the ‘achievements of his government within 10 weeks of returning to power’ and cited the revocation of Article 370 in Jammu and Kashmir and the new law on triple talaq to highlight the key decisions taken to ‘fulfill the aspirations of the people’. Read More 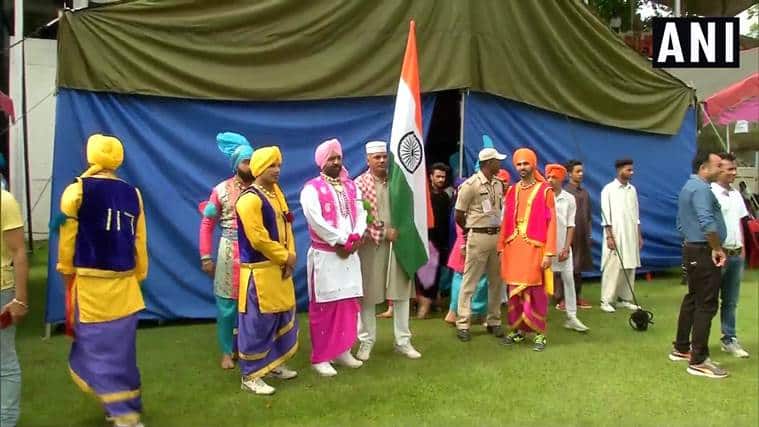 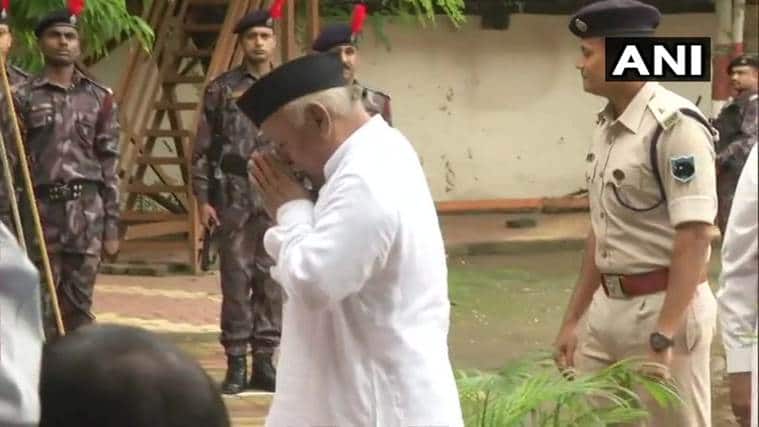 Prime Minister Narendra Modi on Thursday said his government will invest a massive Rs 100 lakh crore on developing modern infrastructure that will aid in nearly doubling the size of the Indian economy to USD 5 trillion in the next five years. Addressing the nation from the ramparts of the Red Fort here on the 73rd Independence Day, he said reforms will continue to be ushered in to help India break into top 50 countries on the 'ease of doing business' ranking. "To some the target of nearly doubling the size of Indian economy to USD 5 trillion in five years may seem difficult. But when we have in five years (of BJP rule) added USD 1 trillion as compared to USD 2 trillion size achieved in 70 years of independence, then this target is achievable," he said.

PM Modi I-Day top quotes: ‘We neither nurse problems nor keep them pending’

On India’s 73rd Independence Day, Prime Minister Narendra Modi said that the second NDA government has taken  several “pathbreaking” decisions, including abrogation of Article 370, end of Triple Talaq, steps for the welfare of farmers and traders. Addressing the nation from the Red Fort on Thursday, PM Modi said that the old arrangement in Jammu, Kashmir and Ladakh encouraged corruption and nepotism. Read top quotes from PM Modi's speech today

Can we think of visiting at least 15 tourist destinations across India before 2022: PM Modi

Talking about tourism in India, PM Modi says, "India has much to offer. I know people travel abroad for holidays but can we think of visiting at least 15 tourist destinations across India before 2022, when we mark 75 years of freedom."

Modi has used the annual event to announce the Centre's schemes and present a report card of his government's performance. (Express Photo by Amit Mehra/File)

Prime Minister Narendra Modi will deliver his sixth straight Independence day speech on Thursday. He is expected to touch upon a host of issues ranging from his government's landmark decision on Jammu and Kashmir to the state of economy. This will also be his first August 15 address after coming back to power with a huge mandate. In the past, Modi has used the annual event to announce the Centre's schemes and present a report card of his government's performance.

President, Ram Nath Kovind, also addressed the nation on the eve of Independence Day. Delivering his address, Kovind said the changes made in Jammu and Kashmir and Ladakh recently will enable the people to access and enjoy the same rights, same privileges and same facilities as their fellow citizens in the rest of the country.

The PM's speech is being telecast live on television as well as on the Internet. You can watch his speech as well as the proceedings from the Red Fort on TV Channels like Doordarshan, Lok Sabha TV, Rajya Sabha TV. Viewers can also watch the speech on the prime minister's personal website- narendramodi.in.