Independence Day 2018 Live: Prime Minister Narendra Modi addressed the nation on the occasion of 72nd Independence Day from the ramparts of the Red Fort. (Express Photo by Praveen Khanna)

During the address, he also announced his flagship health policy –Aayuhmaan Bharat from the Red Fort. The ambitious Ayushman Bharat or National Health Protection Scheme aims to cover over 10 crore vulnerable families (approximately 50 crore beneficiaries) and provide health cover up to Rs 5 lakh per family per year. The scheme will be rolled out on September 25, on the occasion of Deen Dayal Upadhyay’s anniversary. Referring to the torrential rainfall in Kerala, PM Modi said, “My thoughts are with the families of those who lost their lives due to floods in various parts of India.” Follow Kerala rain LIVE UPDATES

Modi began by congratulating the all-women INS Tarini team for circumnavigating the globe and paying tribute to freedom fighters and the martyrs of the Jallianwala Bagh massacre. He said the recently concluded monsoon session of Parliament focused on social justice. Taking a jibe at the UPA government, Modi also added that the pace of development fast-tracked in the past four years. Modi also announced the much demanded permanent commission for women in armed forces. So far women were given short service commission in Army, Navy and Air Force.

Punjab Chief Minister Amarinder Singh on Wednesday called for freedom from drug menace on the occasion of Independence Day. He launched a programme to take the war against narcotics to schools and colleges. The chief minister, who unfurled the tricolour in Ludhiana, also launched the second phase of the debt waiver scheme for farmers against loans taken from commercial banks, besides rolling out the 'Bhai Ghanayia Sehat Sewa Yojana', a health scheme, reports PTI.

In his speech after the march past, the chief minister called upon the people of Punjab to take a pledge to wipe out the menace of drugs.

On the occasion of Independence Day, Telangana Chief Minister K Chandrasekhar Rao on Wednesday launched three new schemes, including free life insurance for farmers. Rao unfurled the national flag at the historic Golconda Fort in Hyderabad. He also launched an eye care initiative aiming to cover all citizens in the state and an economic support programme for backward classes.

Prime Minister Narendra Modi took to poetry to highlight his vision of new India, on the occasion of Independence Day, saying "we are breaking chains" and are "determined to soar above the sky and build a new India". READ MORE Colourful fans handcrafted by tribal artisans offered relief to the dignitaries, including foreign diplomats and politicians, braving high humidity levels during the Independence Day function at the historic Red Fort. An overcast sky with high relative humidity was a perfect recipe for a typical sultry morning in the national capital. At 5.30 am, humidity was 72 per cent, the Met department said. It was 88 per cent a couple of hours ago. Prime Minister Narendra Modi was seen wiping his face with a handkerchief several times while delivering the Independence Day speech from the Red Fort.

Here are Independence Day pictures from the Red Fort 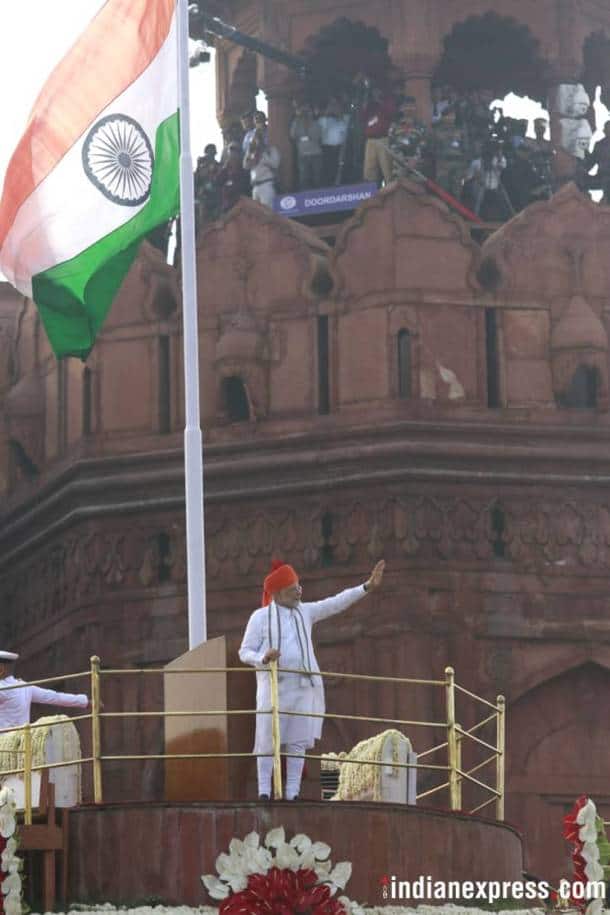 “Hum tod rahe hain zanjeerein, (We are breaking the shackles)

Hum badal rahe hain tasveerein, (We are shaping the picture)”

These two sentences at the fag end of his speech summed up the essence of Prime Minister Narendra Modi’s near 80-minute fifth Independence Day address from the ramparts of Red Fort today. In his characteristic style, Prime Minister Narendra Modi’s last speech from Red Fort before seeking a fresh mandate in 2019 sought to project that he has provided an assured stewardship of the leap of faith taken by the electorate in him in 2014.

As India celebrates 72nd Independence Day today, Prime Minister Narendra Modi addressed the nation from the ramparts of Red Fort for fifth and the last time as the Prime Minister. Wearing a saffron turban, Modi unfurled the Tricolour and said, ” We have to ensure social justice for all and create an India that is progressing rapidly.”  Here are keynotes from his speech

Gaganyaan’ will take an Indian in space by 2022, says PM Narendra Modi

Prime Minister Narendra Modi, in his Independence Day address from the ramparts of Red Fort on Wednesday, said the country will see an Indian on a space mission under an indigenous space project called ‘Gaganyaan‘ before 2022. This was Modi’s last Independence Day speech ahead of general elections and as PM in the current tenure. Modi said when India celebrates the 75th year of Independence in 2022, “and if possible even before, an Indian son or daughter” will undertake a manned space mission on board ‘Gaganyaan‘ “carrying the national flag”. READ MORE HERE 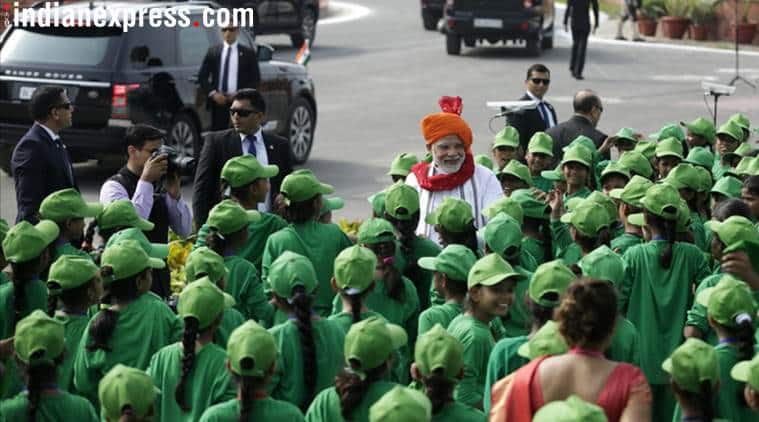 For much of the 78 minutes, the PM delivered a report card of the NDA government, recounting the achievements of flagship programmes. But what was, in essence, an election speech had soaring moments. First, was the promise to put an Indian man or woman in an Indian-made spacecraft into space. The final frontier can galvanise societies, and have them aspire to a positive, forward-looking nationalism. Second, through the speech, Modi maintained a focus on the rights of women, of their equal place in society. Third, he sought to present himself and his government as standing for the marginalised and the poor. But there were omissions too. While most communities, including Dalits, Adivasis and OBCs were mentioned, minorities were not (except in the context of Triple Talaq). While the PM spoke of rape and the deterrent effect of hangings and the general importance of the rule of law, there was no mention of the lynchings and floggings that have been a major blot on the law and order apparatus across many states. Read more 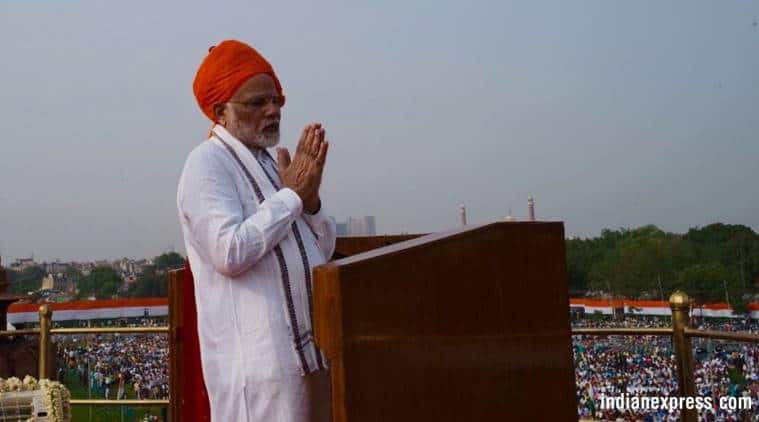 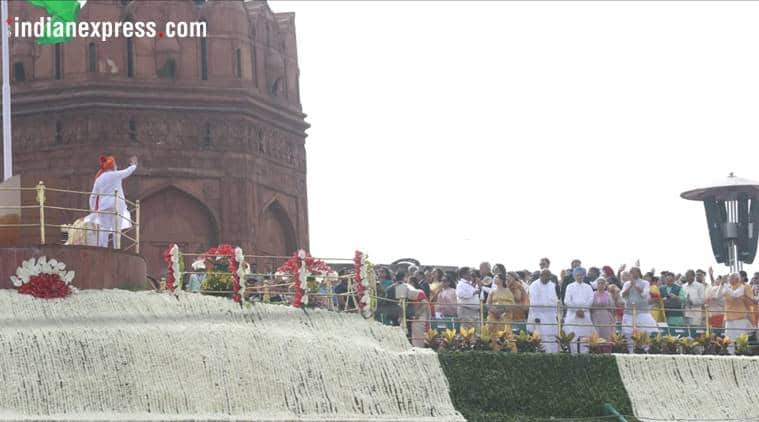 PM Modi aims to send an Indian to space by 2022

During his speech today, PM Modi announced that India will send an astronaut to space in the year 2022. “I make this announcement today, before 2022, an Indian astronaut – son or daughter – will be in space. One of us will carry the tricolor to the space to commemorate the 75th year of India’s Independence.” If India does launch the Gaganyaan mission, it will be the fourth nation to do so after the United States, Russia, and China.

Read | What is Gaganyaan?

Delivering his fifth Independence Day speech from the ramparts of the historic Red Fort in Delhi, Prime Minister Narendra Modi recounted the achievements of his government in the last four years. Emphasising that India has emerged as world’s sixth largest economy, the PM said, “We are proud of what we have achieved and at the same time, we also have to look at where we have come from. That is when we will realised the remarkable strides the nation has made.” Praising his government’s foreign policy, the PM said that India’s voice is being heard effectively at the world stage. “We are integral parts of forums whose doors were earlier closed for us.”

Prime Minister Modi spoke about his aspirations and vision for the country. With the chants of 'Jai Hind' 'Bharat Mata ki Jai' 'Vande Mataram,' PM Modi concludes his Independence Day speech from Red Fort. National Anthem is being played now.

'Housing for all, power for all, water for all, LPG for all, toilet for all, skill for all, health for all, insurance for all, connectivity for all,' PM Modi said. 'There are many countries who have gone ahead of us in development. I pray that our country goes ahead of all of them. Malnutrition is a big problem in the country. I am impatient to provide quality of life to my people,' PM Modi said

Insaniyat, jammhuriyat and Kashmiriyat for development of J&K

PM Modi remembering Atal Bihari Vajpayee talked about his way of Insaniyat, jammhuriyat and Kashmiriyat to bring peace in Jammu &  Kashmir, Modi said that the local body elections will soon be held in the state as demanded by the local Kashmiri.

"The practice of instant triple talaq had left Muslim women miserable. Our government has strived to table the bill in Lok Sabha. But there are few people who do not want us to proceed. But I am promising my Muslim sisters that our government will make attempts to empower them," PM Modi said,

In his previous Independence Day speech, which lasted about 56 minutes, his shortest ever, Prime Minister Narendra Modi spoke on his vision of New India – a corruption-free, violence-free India where people live in equality without caste and communal differences. Modi also touched upon various issues confronting India’s Centre-state ties, economic reforms, financial inclusion and triple talaq. Modi had also said his government was committed to the “lost glory” of Kashmir. “Na gaali, na goli, parivartan hoga gale laga ke (Neither bullets nor brickbats will solve the Kashmir issue, only love will),” the PM had said.

As India celebrates its 72nd Independence Day, IndianExpress.com has compiled some of the most powerful images that define the country's existence over the past 71 years. Read more

Meanwhile, as Bollywood continues to probe and promote patriotic sentiments, here’s a look at how Hindi film heroes have kept up with the changing meaning of patriotism and the different ways in which love for the motherland has been expressed on the screen. The meaning of Patriotic Indian, according to Bollywood

Also, for all those who want to feel that strong sense of pride while indulging in some kite flying on August 15 this year, we have made it easier for you to make a playlist before you hit your terrace.