Inaugural flight from Kannur airport to Abu Dhabi on Dec 9, flights to Doha from next day 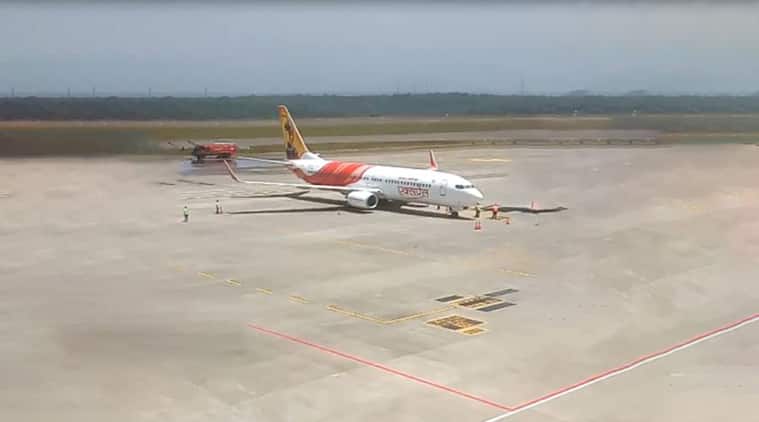 The trial flight landing at the Kannur Airport on Thursday. (Source: video grab)

On December 9, the inaugural flight from Kannur International Airport (KIAL) in northern Kerala will take off for Abu Dhabi at 10 am, minutes after the airport’s inauguration by Chief Minister Pinarayi Vijayan, top airport officials confirmed. The maiden Kannur-Abu Dhabi flight will be operated by Air India Express, the only airline to have released a schedule of commercial operations from the airport till now.

The KIAL airport is Kerala’s fourth international airport after Kozhikode, Thiruvananthapuram and Kochi which is set to serve the people of Kannur and Kasaragod districts, who had to earlier depend on the Karippur airport in Kozhikode or the one in Mangalore in coastal Karnataka.

The inaugural function is set to begin at 9 am at the airport’s main passenger terminal in Mattannur, 25 kilometres from Kannur town. While Prime Minister Narendra Modi was initially set to inaugurate the airport, now sources say Union Minister for Civil Aviation Suresh Prabhu will join CM Pinarayi Vijayan at the function on December 9. A section of the public would be invited for the inauguration as well as to view the take-off of the maiden flight. The airport will be inaugurated by Minister of Civil Aviation.

KIAL Operations Manager Binu Gopal confirmed that booking for the Abu Dhabi AI Express flight began on Monday. The flight, after taking off from KIAL will return to Kannur the same night, before it leaves for Riyadh, the capital of Saudi Arabia, late on December 9. From December 10, Air India Express will operate four flights a week to Doha in Qatar. This flight will leave Kannur at 8:20 pm IST to reach Doha at 10 pm, Qatar local time.

“Apart from AI, Indigo, Go Air and SpiceJet are also in talks with KIAL. They haven’t released their schedules yet. These flights would be on domestic sector,” said Gopal.

The choice of Abu Dhabi and Riyadh for the inaugural flight destinations from Kannur is critical as a large number of people from Malabar in northern Kerala are employed in Gulf Cooperation Council (GCC) countries like UAE, Saudi Arabia and Qatar. In fact, flights from Kochi, Thiruvananthapuram and Kozhikode to these countries witness heavy traffic round-the-year with prices soaring during festivals like Onam, Christmas, Vishu and Eid. Annually, the Kannur airport can handle up to one million international passengers and three lakh domestic fliers.

The greenfield airport, built on 2000 acres of land, has the rare distinction of having a 4,000-metre runway, considered massive in civil aviation and comfortable for the take-off and landing of wide-bodied aircraft like Airbus A-380. Only three other airports in the country – New Delhi, Bengaluru and Hyderabad – have 4000-meter runways.

Although commercial operations are set to begin on December 7, charter and military plans have landed at Kannur in recent months. Charter planes carrying BJP national president Amit Shah, Kerala Health Minister KK Shylaja and Union Minister Nitin Gadkari have landed at the airport for the leaders to take part in official and government functions. During the floods in August, Air Force planes had also used the airport’s runway to ferry relief materials.