In twin speeches in Parliament, Prime Minister Narendra Modi argued that the sentiment in the country has always been in favour of offering shelter to persecuted minorities from Pakistan and Bangladesh. From reading out an extract from a 1947 resolution of the Congress Working Committee (CWC) to quoting Jawaharlal Nehru, Lal Bahadur Shastri, B R Ambedkar and Ram Manohar Lohia, a combative Prime Minister Narendra Modi on Thursday dipped into history and invoked nation-builders in his twin speeches in Parliament to strongly defend the Citizenship (Amendment) Act (CAA).

He argued that the sentiment in the country has always been in favour of offering shelter to persecuted minorities from Pakistan and Bangladesh.

“The Congress is further bound to afford full protection all those non-Muslims from Pakistan who have crossed the border and come over to India or may do so to save their lives and honour,” Modi said in Rajya Sabha, replying to the discussion on Motion of Thanks to the President’s address.

Modi then quoted “some great men”.

He quoted from former Prime Minister Shastri’s speech in Parliament on April 3, 1964: “…in view of insecurity of life, property and honour of the minority communities in the eastern wing of Pakistan [present-day Bangladesh] and general denial of all human rights to them, the government of India should, in addition to relaxing restrictions in migration of people belonging to the minority communities from East Pakistan to the Indian Union, also consider steps for enlisting the world opinion.” 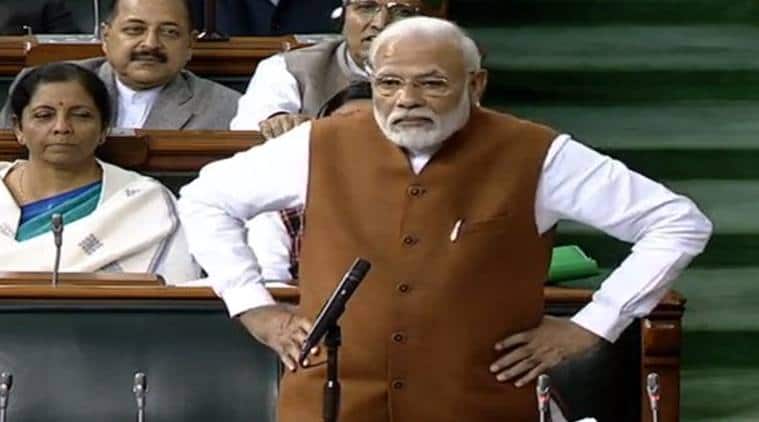 He also quoted Shastri as having told Parliament in 1964, during a discussion on refugees from Pakistan, that “as far as East Pakistan is concerned, its decision seems to indicate that all non-Muslims will be driven out from there. It is an Islamic state….non-Muslims cannot live there…”

Modi asked, “Will you also call him communal?”

Also read | In Rajya Sabha, Opposition unites only in spirit, no plan to show

In Lok Sabha, Modi quoted Nehru extensively to emphasise that the move to bring in CAA was something Nehru himself had advocated on several occasions. He said the Nehru-Liaquat Pact mentioned grant of citizenship to “minorities” from Pakistan. “Why did Nehru, who was a big thinker, say ‘minorities’ and not ‘all citizens’ of Pakistan,” Modi asked.

“Was Pandit Nehru communal? Did he want to create a Hindu Rashtra? Did he discriminate between Hindus and Muslims,” Modi asked of the Opposition benches. He said his government is saying today what Nehru had said decades ago.

Pointing out most of the Hindus who remained in Pakistan after partition were dalits, Modi quoted Ambedkar as having told them “I would like to tell the Scheduled Caste who happen today to be impounded inside Pakistan to come over to India.”

Addressing the “Samajwadi friends”, the Prime Minister said, “My request to them is that they may not agree with us but don’t negate Lohia.”

Modi then quoted Shastri “on the role of states with regard to refugees” and said, “Today because of vote bank politics…the games that are being played by passing resolutions in state assemblies…listen to Lal Bahadur Shastri’s speech…you will understand that where were you (then) and what happened to you now

“All our state governments have taken the issue of refugee settling as a national issue…for that we congratulate them. And in doing that we are happy. Be it Bihar or Odisha and be it Madhya Pradesh or Uttar Pradesh, be it Maharashtra or Andhra…all provinces and states have written to the Government of India that they are ready to settle them in their states….,” he quoted Shastri as having said in 1964.

The Prime Minister said, “All these statements were from great personalities who were our nation-builders. Were they all communal? The Congress and its friends have started forgetting the nation-builders because of vote bank politics. It is a matter of concern for the country,” he said.

In Lok Sabha, he also quoted Nehru’s intervention in a 1963 Calling Attention motion in Lok Sabha wherein the country’s first PM had said that the state of minorities in Pakistan needed to be addressed. Modi also cited examples of freedom fighters and former Congressmen Bhupendra Kumar Dutta and Jogendra Nath Mandal, who decided to stay back in Pakistan after the Partition. Quoting a letter, Modi said Dutta told the Constituent Assembly of Pakistan that Hindus were being targeted in that country.

Dutta had migrated to India before his death. Mandal was the first Law Minister of Pakistan and he had also flagged systematic ethnic targeting of religious minorities in Pakistan, Modi said.

Modi said: “All these things were alright 10 years ago…there was no uproar. Today, your world has suddenly changed. I never thought defeat will trouble you so much,” he said.

Shiv Jayanti: Sena says as per tithi this year, hints at reviewing stand