The process involves collection of semen from elite bulls in 56 bull stations, which is frozen in vials or ‘straws’, and transported in liquid nitrogen containers (at minus 196 degrees Celsius) to dairy farmers across the country. 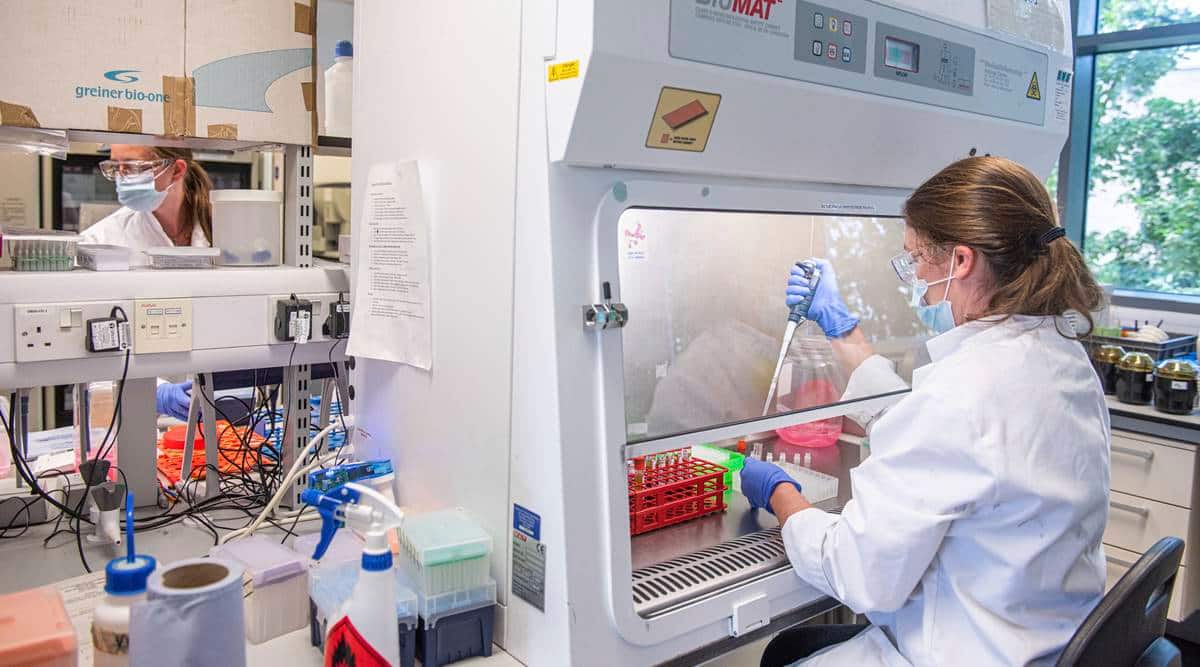 An Oxford Vaccine Group researcher in a laboratory in Oxford, England, works on the coronavirus vaccine developed by AstraZeneca and Oxford University. (AP)

As multiple vaccines against COVID-19 gets ready to hit the market, concerns over a proper countrywide cold chain infrastructure for maintaining the integrity of these live/inactivated viruses or DNA/RNA genetic material have cropped up. But policymakers and public health professionals can probably learn a lesson or two here from the dairy industry. And no, it isn’t about low/sub-zero temperature transport and storage of milk, butter, curd or ice-cream, but about bull semen.

Almost 8 crore artificial inseminations (AI) are performed annually in India. These AIs involve transport of semen, collected as raw ejaculate from elite bulls and packaged after freezing in vials or “straws”, for inserting into the reproductive tracts of cows and female buffaloes. This semen – originating from animals in 56 bull stations and used to inseminate female bovines belonging to farmers across the length and breadth of the country – is preserved throughout its journey at minus 196 degrees Celsius. This is way lower than the minus 20 to minus 70 degree requirements of the Moderna and Pfizer Covid vaccines!

The reasons for the extreme freezing-temperature cold chain requirements for AI semen are the same as for vaccines. The sperms or male genetic material from fresh bull semen will lose their viability in normal room temperatures within 15 minutes of collection. Therefore, the 5-ml or so semen from each ejaculation is first diluted enough to fill up to 250 “straws”, each containing 0.25 or 0.5 ml solution. The straws are, then, sealed and printed with details of the donor bull, the date of collection/filling, etc. Post-printing, the straws are frozen by immersing in liquid nitrogen containers. These containers – typically of 35 litres (having 2,500 straws) or 48 litres (15,000 straws) capacity – are transported from the bull stations to different parts of India.

Explained: Five reasons the Oxford-AstraZeneca vaccine is better news than the Pfizer and Moderna shots

“Liquid nitrogen (produced by compressing and cooling nitrogen gas to below its evaporation/boiling point, which is minus 195.79 degrees Celsius) is the most important ingredient in our cold chain. It ensures that the frozen straws are maintained at the required temperatures even seconds before being used to inseminate the female animal at the farmer’s doorstep,” explains Ashok Pande, Group Vice President (Scientific Research and Livestock Development) at BAIF Development Research Foundation.

With 300 active bulls at its two stations at Urulikanchan in Pune district and Dharouli in Jind (Haryana), BAIF produces around 45 lakh semen straws every year. That makes it India’s second largest after the National Dairy Development Board, which manages four semen stations at Bidaj (Gujarat), Salon (Uttar Pradesh), Alamadhi (Tamil Nadu) and Rahuri (Maharashtra) that together supply some 380 lakh doses annually. The sires maintained in bull stations are animals whose female parent (“dam”) have recorded history of superior lactation. By injecting the semen extracted from such progeny-tested bulls into farmers’ cows, their milk production would go up. This programme of AI-mediated crossbreeding and genetic improvement of cattle and buffaloes, which has been going on for the last 50 years, is what has led to India’s emergence as the world’s largest milk producer.

In 2018-19, a total of 787.48 AIs were performed in India, of which 360.55 lakh were by state animal husbandry departments (AHD), 189.85 lakh by dairy cooperatives and 242.08 lakh by other agencies. The AIs are carried out by paraveterinarians, who get the 135-mm-long straws from the jumbo containers received by the AHD/dairies refilled into smaller 3-litre containers. The paravets insert the frozen semen doses after thawing for a few seconds using specially-made AI guns. The insemination is done at the farmer’s doorstep when the female animal is at the peak of her “heat” or estrous cycle that comes every 20-21 days.

Editorial: India will need to build an adult vaccination system virtually from scratch

“The 3-litre container (which has about 720 straws) is the real reason for the success of India’s AI and crossbreeding programme. Unlike in the US or Europe, where inseminators travel to farms in their cars, our paravets needed smaller containers that could be strapped on two-wheelers going to the remotest of villages,” points out Pande.

Explained | How far are we from a Covid-19 vaccine now?

All this, of course, has been underwritten by an efficient cold chain system, about which not much has been written about. The coolant used – liquid nitrogen sourced from chemical fertiliser units or liquid oxygen plants, which produce it as a by-product – and machines for filling into straws are established technologies for dairymen.

“The most crucial aspect of the AI cold chain is its reliability (ensuring viability of the sperms from the point of semen extraction to its injection into a female bovine) and reach (to the distant interiors). I am sure this can be of some relevance to the national rollout of the Covid vaccine,” says Rajiv Mitra, CEO of the Ahmednagar (Maharashtra)-based Sunfresh Agro Industries Pvt Limited. This dairy, which is part of the French Lactalis Group, does roughly 1 lakh AIs a year. There are others, such as Gujarat’s Kaira District Cooperative Milk Producers’ Union (Amul Dairy), that do 10 lakh-plus AIs annually.”

Mitra’s dairy currently has 50 centres, from where its paravets collect BAIF-sourced straws in 3-litre containers. These inseminators come every third day to the centres, to replenish both the straws and liquid nitrogen in their containers.

Also Read | From vaccine-readiness to need for funds: what states told PM Modi

“Each time the container is opened, liquid nitrogen escapes. We maintain a reserve stock of liquid nitrogen at our centres, from where the inseminators can get it refilled. The process isn’t very complicated,” adds Mitra.

That lack of complication may be of some assurance when the country is searching for viable cold storage solutions in something different from bull semen.