“Our duty is play it (the anthem) and shut the door when it is on. We can’t force people to stand." 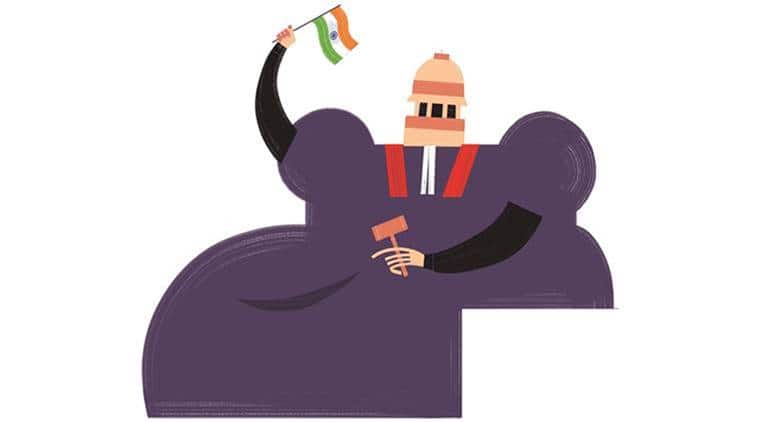 EIMPA vice-president Krishna Narayan Daga says it is the government’s responsibility to ensure that people stand up when the national anthem plays. (Illustration by C R Sasikumar)

The Supreme Court’s recent ruling that mandates the playing of the national anthem before movie screenings is giving owners of theatres that show adult films sleepless nights. Confessing that they were having a tough time with members of the audience often refusing to stand when the national anthem is played, those running single-screen movie halls lodged in several nooks of the city blame it on a lack of awareness. “Most people come here for pornographic entertainment and a majority belong to the poorer sections of society. How can one expect a crowd coming from a slum to watch Matric Pass 2 to stand while the national anthem is being played?” asks S K Jha, the booking clerk of Regal theatre in central Kolkata, a rundown hall known for screening adult films.

The 312-seater hall usually sees around 150 patrons on weekends and 70-100 on weekdays, says Jha. “There are only 11 staff members in all here. It is not possible to leave all our work and engage in asking people to stand while the anthem is playing.” The Society Cinema hall, located two blocks away from the Kolkata Municipal Corporation headquarters in one of the busiest localities of the city, is facing the same dilemma. Dr S A Ferozie, its manager, says its not humanly possible to man all shows of a theatre with a capacity of 1,087. “In that case, we will have to get police backup because more often than not, people will ask us why we are bothered if they don’t stand,” he said.

A staffer from another such theatre in north Kolkata said this was not the first time such an attempt was being made. “Earlier, the anthem used to be played after the film was over. It was observed that once the patriotic fervour came down, people left the auditorium before the anthem was over,” he said. Movie-goers too are of the same opinion. “I love my country but I have come to watch this film for a different purpose. Why should anyone try to thrust nationalistic feelings upon me? I love my country and I don’t need to display it at a time when I have come to watch an adult film,” said a patron after emerging from a noon show at Regal.

“Our duty is play it (the anthem) and shut the door when it is on. We can’t force people to stand. At most we can request them politely but whether or not they will do it is solely up to them,” says Sunit Singh, chairman, exhibitors’ section, Eastern India Motion Picture Association (EIMPA). However, it was lean season owing to demonetisation and the true test would be when a popular film is screened to a full house, he adds. Multiplexes, however aren’t facing this problem. EIMPA vice-president Krishna Narayan Daga says it is the government’s responsibility to ensure that people stand up when the national anthem plays.

Subscriber Only Stories
View All
ExplainSpeaking | Budget 2023-24: Economic growth, fiscal health and unem...
In Jharkhand district, block-level clubs help elderly deal with loneliness
Delhi Confidential: PM Modi, top leaders attend Nadda wedding, but QR cod...
What could be the govt’s calculations behind the slashing of the MG...
Monthly plan to access Budget
First published on: 09-12-2016 at 01:55 IST
Next Story

5 reasons why you should add turmeric to your diet