Responding to the Bihar CM’s poser on if the UP government would announce 50 per cent reservation for women, Adityanath said: “Nitish Kumar loves talking about ‘aadhi aawadi (women)”, but why is he silent on triple talaq? 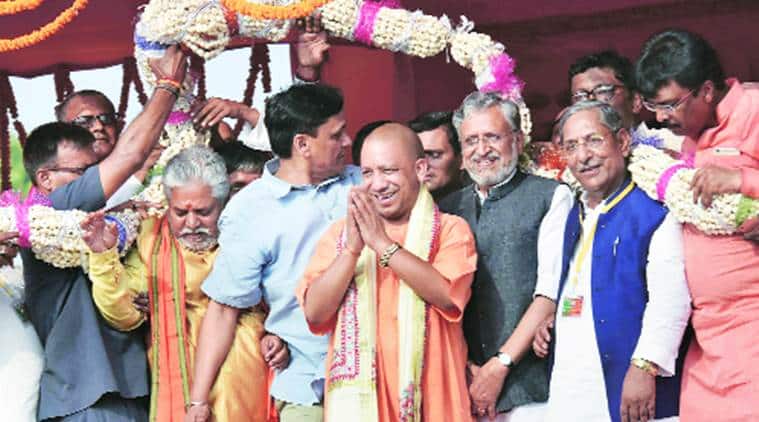 IN HIS first visit to Bihar after taking over as Uttar Pradesh Chief Minister, Yogi Adityanath dared his Bihar counterpart Nitish Kumar to close down illegal slaughterhouses in the state within 24 hours as he did in UP. Responding to Kumar’s poser on imposing prohibition in UP, he said that if people of Bihar followed Yoga strictly, there would be no need for prohibition.

Adityanath was speaking about the NDA government’s achievements in the past three years at a gathering in Darbhanga, where Nitish addressed a public meeting Wednesday. Responding to the Bihar CM’s poser on if the UP government would announce 50 per cent reservation for women, Adityanath said: “Nitish Kumar loves talking about ‘aadhi aawadi (women)”, but why is he silent on triple talaq?… the silence of secular (brigade) on triple talaq reflects difference in its actions and words”.

He went on to say, “If people of Bihar follow yoga strictly, there would not be any need for prohibition. About 200 countries of the world, including our rival China, follow yoga. I think Pakistan should also follow yoga if it wants its existence to remain intact.”

Throwing a challenge, he said. “I closed down illegal slaughterhouses in UP within 24 hours, can he (Nitish) do the same?”

Adityanath also announced that the Centre was working on a four-lane project between Ayodhya and Sitamarhi that would be named Ram Janki Marg. He said he was going to adopt Bihar as he planned to keep visiting districts of the state. The UP CM also went on to say that BJP would come to power in Bihar in 2020.

On Ram Mandir, he said: “Main aapko Ayodhya Dham ke prati aashwast karta hoon. Aapki bhavna ke anurup hi kaam hoga. Maamla court me hai (I assure you regarding the Ayodhya temple. The work will be done as per your sentiments. The matter is in court”. Pointing at BJP’s legislature party leader Sushil Kumar Modi, he said: “Those who participated in the JP movement are here, but there are some who have gone to the other side out of greed of power”.