Gauri Lankesh murder probe: When he was arrested in February, Naveen Kumar was found in possession of 15 rounds of .32 calibre live cartridges which are the equivalent of 7.65 mm cartridges. 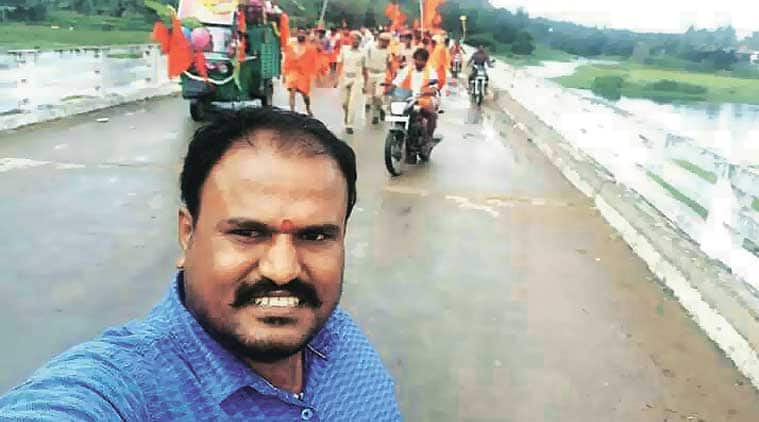 Impressed with the logistical support he provided before the murder of journalist Gauri Lankesh, the conspirators behind her killing tasked Hindu Yuva Sena leader K T Naveen Kumar, who was arrested for his alleged involvement in her murder, to kill outspoken writer-rationalist K S Bhagwan in Mysuru, investigations have found.

Kumar was in the process of procuring a gun to kill Bhagwan at the behest of co-conspirators when he was arrested on February 18, by the Bengaluru police for illegal possession of bullets, sources said.

He is suspected to have surveyed and pointed out Gauri Lankesh’s house to a group of killers who came from outside Karnataka to murder her. Gauri was killed outside her house in Bengaluru on September 5, 2017.

Kumar will also undergo a narco-analysis test to understand the depth of his knowledge about the conspiracy to kill Gauri Lankesh and to corroborate statements given so far. He consented to undergo narco-analysis when produced before a magistrate’s court in Bengaluru Monday. Kumar, in court last week, had refused to undergo the test despite giving his consent in police custody before witnesses. A protest against the murder of Gauri Lankesh in New Delhi. Gauri was killed outside her house in Bengaluru on September 5, 2017. (Express Photo/Tashi Tobgyal/File)

Bengaluru Deputy Commissioner of Police (West) M N Anucheth, who is also the investigating officer in the SIT probing the Gauri Lankesh murder case, said that the alleged murder plot to kill writer-rationalist K S Bhagwan would now be pursued under sections of the Indian Penal Code for attempt to murder and criminal conspiracy case and not just an illegal arms case. Also read | Who is Gauri Lankesh?

The addition of these sections will implicate Kumar in the attempt to murder Bhagwan — a strident critic of practices and beliefs in the Hindu religious system. Though Kumar has been granted bail in the Arms Act case, police will file a revision petition to consider the serious, new charges and reject bail, said Anucheth.

A magistrate before whom Kumar was presented on March 2 in connection with Gauri Lankesh murder case was given a sealed copy of a voluntary statement provided by Kumar about his role in the two conspiracies.

Sources claimed that a delay of one week in arresting Kumar last month would have resulted in a murder attempt on Bhagwan. Investigations conducted so far in the Arms Act case against Kumar — who is also affiliated with the radical right-wing Hindu group, Sanatan Sanstha — have revealed that he was tasked with organising a support group to carry out surveillance at the writer’s home, procure a weapon and facilitate a shooting operation by a team that had already visited Karnataka and was scheduled to return when the gun was in hand.

Some close associates who Kumar had involved in the plot to provide support for the Bhagwan operation have provided evidence during the probe to indicate the stage of planning of the operation — including a visit by some outsiders speaking a different language.

In Mysuru, where Bhagwan lives, security for the writer-rationalist was enhanced recently. “He was being provided security, which has now been increased to the highest possible level after another investigation revealed that his life is under serious threat,’’ Mysuru Police Commissioner Subramanyeshwar Rao said.

While Kumar initially claimed during investigations that he was to obtain a weapon from outside Karnataka, subsequent investigations have revealed that a weapon was to be delivered to him in the state through an arms and ammunition network that he had used for a few years, police sources said.

When he was arrested in February, Kumar was found in possession of 15 rounds of .32 calibre live cartridges which are the equivalent of 7.65 mm cartridges.

Investigators are of the view that the plot to murder Bhagwan with a new weapon was probably an attempt by the conspirators to divert attention from the Gauri Lankesh case, where investigations had indicated that she was shot with a 7.65 mm country-made gun. Sources said the same weapon was used to kill Kannada literary researcher and scholar M M Kalburgi, 77, in Dharwad in August 2015 and leftist thinker Govind Pansare, 81, in Kohlapur Maharashtra in February 2015.

Though the SIT sought to take Kumar to Goa and Belgaum, to unravel the conspiracy behind the murder of Gauri Lankesh, police did not travel with Kumar over the last four days after he complained of a poor back, sources said.

After producing Kumar in court Monday, the SIT did not seek further custody of the suspect and the magistrate’s court remanded him to judicial custody for 15 days.