How state govts sponsor pilgrims to Haridwar, Ajmer or Jerusalem

After Centre’s Haj move, we looks at various state-run subsidy schemes for pilgrims. 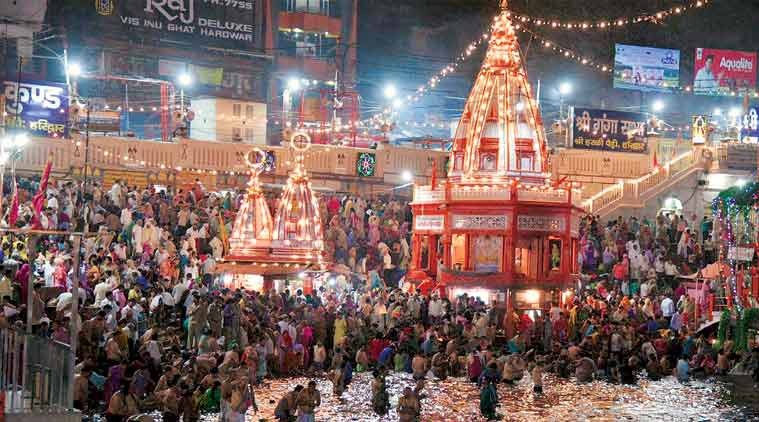 Pilgrims at Haridwar, a site on the subsidy map of a number of states. (Virender Singh Negi/file)

A number of states subsidise pilgrimages to sites of various religions, with many also providing free travel and other facilities to their senior citizens. At a time when the Centre has stopped subsidising Haj from this year, a look at pilgrimage subsidies run by various state governments:

In 2012, MP introduced the Mukhya Mantri Teertha Darshan Yojana, among the first of its kind. The first lot travelled to Rameshwaram that September. Meant for senior MP citizens who don’t pay income tax, the scheme targets 1 lakh persons every year. In the first nine months of current fiscal, 89,000 have been sent, chosen by lots from all 51 districts; one can travel only once. They are taken by train to sites such as Badrinath, Kedarnath, Jagannath Puri, Dwarka, Vaisnho Devi, Gaya, Haridwar, Shirdi Tirupati, Ajmer Sharif, Kashi, Sammed Shikar, Shravan Belagola and Velankanni Church. Much earlier, the BJP government started subsidising pilgrimages abroad for Rs 30,000 or 50% of the expenses, whichever is less. The sites covered are in Pakistan (Nankana Saheb, Hinglaj Mata Mandir), China (Mansarovar), Cambodia (Angkor Vat) and Sri Lanka (Sita Mandir, Ashok Vatika).

The Delhi cabinet approved this week the Mukhyamantri Tirth Yatra Yojana, a free scheme for 1,100 senior citizens from each assembly seat. The 77,000 pilgrims, selected by lots, can take an AC bus on any of a number of package routes to sites including Mathura, Vrindavan, Agra, Haridwar, Hrishikesh, Neelkanth, Ajmer, Pushkar, Wagah, Anandpur Sahib, Vaishno Devi and Jammu. An official said the beneficiaries must not be earning more than Rs 3 lakh per year or be a government employee. The scheme includes insurance of over Rs 2 lakh. Board and lodging, food and travel will be paid for.

UP gives subsidies for the Kailash Mansarovar Yatra and Sindhu Darshan Yatra. The first 100 applicants for the Sindhu Darshan subsidy have been getting Rs 10,000 since 2015, when the SP was in power. It was giving Rs 50,000 for every Kailash Mansarovar pilgrim; last year, the BJP government doubled it to Rs 1 lakh The current government has discontinued the SP government’s Shravan Yatra that provided a special train for elderly pilgrims to various places. Principal secretary (religious affairs) Awanish Awasthi said the increased subsidy for Kailash Mansarovar Yatra will be given from this year.

In 2014, the Congress government started the Mere Buzurg Mere Teerth scheme sponsoring senior state citizens’ pilgrimage to sites in the state including Gangotri and Badrinath and Reetha Meetha Sahib. Delhi’s Nizamuddin Dargah was initially part of it but later removed. In 2017, the BJP government changed the name to Pandit Deendayal Matra-Pitra Tirthatan Yojana and added new sites: Haridwar’s Piran Kaliyar dargah and several Hindu sites in the state. “We have been continuing with all schemes initiated by the previous government, including those for minorities,” said minister and government spokesperson Madan Kaushik. According to the Tourism Development Board, 12,343 people availed the scheme between September 2014 and November 2017; the department spent Rs 374.24 lakh in 2015-16 and Rs 124.69 lakh in 2016-17. The culture department subsidises pilgrimages to Kailash Mansarovar, with the amount raised to Rs 30,000 this year. Between 2008 and 2017, at Rs 25,000 per pilgrim, the state spent 32.25 lakh.

In its vision document for the polls recently won, the BJP promised a subsidy scheme for elders on Char Dham Yatra. Manisha Nanda, additional chief secretary and principal secretary to the CM, said the vision document has been adopted as government policy and a decision will soon be taken. “We have to work out the modalities of the scheme,” she said. The vision document also promised free travel for senior citizens to religious sites in Dev Bhumi.

Schemes started by the current government provide subsidies to 50 elderly citizens (Rs 10,000 each) on Sindhu Darshan Yatra in Ladakh, and another 50 pilgrims (Rs 50,000 each) on Kailash Mansarovar Yatra. A government spokesperson said Rs 5 lakh and Rs 25 lakh for the respective pilgrimages have been allocated in the annual plan of 2016-17.

In 2013, the Congress government introduced an all-expenses paid railway trip for senior-citizen pilgrims. The scheme, which benefited 41,390 pilgrims in 2013-14, 6,914 in 2014-15, and 8,710 in 2015-16, was renamed Deendayal Upadhyay Varisht Nagrik Teerth Yojana by the BJP government last year, with added air services added (for citizens over age 65). The current year’s scheme covers 13 sites including Tirupati, Rameswaram, Sammed Sikhar, Jagannath Temple and Vaishno Devi. Since 2013, 80,221 people have availed the scheme via train and 5,762 by air; the state hasspent Rs 125.50 crore.

The Kailash Mansarovar Yatra scheme has run since since 2001; a scheme for the Sindhu Darshan and the Shravan Tirthdharshan Yojana were introduced this year. “Everyone has a desire to go on a pilgrimage… The poor cannot, so the state provides them not the entire cost but some assistance,” said Kirit M Adhvaryu, secretary of implementing agency Gujarat Pavitra Yatradham Vikas Board.

For the Kailash Mansarovar Yatra, financial assistance of Rs 23,000 (Rs 20,000 for travel and Rs 3,000 for kit) is given to pilgrims from Gujarat. This amount has not changed since 2001 though cash has replaced the kit. So far, the scheme has benefited 1,750 pilgrims with Rs 4.02 crore. For the four-day Sindhu Darashan yatra from Leh in Ladakh, along the Sindhu river originating in Tibet, the state subsidises Rs 15,000 for up to 200 pilgrims, chosen by lots; this can be availed only once in a lifetime. Shravan Tirthdharshan Yojana, for senior citizens travelling in a group (minimum 50) within Gujarat, covers travel expenditure (50% of bus fare).

Residents of Karnataka can avail a one-time subsidy of Rs 20,000 for the Char Dham Yatra to Badrinath, Kedarnath, Gangotri and Yamunotri. Every year 1000 to 1,500 people avail the subsidy, introduced by the Congress government in 2014. The previous BJP government had introduced a Rs 30,000 subsidy for Manasa Sarovara pilgrimage. The state budget sets aside Rs 5 crore every year for these subsidies. The tourism department in 2017 also introduced a subsidy for pilgrimage packages, Puneeta Yathre, to religious sites of all communities within the state, providing 25% of the basic cost of a package.

Tamil Nadu has two subsidies for pilgrimages – for Christians travelling to Jerusalem, and Hindus to Mansarovar and Muktinath. The Mansarovar-Muktinath subsidy was announced in 2012. As per the initial proposal, the state was bearing Rs 40,000 of the estimated Rs 1 lakh per individual for air travel to Mansarovar and Rs 10,000 for those visiting Muktinath in Nepal. It was meant for 500 beneficiaries, 250 for each destination. “Last July, we increased the number of beneficiaries to 1,000 and allocated an additional Rs 1.25 crore,” said an official with Hindu Religious and Charitable Endowment.

The Jerusalem subsidy, also since 2012, benefits 500 pilgrims with Rs 20,000 each between February and May. The government allocated Rs 2 crore for two years, with pilgrims shortlisted district-wise by lots. The district backward classes and minority welfare department handles this across the state, said an official with the Chennai DC office.

The government began the Baristha Nagarika Tirtha Yatra Yojana in 2016 and sanctioned Rs 5 crore for 2016-17. It provides for 100% concession for senior citizens below the poverty line, 50% for non-BPL pilgrims (except income-tax payees) of age 60-70 and 70% for those aged 70-75. The scheme covers three divisions: Southern (Rameswaram, Madurai), Central (Allahabad, Varanasi) and Northern (Hrishikesh, Haridwar). A total 2,931 pilgrims availed the scheme in 2016, a tourism department report states. This year, CM Naveen Patnaik flagged the train to Tirupati and Vellore; other destinations are Ajmer, Pushkar, Shiridi and Trimbakeshwar. “The government is expected to increase the allocation in the upcoming budget session.” said Saroj Kumar Jena, assistant director (tourism).

The current BJP government introduced the Punyadham Yatra scheme in 2017. It is for 3,000 pilgrims travelling in groups — men aged 60-75, women 55-70 — to Jagannath Temple, Vrindavan, Ajmer Sharif, Mathura and Vaishno Devi. The government sponsors free train (AC-3) and road transportation from Guwahati and three-day lodging, and provides allowance of Rs 150 per pilgrim plus Rs 500/day for guards (three in a group). —ENS Team, from the centres

‘Misbehaviour’ with former MC: Deputy mayor could not record his statement