The invalid notes, turned into a pulp and mixed with wood pulp, are being used as hardboards in South Africa, where general elections are scheduled in 2019. 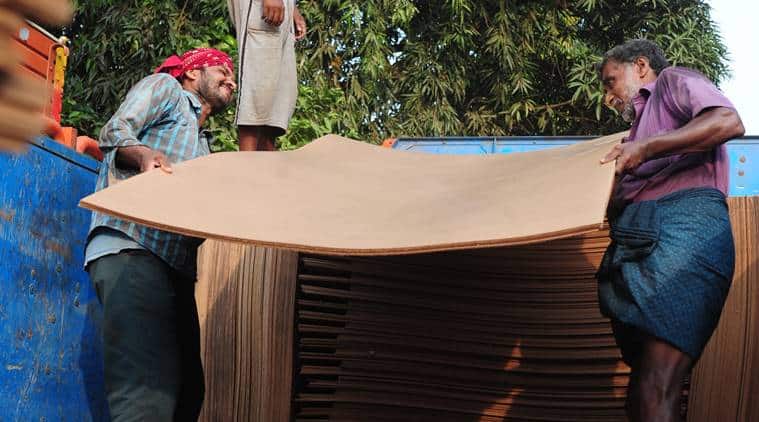 Thanks to a deal struck between the Reserve Bank and Western India Plywoods (WIP), a company headquartered in Kannur, Kerala, the invalid notes, turned into a pulp and mixed with wood pulp, are being used as hardboards in South Africa, where general elections are scheduled in 2019. (Express Photo)

Hundreds of thousands of old currency notes of Rs 500 and Rs 1000, declared invalid by the BJP-led government last year, are making the rounds in far-away South Africa. Yes, thanks to a deal struck between the Reserve Bank and Western India Plywoods (WIP), a company headquartered in Kannur, Kerala, the invalid notes, turned into a pulp and mixed with wood pulp, are being used as hardboards in South Africa, where general elections are scheduled in 2019. The exported hardboards are being used as placards and hoardings in the election campaign.

“Shortly after demonetisation was announced, the Reserve Bank based in Thiruvananthapuram approached us. They didn’t how to dispose of the notes. If burnt, it would cause massive environmental damage since the notes are made of special currency paper. We asked them to send us samples. Then our Research & Development wing found a method by which we can use the notes,” TM Bava, general manager of WIP, told the Indian Express by phone.

“We received the shredded notes in the form of briquettes from the RBI which we cooked at a high temperature. This pulp is put into a defibrator (a refiner which grounds pulp material using steam). And then we mix this pulp with wood pulp which is then used as hardboards,” he said. “There is a lot of export to bulk buyers in South Africa where it is used as placards in the election campaign,” said Bava, along with regular exports to countries in Africa and the Middle-East. The exported hardboards are being used as placards and hoardings in the election campaign. (Express Photo)

WIP, which Bava claims is the only company in India with the technology to recycle the invalid notes, has received nearly 750 tons of such notes in about 50 trailers since demonetisation. Each ton of notes is bought by WIP from the RBI for Rs 128. The entire process is undertaken at the WIP headquarters in Valapattanam in Kannur.

Bava says the hardboards made with currency pulp is sturdier and has a distinct appearance. “It is high-grade pulp,” he said. In fact, he says, retail dealers buying such hardboards from WIP in the domestic market are selling it at a higher price. “They tell customers that it is made from notes (laughs). They are selling it as a premium product,” said Bava.

“But we are selling it at the same price. We have principles and business ethics. In fact, through research, we have turned this into a value-added product, which otherwise would have caused a lot of environmental damage,” he said. WIP, Bava says, is forced to pay for the transportation, packing and loading charges for each trip made from the RBI centre in Thiruvananthapuram to the company in Valapattanam, Kannur, due to which the raw-material costs go up. “We are getting offers from other states also,” he told the Indian Express.

On November 8 last year, Prime Minister Narendra Modi, in a surprise midnight announcement, declared all Rs 500 and Rs 1000 currency notes invalid in a bid to cut down on corruption, root out black money and slash at the roots of counterfeit currency in the market. With such a swift action, nearly 86% of the currency in circulation was withdrawn. In August this year, the RBI said that 98.96% of the demonetised currency, amounting to Rs 15.28 lakh crore, had come back into the system.