Across the country, many may have successfully beaten the virus, but their lives have been upended by the loans they have to repay courtesy of huge Covid-19 medical bills. 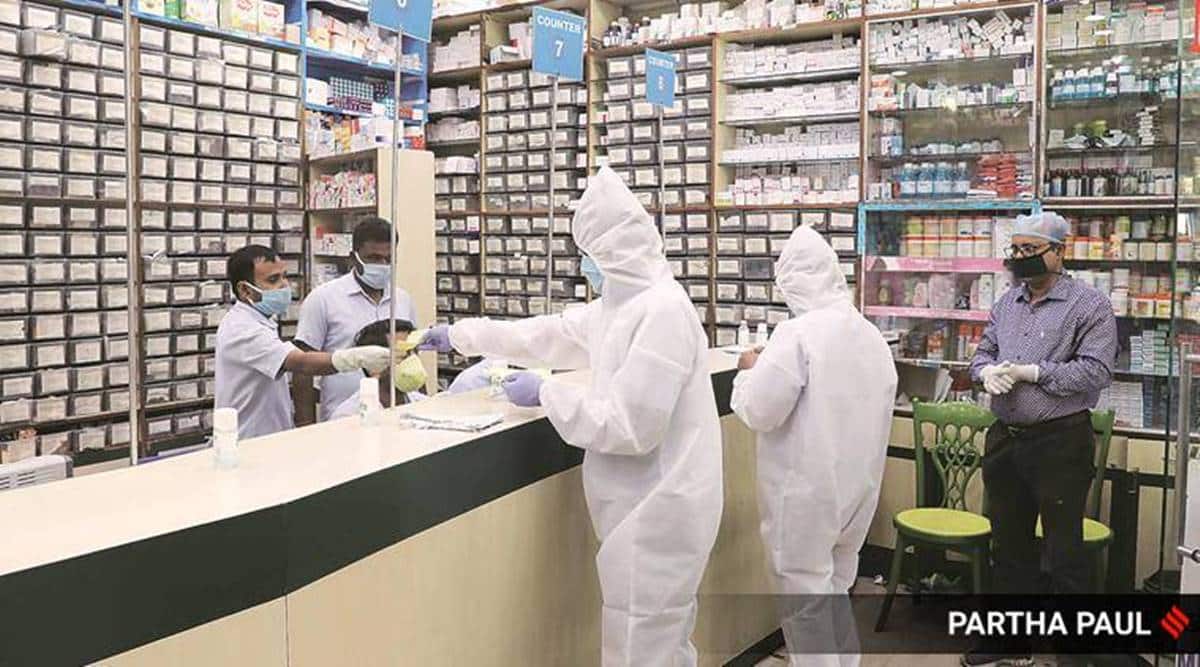 Patients who have recovered from the virus have dipped into years of savings, sold jewellery, mortgaged property, and borrowed from friends to clear the medical bills. (Express photo by Partha Paul)

For 50-year-old D Nath (name changed), the battle with Covid-19 may be over, but the stress is not. Last month, testing positive for the virus, the Guwahati-based businessman got himself admitted to a private facility in the city. “It was not a bad case of infection, but my brother, who had tested positive too, had his oxygen level dropping,” recalled Nath, “So we thought it was better to be under supervised care.” After scouting several hospitals in the city, all of which were out of their budget, the duo finally found a small private hospital, which quoted a lump sum of Rs 1.7 lakh for treatment, till they tested negative.

While he thought it was pricey, Nath felt it was a sum he “could manage”, so they checked themselves in, sharing a room. Ten days later, on the morning of discharge, they were presented with a bill, almost double of what was quoted to them earlier. “There were these additional charges — for medicines, and whatnot. We argued with them the entire day, making several calls to the owner, managing director of the hospital — nothing worked. Till we paid, they would not let us go,” said Nath.

Finally, after arranging money from friends and family, they paid the entire amount, and reached home late, only late at night.

A month later Nath has fully recovered but it’s an experience that has left a bitter taste in his mouth. “Sure, the virus is gone but now I have to figure out how to pay the money back,” he said, “Luckily, I have understanding friends.”

Subscriber Only Stories
View All
Three big takeaways of Union Budget 2023-24: Capex, fiscal prudence and n...
Scintillating sea creatures and what makes them special
Union Budget 2023: How the government calculates the math
Focus on border areas, NCC plans to raise cadet strength by 8 lakh
Monthly plan to access Budget
A doctor performs endoscopic sinus surgery on a patient, who is suffering from Mucormycosis, at a hospital in India. (Photo: REUTERS)

He is not the only one. Across the country, many may have successfully beaten the virus, but their lives have been upended by the loans they have to repay courtesy of huge Covid-19 medical bills. They have dipped into years of savings, sold jewellery, mortgaged property, and borrowed from friends to clear the medical bills.

In Telangana, N Vignesh Yadav lost his father to Covid-19 two weeks back. Earlier, Vignesh had run around Hyderabad, looking for a private hospital to take his father in. But deterred by the exorbitant prices, the 18-year-old resorted to a crowded government hospital. “Soon, I received a call from my father telling me there was no one to attend to him. I pleaded with the staff at the hospital reception but they dismissed me and three hours later, he died,” said Vignesh.

His cousin Shiva Krishna said that this would not have happened if the father had gotten better care, perhaps in a private facility. “We had tried but the hospital demanded Rs 2 lakh at the time of admission and said the treatment would cost around Rs 75,000 per day,” said Krishna, “We enquired in a couple of other private hospitals, too, only to find out that the treatment charges are the same everywhere,” he said.

While Telangana — and several other states in India — has put a cap on prices for Covid treatment in private hospitals, the reality which pans out on the ground is rather different.

In Manipur, Rita Thounaojam, whose husband Irom Maipak, a National Award-winning cinematographer succumbed to the virus last week, had to borrow from friends and relatives, and sell her gold necklace for a lakh, to pay the hospital bill.

According to Thounaojam, the hospital authority showed the charges of ICU per day was approximately Rs 9,800 (excluding charges for oxygen cylinders). However, as her husband’s condition worsened, the hospital had to administer oxygen through a ventilator. “As the oxygen cylinders were used hourly, there were no specific charges, but the total charges came in between Rs 20,000 to Rs 35,000 in a day,” she said. Ultimately, the final bill she paid was around Rs 9 lakh.

Following that, several NGOs demanded that the fees of private hospitals be capped — and on Wednesday, the Manipur Government finally passed an order to that effect.

Sadam Hanjabam, CEO of Ya_All, one of the NGOs behind the memorandum to cap the prices, said that many people continue to stay in home isolation because they “fear huge medical bills in hospitals.” “They only rush to health centres when it gets serious and by that time it is too late,” Hanjabam said, “So if we do not cap the price, many might die just because they are too scared to seek treatment.”

While price caps are in place in many states in the country, poor implementation of the orders and lack of grievance redressal make them practically useless.

After a month in the hospital battling Covid-19, Annadevara Srinivasa Chary, an electrician based in Hyderabad, was finally home. But not before his family underwent what they described, “trauma which was beyond words”.

On the day of discharge, they were handed over a bill for over Rs 23 lakh. They had already paid a lakh as a deposit at the time of admission, and another Rs 3.5 lakh during the treatment. “We were asked to pay Rs 19.15 lakh. The bill stated that Rs 2.45 lakh was a ‘consultation charge’ for two physicians and a pulmonologist. Rs 35,000 was charged per day for isolation in the ICU and Rs 25,000 per day for days in the general ward,” explained Chary’s brother A Devender.

Advertisement
While price caps are in place in many states in the country, poor implementation of the orders and lack of grievance redressal make them practically useless. (File)

Devender recalled that even arranging for the Rs 1 lakh deposit was tough, and several relatives had to pitch in. “But that was not all, we knew the hospital bill was growing with each passing day. In a week, we had to mortgage our house for Rs 5 lakh,” he said.

As the story of their plight went viral on social media, the hospital finally offered them a discount. “We also got some time to arrange the money. But after discharge, we now have multiple loans to repay with interest,” said Devender.

Telangana had introduced a cap private hospital treatment in June 2020 itself. However, scores of complaints of excess billing by private hospitals abound. Following many such complaints, three hospitals were issued show-cause notices and the license to treat Covid patients in one of the hospitals in Madhapur was cancelled earlier this month.

Inayat Singh Kakar, Delhi-based public health activist and researcher, who is associated with All India Drug Action Network (AIDAN), said that while many states have put price cap orders in place, implementation was poor.

“Different states have done things differently. For example, in the Delhi government order, most things, including care of co-morbidities during Covid treatment, are covered in the cap. But in some states cost of all treatments is not covered, allowing the hospital to overcharge on those aspects,” she said, “In the bills, we analysed last year, we saw that many hospitals charge excessively on PPE, medicines, and came up with different ways to overcharge and profiteer.”

Kakar said that therefore it was important for states to build upon the experiences of overcharging by private hospitals during the first wave and realign the orders. “There are no checks and balances to make sure that the implementation is happening as per the spirit and letter of the notification, so the hospitals get away with it,” she said.

States need to be more proactive

In Chennai, a 27-year-old man working in the IT sector is paying Rs 60,000 daily for his father’s treatment. For that, he has borrowed from his brother-in-law and other relatives and even pledged his family’s jewellery.

On May 22, the Tamil Nadu government issued an order to regulate treatment charges at private hospitals.

But according to the 27-year-old, many are unaware of the caps the government has enforced. “It’s a desperate time and many just want to get into some hospital without questioning the price,” he said.

Such cases of overcharging are rampant — and only some make it to social media, and ultimately get help. “Lots of stories don’t come out because people are just quiet about it and don’t want to fight the hospital,” said Kakar. She said many hospitals usually do not want to implement the caps and therefore, do not inform the patients about it. “That is why we need the states to be more proactive,” she said.

While several states have issued caps recently, and some like Mumbai, Pune have conducted audits of bills in private hospitals, many lives have already been upended by loans and debts. Some, like Guwahati-based Nath, said they will fight it in court when things become “more normal”. Yet, others are too distraught to do so.

In Hyderabad, Devender, whose brother is still on oxygen support at home, said that the entire time has been traumatic. “The thought of mounting bills when your family member is fighting a disease like Covid is torture in itself. The mind goes blank. We hope no one has to go through this,” he said.

Father of Bihar girl, who cycled 1,200 km with him last year, passes away