Highest oxygen use in Rajasthan to among lowest: How Bikaner govt hospital caught PM attention 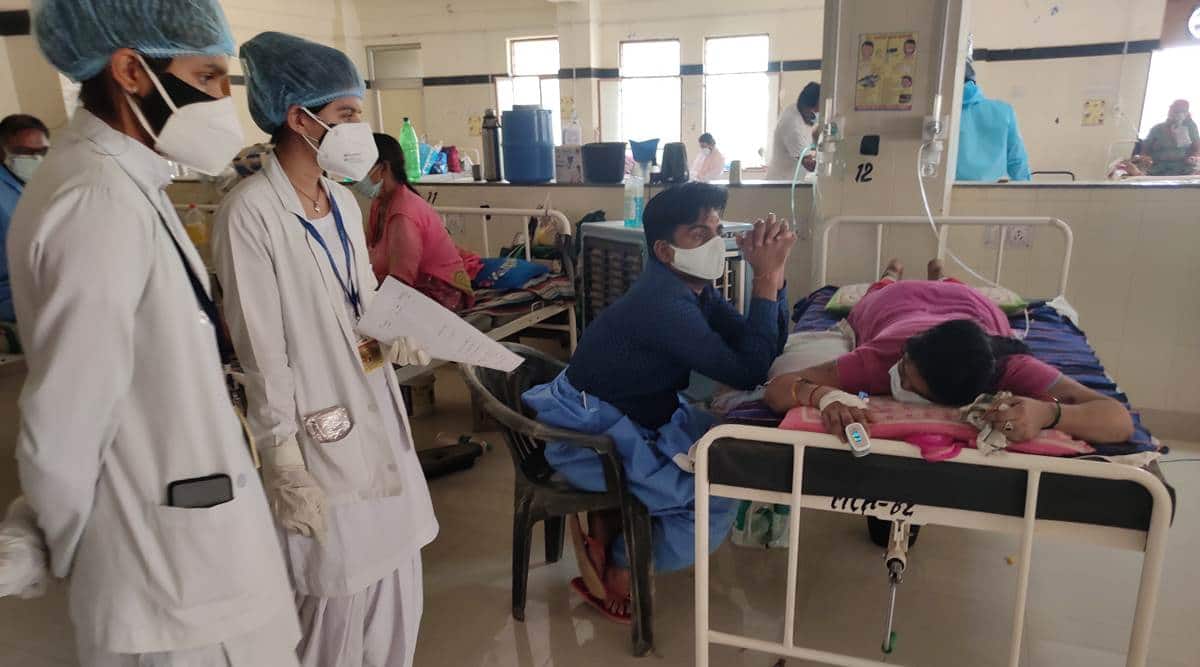 Saroj Choudhary, a final-year nursing student, clips an oximeter on 60-year-old Godavari’s ring finger. The SpO2 level on the bite-sized device reads 86. Her batchmate Pooja Saini, meanwhile, shuffles to the top end of the bed and scans the flowmeter stopper bobbing at 7 litres per minute. Choudhary notes down both the readings.

Together with 140 other students of Bikaner’s Government School of Nursing, Choudhary and Saini are PBM Hospital’s designated ‘Oxygen Mitras’, who have helped halve its daily per patient intake of the precious gas to 2.1 cylinders. In the process, Bikaner’s only government hospital, which accounts for 70% of its hospital load, has put the district from top of the per patient oxygen use table in Rajasthan in April to among the lowest in May.

Bikaner has not lost a single patient to lack of oxygen, points out District Magistrate Namit Mehta. While three deaths at the private Tanveer Malawat Hospital in May were blamed on oxygen, it was more the result of mismanagement of supplies, say officials.

While PBM Hospital got its own oxygen plant in April, it has a liquid medical oxygen (LMO) store tank, and procures from three other plants in the district, it realised in April that the consumption per patient was unsustainable given the high load. Officials say that at the time the hospital accounted for 75% of Bikaner’s oxygen consumption. So, on April 30, it decided to assign 30 oxygen beds to each nursing student for supervision.

Calling these students “our unsung heroes”, PNB Hospital Superintendent Dr Parminder Sirohi says little things made all the difference. “Earlier, while eating or going to the toilet, patients would not turn off the oxygen valve or increase the flow, thinking the more, the better.” Constant monitoring of levels and oxygen flow as well as supervising pronal breathing also helped cut down consumption.

The hospital then did an engineering tweak and rearranged oxygen beds. Says DM Mehta, “Another reason for oxygen wastage was the uniform supply to high-flow (ventilators and BiPAPs) and low-flow patients (through ‘manifolds’, where D-type cylinders are attached to a main line). We segregated critical and moderate patients. Ventilator beds were brought closer to the oxygen plant to ensure they received the required pressure.”

“The pressure of the plant was low and not conducive to critical patients. To solve this, we connected it to our LMO tank, pressure of which was high,” says Abhishek Patra, professor of Community Medicine at SP Medical College.

Dr Shankarlal Jakhar, the hospital’s nodal officer for oxygen, says the most challenging was the last week of April. “We kept running from one wing to another to supply points due to technical glitches or logistical hurdles,” he recalls.

Recently, PBM Hospital has seen its demand again shoot up, though patient numbers are down. “Our oxygen consumption has increased to three cylinders per day per patient due to a higher share of ventilator occupancy, from 10% of the patients in April to 50%,” says Dr Sirohi.

The nursing students, who earlier helped conduct a door-to-door survey in Bikaner for influenza-like illnesses, earn a mere Rs 20 a day stipend. But it’s not money that keeps them going.

Choudhary, who belongs to Churu, says her parents were initially apprehensive about her Covid duties. “I told them what could be more fulfilling than saving someone’s life.”