The death of the Hathras victim and her hurried cremation by the police without letting the family perform her last rites has sparked widespread protests across the nation, with the Opposition demanding the resignation of the UP CM.

With the Opposition intensifying protests over the Uttar Pradesh government’s handling of the murder and cremation of a 19-year-old Dalit teenager in Hathras, Chief Minister Yogi Adityanath Saturday ordered a CBI probe into the incident that has caused nationwide outrage.

CM Adityanath’s directives came even as Congress leaders Rahul Gandhi and Priyanka Gandhi Vadra met the family of the victim who died on September 29, a fortnight after she was brutally assaulted and allegedly gangraped by four upper caste men. Her hurried cremation by the police without letting the family perform her last rites has sparked widespread protests across the nation, with the Opposition demanding the resignation of the UP CM. 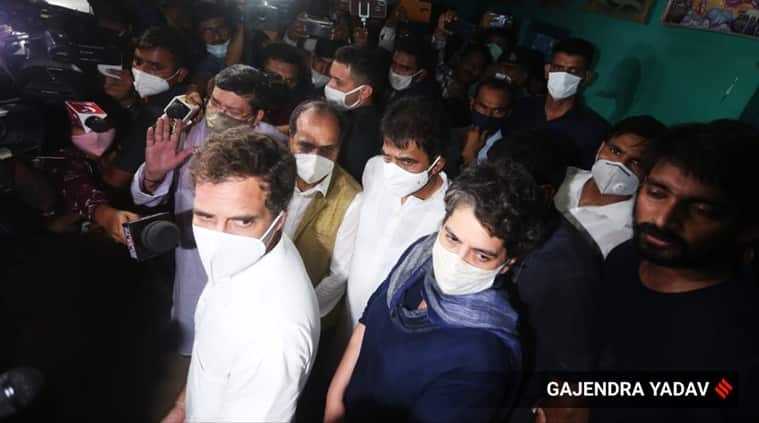 “We will fight against injustice, and fight till justice is done,” Priyanka told reporters after the meeting that lasted about 45 minutes. Rahul, on the other hand, said no power can stifle the voice of the family.

The Congress leaders were permitted to go to Hathras after an intense drama at the Delhi-Uttar Pradesh border earlier in the day. The DND toll plaza at the border had virtually turned into a fortress with heavy police deployment in anti-riot gear ahead of the movement of Congress representatives. Following a massive show of party strength and scuffles at the DND flyway, the Noida Police permitted five members of the Congress delegation to go to Hathras via Noida considering the restrictions imposed under CrPC Section 144. 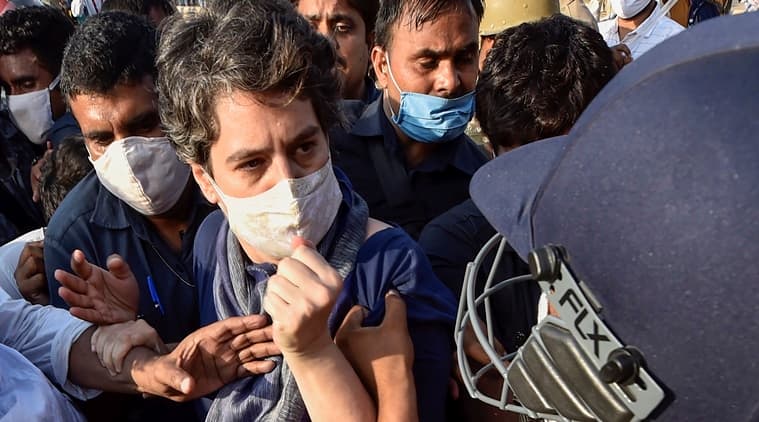 Noida: Police stop Congress leader Priyanka Gandhi Vadra at Delhi-Noida border as she attempts to move towards Hathras to meet family members of the 19-year-old woman who died after being allegedly gang-raped, in Noida, Saturday, Oct. 3, 2020. (PTI Photo)

Scores of Congress and the party’s youth wing workers reached the DND flyway around 2 pm, even as some party workers were allegedly detained by the Gautam Buddh Nagar Police.

KC Venugopal, Randeep Singh Surjewala, and Adhir Ranjan Choudhury were among the other leaders who were granted permission to visit Hathras. This was Congress leaders’ second attempt to reach Hathras – the first, on Thursday, ended in a scuffle after the Uttar Pradesh police refused to let the Gandhis’ visit the Hathras village. Congress party leader Rahul Gandhi crosses a police barricade set up at the border between Delhi and Uttar Pradesh state, as he leaves for Hathras where a Dalit woman was allegedly gang raped, in New Delhi, India, Saturday, Oct. 3, 2020. (AP Photo)

Earlier in the day, ending a two-day standoff, the administration removed barricades outside the victim’s village to allow the media to meet her family after the Special Investigation Team (SIT) completed its probe into the incident, Additional Chief Secretary (Home) Awanish Kumar Awasthi and DGP Hitesh Chandra Awasthy also met the kin of the deceased today.

On Friday, the state government had suspended three police officers, including Hathras Superintendent of Police Vikrant Vir. A government spokesperson said polygraph and narco tests would be conducted on the accused, the victim’s relatives and even police officers involved in the probe. It came a day after the Allahabad High Court took suo motu cognizance of the case and directed senior officials of the state government and police to be present at a hearing on October 12 and explain the sequence of events that led to the cremation and the family’s complaints regarding the manner in which it was done.

As the Congress delegation from Delhi prepared to make its way to Hathras, its Uttar Pradesh unit president Ajay Kumar Lallu and more than 500 workers were put under house arrest, the party alleged. Congress spokesperson Anshu Awasthi alleged that the step had been taken to prevent Lallu from joining party leaders Rahul Gandhi and Priyanka Gandhi Vadra to meet the kin of the victim.

“I’m under house arrest. I am being treated as a criminal,” Lallu was quoted as saying by news agency PTI. “This is only to stop me from going to Hathras and fight for justice for the gang-rape victim.”

“This shows how scared this government is. Is it wrong to fight for the victim or meet the family members?” he asked.

According to Lallu, the police came to his house in Lucknow around 1.30 am and started banging on the door. He was handed over a notice that a case has been filed against him at the Hazratganj police station and he has to appear next Friday. 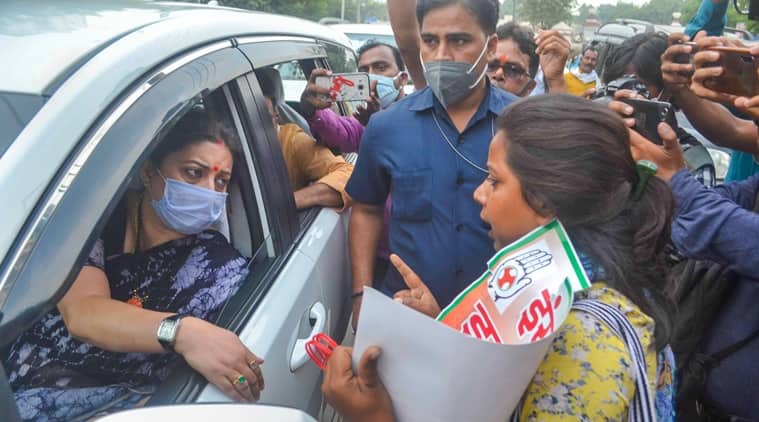 Varanasi: A Congress party activist protests near the vehicle of Union Minister Smriti Irani, over the death of a 19-year-old Dalit woman after an alleged gangrape in UP’s Hathras, during her visit to Varanasi, Saturday, Oct. 3, 2020. (PTI Photo)

Addressing a press conference, the Women and Child Development minister accused the opposition of playing politics on the Hathras issue. “The victim will get justice. I have spoken to the chief minister. Once the SIT submits its report, the chief minister will take action against the accused,” Irani told reporters.

BSP president Mayawati demanded a CBI probe or Supreme Court-monitored inquiry into the Hathras incident, as she said people were not satisfied with the initial investigations in the matter.

“There is tremendous resentment in the entire country over the Hathras heinous gang-rape case. The public does not seem satisfied with the initial probe report. Therefore, this matter should be investigated by the CBI or under the supervision of the honourable Supreme Court. This is the demand of the BSP,” Mayawati tweeted in Hindi.

“Also, the honourable President of the country, who also comes from UP and is a Dalit, it is a strong appeal to him to intervene in this case, keeping in mind the inhuman attitude of the government, to bring justice to the victim family,” she said in another tweet.

BJP is the biggest pandemic of the country: Mamata

Meanwhile, in Kolkata, West Bengal Chief Minister Mamata Banerjee took out a protest rally against the Hathras case and launched a scathing attack against the BJP, calling it the “biggest pandemic” torturing Dalits the most and running a “dictatorship” in the country. Banerjee said she would stand by the Dalit community till the end as her caste is “humanity” and she does not believe in differentiation on the grounds of caste and religion.

Union Minister of State for Social Justice and Empowerment Ramdas Athawale on Saturday said there should not be any politics in the name of atrocities on Dalits which he claimed to have been going on during successive governments in Uttar Pradesh.

“What has happened in Hathras is most terrible. The incident of rape on a Dalit girl is a very serious issue,” he said.

Athawale, who said he will be meeting Chief Minister Yogi Adityanath, stated, “On the Hathras case, I have to say that there should not be politics in the name of atrocities on Dalits. It is not right to propagate about atrocities on Dalits during Yogi government.”

“It is right that atrocities are taking place but it had been so during the Mulayam Singh Yadav, Mayawati, and Akhilesh (Yadav) governments also,” he added.