A few men belonging to the upper caste group staged demonstrations in favour of the accused in the village today.

Reacting to BJP MLA Surendra Singh’s comments stressing on teaching the daughters good values in order to prevent rapes, Rahul Gandhi said, “This is the filthy RSS male chauvinist mentality at work. Men do the raping but women need to be taught good values.” Singh had said that rape cases in the country can be prevented only with “sanskaar” (culture and values) and that parents should ensure to instil good values in their young daughters.

Bhim Army Chief Chandrashekhar Azad on Sunday met the kin of the alleged 19-year-old gangrape victim in Hathras and demanded Y-category security for them. “I demand ‘Y security’ for the family or I’ll take them to my house, they aren’t safe here. We want an inquiry to be done under the supervision of a retired Supreme Court judge,” ANI quoted him as saying. Earlier in the day, Azad was stopped by Uttar Pradesh police personnel while he was on his way to visit the village.

Commenting on the police’s lathicharge on Samajwadi Party (SP) and Rashtriya Lok Dal (RLD) members on Sunday, Hathras Sadar SDM Prakash Meena said that mild force had to be used after the workers started misbehaving with women personnel and broke barricades, news agency ANI reported. “A delegation of not more than 5 people are allowed inside the village. Delegations of SP & RLD came in, we got 5 names listed & allowed them to go there. Eventually their workers started misbehaving with women personnel. They broke the barricadding & pelted stones. One of our COs has been injured. To disperse the crowd we had to use minor force. Situation is under control,” ANI quoted him as saying.

The Trinamool Congress, the Left Front, and the Congress on Sunday lashed out at BJP MLA Surendra Singh’s controversial remarks following the murder and alleged gangrape of a Dalit woman in Uttar Pradesh’s Hathras district.

On Saturday, the BJP leader said rapes could be prevented only if girls were inculcated with “sanskaar [culture and values]”, and not with “shasan [governance]” or “talwar [sword]”. Read more

Shiv Sena leader Neelam Gorhe on Sunday expressed shock over the way the family of the Hathras gangrape and murder victim was being treated and Uttar Pradesh police had “manhandled” Congress leader Priyanka Gandhi on her way to Hathras on Saturday. Read More

Chhattisgarh minister and Congress leader Shivkumar Dahariya has termed the alleged rape of a 14-year-old girl in the state's Balrampur district as a "small" incident while talking about the Hathras case. After the BJP criticised Dahariya and the Congress for the comments, the minister said that his remarks were "misconstrued". --PTI

A Samajwadi Party delegation on Sunday met the family of the 19-year-old woman who died after she was assaulted and allegedly gang-raped in Hathras, and assured them of all possible help. Earlier, the party had alleged that its delegation members were stopped briefly at a toll plaza near Agra by police at the behest of the government when they were on their way to meet the family. "This forcible stoppage is a murder of democracy.... Samajwadi(s) will stand with the aggrieved family in their fight for justice," the party tweeted in Hindi. --PTI

Trade union organisations affiliated with the Centre of Indian Trade Unions (CITU) on Sunday held a protest demonstration here against the alleged gang-rape and murder of a 19-year-old Dalit woman in Hathras district of Uttar Pradesh. Carrying placards and banners, the protesters held the demonstration at Press Enclave here and raised slogans against the perpetrators of the heinous crime, a CITU spokesperson said. He said the burial of the alleged gang-rape victim in Hathras without her family's consent was a blatant denial of justice. --PTI

Bhim Army Chief Chandrashekhar Azad on Sunday met the kin of the alleged gangrape victim in Hathras and demanded Y-category security for them. "I demand 'Y security' for the family or I'll take them to my house, they aren't safe here. We want an inquiry to be done under the supervision of a retired Supreme Court judge," ANI quoted him as saying.

Around 700-800 people held a caste-based meeting at the residence of former BJP MLA Rajvir Singh Pehalvan in Hathras on Sunday on the issue the Dalit woman's alleged rape and death, PTI reported. The meeting was held a day after UP Chief Minister Yogi Adityanath ordered a CBI investigation into the case. Heavy police force was deployed in the vicinity of the former BJP MLA's house, located around 8-9 kilometres from the victim's village.

Pehalvan's son Manveer Singh, who was one of the organisers of the meeting, however, denied that the gathering comprised members from the so-called upper castes and said they were from "different sections of society". "We welcome the CBI inquiry ordered by the Uttar Pradesh chief minister. We have faith in the investigation," Singh told PTI while claiming that the victim's family members were "changing their stand". "The entire scenario has been created to blame the government. The accused persons are in favour of any type of inquiry. But the victims are changing their stand every now and then. They do not want a narco test or a CBI probe. Now they want other kinds of inquiries," PTI quoted him as saying.

The Rajasthan Congress Committee will hold a two-hour silent protest on Monday against the alleged gangrape and murder of a 19-year-old Dalit woman in Uttar Pradesh's Hathras. "The Congress party will hold a 'maun satyagraha' at district headquarters level from 10 am to 12 am on Monday in protest against the incident of Hathras, Uttar Pradesh," PCC president Govind Singh Dotasra said on Sunday. The party will hold the protest to seek justice for the victim's family, he said. --PTI

Hathras Sadar SDM Prakash Meena said that five of SP and RLD workers were allowed inside the village. Later others started misbehaving with women personnel and broke barricades. "A delegation of not more than 5 people are allowed inside the village. Delegations of Samajwadi Party & Rashtriya Lok Dal (RLD) came in, we got 5 names listed & allowed them to go there. Eventually their workers started misbehaving with women personnel. They broke the barricadding & pelted stones. One of our COs has been injured. To disperse the crowd we had to use minor force. Situation is under control," he said.

They broke the barricadding & pelted stones. One of our COs has been injured. To disperse the crowd we had to use minor force. Situation is under control: #Hathras Sadar SDM Prem Prakash Meena https://t.co/Se7XOvY9xA

The upper caste men of the village are still at the spot. They are holding a meeting in favour of the accused. (Express Photo: Jignasa Sinha) 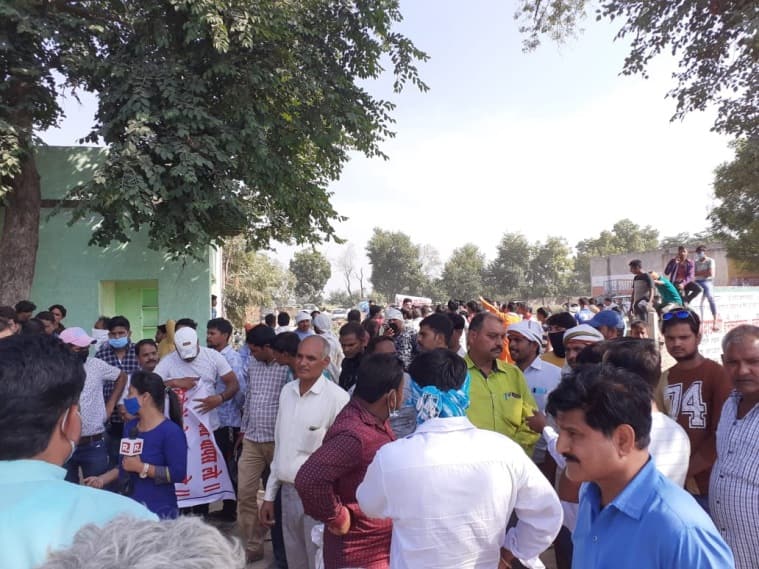 In a remark that is likely to stoke controversy, BJP MLA Surendra Singh on Saturday said that rape cases in the country can be prevented only with “sanskaar” (culture and values) and not with “shasan” (governance) or “talwar” (sword). His remarks came at a time when the alleged gangrape and death of a woman in Uttar Pradesh’s Hathras village has sparked nationwide protests, prompting the Yogi Adityanath government to hand over the case to the CBI. While responding to Shiv Sena’s “Jungle Raj, not Ram Rajya” remark, the MLA said: “I am also a teacher besides a legislator. Such incidents can only be stopped with the help of good values and not governance and violence. Parents should ensure to instill good values in their young daughters.”

#WATCH Incidents like these can be stopped with help of good values, na shashan se na talwar se. All parents should teach their daughters good values. It's only the combination of govt & good values that can make country beautiful: Surendra Singh, BJP MLA from Ballia. #Hathras pic.twitter.com/47AmnGByA3

UP government is trying to hide what happened in Hathras: Kanimozhi

Dravida Munnetra Kazhagam (DMK) MP Kanimozhi Karunanidhi said: "UP government is trying to hide what happened there (in Hathras). The funeral by the police and attack on journalists is strongly condemnable. Moreover, the political leaders who are going there are also being attacked."

UP government is trying to hide what happened there (in Hathras). The funeral by Police and attack on journalists is strongly condemnable. Moreover, the political leaders who are going there are also being attacked: Dravida Munnetra Kazhagam (DMK) MP Kanimozhi Karunanidhi pic.twitter.com/PTv2ZEMRU3

Several men belonging to the Upper Caste today staged a demonstration in support of the accused. Samajwadi Party workers, who were protesting against this group, were lathicharged and dismissed by the cops.

Lathi Charge on SP and RLD workers in Hathras pic.twitter.com/zob3wxn2cT

Chandrashekhar Azad stopped by cops on way to Hathras

Bhim Army chief Chandrashekhar Azad was stopped by the cops while he was on his way to Hathras today. He, along with his followers, are now marching towards the village.

The DMK Women's Wing led by its chief Kanimozhi will hold a candle light march towards the Raj Bhavan in Chennai on Monday, seeking justice for the Hathras victim, the party said on Sunday. DMK President M K Stalin alleged that the safety of minorities, woman and the members of SC/ST community in Uttar Pradesh was "generally a question mark." "The media is also feeling a lack of safety. The Centre has a duty to address this and ensure the safety of all," Stalin said in a statement. "The DMK Women's Wing has proposed to take out a march to the Raj Bhavan insisting on this," he said, adding, Kanimozhi, Lok Sabha MP, will lead the protest.

A medical team today arrived at the residence of the Hathras victim, on the request of Special Invesigation Team (SIT), after her father's health deteriorated, news agency ANI reported.

A medical team arrives at the residence of the victim of #Hathras incident, on the request of Special Invesigation Team (SIT) following a deterioration in the health of her father. pic.twitter.com/A74bPuBMb3

Members of various organizations during a protest against the Hathras case, at Jantar Mantar in New Delhi, Friday. (PTI)

Congress leaders Rahul Gandhi and Priyanka Gandhi Vadra, who were on Thursday stopped en route to Hathras, managed to reach the village on Saturday and spent an hour with the kin of the deceased. “She (Priyanka) sat with me, asked me about my daughter, how she died, what happened on September 14…. She asked about her cremation,” the victim’s mother said after the Congress leaders left.

Amid continuous outrage, the Uttar Pradesh government on Saturday recommended a CBI investigation into the entire chain of events in the Hathras assault and alleged gangrape case, including her hurried cremation without the family’s presence. Besides this, the government has also suspended three police officers, including Hathras Superintendent of Police Vikrant Vir, till now.

There is heightened security in Hathras following the brutal assault and alleged gangrape of a Dalit woman by four upper caste men. The victim had succumbed to her injuries on September 29, and was cremated by the police in haste in the dead of the night on September 30. More than 300 Uttar Pradesh Police personnel, 17 police vehicles, and five barricades are deployed in the village.

In the village, the family of the 19-year-old told The Indian Express they had been shut inside their home for two days, and that the authorities might be monitoring their phones. “DM-ji aaye aur kaha ki jab media yahan nahin to aapke video kaise viral ho rahe hain (The District Magistrate came and said when the media is not being let in, how are our videos going viral),” the brother said, in a brief and hurried phone conversation. “Lagta hai unhone call detail pe laga diye (It seems they are listening to our phones).”

The first barricades are up roughly 2.5 km from the village, located in Hathras district, blocking three entrances. It is at one of these that Trinamool Congress MPs Derek O’Brien, Kakoli Ghosh Dastidar, Pratima Mandal and former MP Mamata Thakur ran into a wall of police and district officials on Friday.