Hathras case: Accused claims he was friends with victim, family denies they beat her

In the letter, the accused has alleged that he and the woman were “friends” who often spoke over the “phone”. 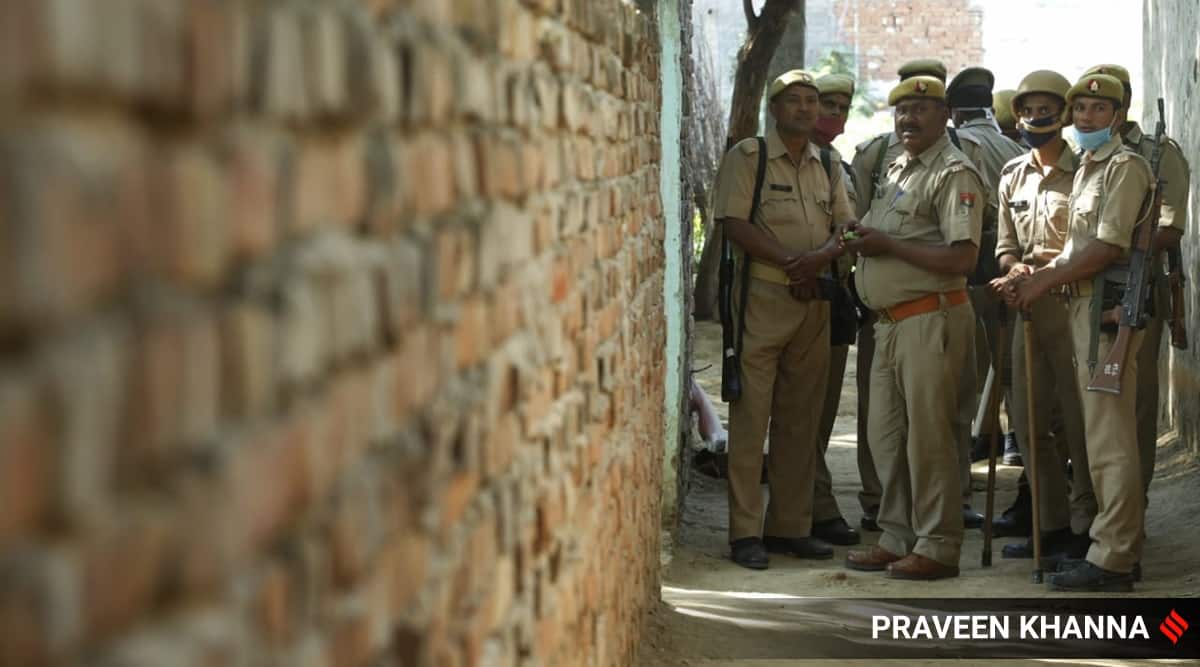 The four men accused in the Hathras assault and gangrape case have written to the Hathras Superintendent of Police, claiming they are “innocent” and that the 19-year-old woman was beaten up by her brother and mother on September 14, the day of the incident.

The 19-year-old Dalit woman had died 15 days after the incident, for which the four upper caste men have been booked. In a statement recorded before a magistrate, she had said she had been raped by the four.

The letter, written by prime accused Sandeep, carries the thumb prints of all four of them, including Luv Kush, Ram Kumar and Ravi, and was sent to the SP late on Wednesday evening. It surfaced in social media on Thursday morning. Alok Singh, the Senior Superintendent of Aligarh Jail, where the four are lodged, confirmed the four had sent the letter.

In the letter, Sandeep says he and the woman were “friends” who often spoke over the phone. “I was arrested on September 20 under a false case. My relatives Ram and Ravi were also arrested along with a local, Luv Kush. The woman (victim) was my friend. We would meet each other and also talk over the phone. Her family was against our friendship,” he says.

The woman’s family called the allegations by Sandeep and the letter another attempt to malign them. “She (the 19-year-old) didn’t have a cellphone and didn’t know how to use one… Sandeep had been harassing her for months,” the victim’s sister-in-law said.

On September 14, Sandeep says in the letter, he had met the woman in the fields, where her mother and brother were present. He alleged that he “left the place when she asked him to do so”. According to him, the villagers later told Sandeep the woman’s family had beat her up because she was friends with him.

Aligarh Jail’s Alok Singh said, “They gave us a letter addressed to the Hathras SP on Wednesday. As per law, we forwarded the letter to the Hathras police in the evening.”

Hathras SP Vineet Jaiswal, brought in after his predecessor was removed over the handling of the case, said he had received the letter. “I have been told that the letter has been written by the accused in which they are alleging their version of the case. The requisite legal proceedings will take place,” he said.

The lawyer of the accused said the police had no proof against his clients.

“We don’t expect there to be a chargesheet. If they file a chargesheet under pressure, it will not stand in court. The family members are involved in the case and the accused have nothing to hide,” said Munna Singh.

Advocate M S Arya, who belongs to the Bhim Army and is providing the family legal aid, called the letter fake. “A fake narrative is being built by the authorities and locals… Why would the victim lie? I spoke to the family over the phone. They told me that the letter is false. We have requested the court to constitute a special committee headed by a retired judge to investigate the matter.”

Arya is representing the family along with Seema Kushwaha, who also represented the December 2012 Delhi gangrape victim.

Arya added, “I am in Hathras and trying to meet the family, but we are facing issues because of the heavy barricading by the UP Police. The family is receiving open threats, their phones are being tapped by the police. Is this the way to treat a victim’s family? They feel unsafe, their neighbours are rude to them. They don’t want compensation, they want justice.”

The victim’s cousin told The Indian Express the police have put up CCTV cameras outside the family’s house, and are not letting anybody in or out. “They are scared of the police, authorities and media now.”

The Allahabad High Court Thursday dismissed a habeas corpus petition claimed to have been filed on behalf of the Hathras family, saying it had been illegally detained by the district administration and should be allowed to travel to Delhi. The court said the matter is already being heard by the Supreme Court, with the family provided security on an observation by it, and it will not be “proper for this court to entertain the petition on merits”.

The high court told the petitioner, Haryana-based Surender Kumar, to approach the apex court if he wanted. Kumar, who claimed to be the national general secretary of the Akhil Bharatiya Valmiki Mahapanchayat, said he was approached by the family members. Additional Advocate General (AAG) Manish Goyal said the family had denied any knowledge of the petition,

Congress general secretary Priyanka Gandhi Vadra, who had visited the family last week, tweeted, “Creating a narrative that defames a woman’s character and holding her somehow responsible for crimes committed against her is revolting and regressive.”

Special story | Looking for a 19-year-old

In her September 22 statement, the woman had said she was raped and that she had not talked about it earlier as she was not fully conscious then. She had been hurriedly cremated in the middle of the night by the UP administration, without the family’s presence. Later, Uttar Pradesh ADG (Law and Order) Prashant Kumar had said her forensic tests didn’t indicate rape.